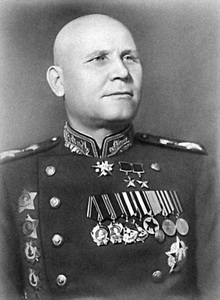 Ivan Konev was one of the most outstanding Soviet generals of World War II. He participated in many of the major military operations against the Germans on the Eastern Front.

Ivan Konev was born into a peasant family in Lodeino, Russia. Ivan’s mother died during childbirth, so he grew up with his father, leaving school early to work in a timber mill. Konev was drafted into the Tsar’s army in 1916 and for two years he fought in World War I, rising to the rank of a junior officer.

After the October Revolution, which destroyed the Tsarist autocracy, in August 1918 Ivan Konev joined the Communist Party. During the Civil War he fought on the side of the Soviet Armed Forces, holding corps commissar posts. After that he held a number of military posts, performing command duties in different divisions and armies. In 1926 he attended an advanced higher course for officers and in 1934 he graduated from the Frunze Military Academy.

Konev managed to survive during Stalin’s massive purge of the military during 1937-1938, when thousands of officers and commissars were either dismissed from the army or arrested and charged with anti-Soviet crimes.

At the beginning of World War II Ivan Konev served as the commander of the 19th Army, in the rank of general-lieutenant. When the Germans invaded the Soviet Union in June 1941, Konev was 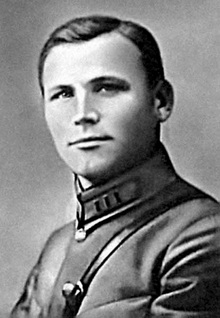 among those who led the first real counter-attack of the war. His army took part in bloody battles, protecting Moscow from the enemy. For successful combat operations Konev received the rank of a general-colonel.

In September 1941 Ivan Konev was appointed Commander of the Western Front, with the responsibility of defending the approaches to Moscow. Within just one month, he suffered a disastrous defeat at the town of Vyazma, with five entire armies becoming encircled. Stalin intended to execute Konev, but the intervention of the new Front commander, General Zhukov, saved him. Starting from this point, Konev’s and Zhukov’s lives intersected many times, making historians consider them rival commanders.

During the course of the war Konev held the post of commander for a number of different armies and his next battles were much more successful. In December 1941, he defeated the army of General Heinz Guderian, the well-known German tank commander. Konev stopped the advance of the Germans onto Moscow by employing the “Konev ambush” - a planned retreat of troops from the center of a battle area, which allowed troops from the flanks to close into the breach in order to trap the pursuing enemy.

In the critical summer of 1942 Ivan Konev stopped a large German force that had been sent to reinforce the German army pounding Stalingrad. Konev was also involved in repelling Germany’s third summer offensive in 1943. 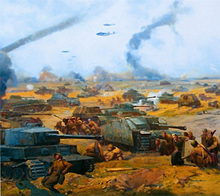 In July 1943, Ivan Konev’s army helped to achieve a huge victory at the Battle of Kursk, which is thought to be the largest tank battle in history. Kursk was the last German offensive of any strategic significance in the east and starting from that point the Germans conducted a fighting retreat. Konev called this battle the “swan song of the German panzers” after which the Soviet Army went on the attack.

During January-February 1944 Ivan Konev’s forces took part in the Korsun-Shevchenkovski Operation, which is known as a classic example of encirclement and then destruction of an enemy’s large grouped force. Before the battle, despite a lack of roads aggravating movement for his forces, Konev regrouped his troops, and unexpectedly attacked the army of the German Field Marshal Erich von Manstein. The Soviet army entrapped around 80,000 Nazi troops and captured more than 230 tanks and assault guns. For this success Ivan Konev was made a Marshal of the Soviet Union.

In July 1944 Josef Stalin announced that he wanted the western border of the Soviet Union to be pushed back across the River Bug to gain the territory that was part of pre-war Poland but was now occupied by the Germans. During the Lvov-Sandomierz Operation, Ivan Konev’s forces encircled 40,000 German soldiers in the town of Brody. Seven days later, when the battle was over, Lvov became a Soviet-occupied territory and part of the new post-war Soviet map.

Ivan Konev’s army became the first to carry the fighting beyond Soviet frontiers. In January 1945 his forces took part in the Vistula-Oder Operation, liberating the city of Krakow and the Nazi concentration camp at Auschwitz. 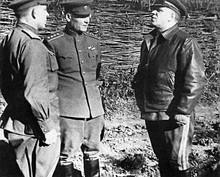 According to some historians, during the Battle of Berlin, Stalin used the rivalry between the two generals, Konev and Zhukov, in order to achieve his military and political goals. Konev tried to gain permission for his army to take Berlin, but Stalin gave that honor to Zhukov. Konev instead was tasked with enveloping the south of the city. However, Stalin didn’t define the exact operation zones for the two armies, providing a certain freedom of movement for the two commanders.

Konev anticipated these circumstances and directed his tank forces towards the German capital. On 21 April 1945, Ivan Konev’s army entered Berlin, whilst Zhukov’s troops entered on 22 April. In order to avoid “friendly fire” Stalin then had to specify the operating zones for the commanders. The honor of capturing the Reichstag was given to Zhukov.

However, Konev liberated several other major territories, including both Prague and Czechoslovakia (now the Czech Republic).

For his contribution to the fight against Fascist Germany, Ivan Konev was twice given the title Hero of the Soviet Union (in 1944 and 1945). 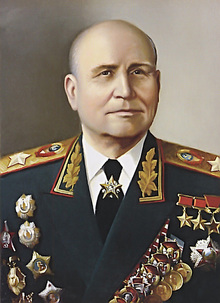 After World War II, Ivan Konev occupied a number of high-ranking military posts, including Supreme Commissar for Austria (1945), Commander-in-Chief of the Warsaw Pact forces (1955–60) and Commander-in-Chief of Soviet forces in East Germany (1961). In 1965 he represented the USSR at Winston Churchill's funeral.

The outstanding Soviet military leader died in Moscow in 1973. He was buried in a place of honor in the Kremlin wall.

Ivan Konev was married twice and had three children.