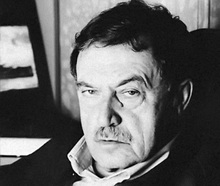 Vasily Aksenov is the dissident, son of dissidents and one of the greatest writers of our time.

His works can justly be described as the annals of our time since they reflect conscientiously Russia’s history during the second half of the 20th century.

As a child Vasily Aksenov sensed how tragic the Stalin era was. He was the son of a party official, Pavel Aksenov, who fell victim to repressions together with his wife, Vasily’s mother.

The childhood of the would-be writer is described in detail by his mother Evgeniya Ginzburg in her book "Steep Route." Evgeniya Ginzburg was a Russian historian and writer. Her name is frequently used in the West. This is one of the stories which frankly recount the horrors of repression and the life of political prisoners.

In February 1937, Vasily’s mother was expelled from the party ranks and then arrested for her alleged connections to the Trotskyites. Her parents were also arrested but released two months later. Her husband was arrested in July and sentenced to 15 years of "corrective labor" with the confiscation of his property. In August, Evgenia was also sentenced to ten years.

After Stalin's death in 1953, Ginzburg was able to visit Moscow and was fully rehabilitated in 1955, as were millions of wrongly convicted - many posthumously.

She returned to Moscow, worked as a reporter and continued her work on her magnum opus memoir, “Journey into the Whirlwind” (English title). After the book was completed in 1967, all attempts to publish it in the USSR failed for political reasons and the manuscript was smuggled abroad, where it was widely published. Eventually, her book included 2 parts, in original Russian entitled "Krutoi marshrut I" and "Krutoi marshrut II" - "Harsh Route" or "Steep Route." 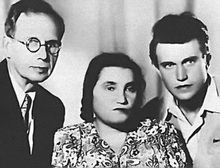 Aksenov vividly recalls his fifth birthday, because that was when he was taken by the Cheka secret police to a home for children of Soviet "enemies of the people," following the arrest of his parents. That night on 20 August 1937, young Vasily slept on a government-issue bed for the first time, burying his tear-stained face in his favorite toy lion. By morning, both Aksenov's toy and his childhood had been snatched from him.

The boy was an involuntary witness to conversations between people who were sentenced for their political views. No doubt, their judgment influenced the world outlook of the would-be writer.

Aksenov graduated from the Leningrad Medical Institute in 1956 and worked as a doctor until 1960, at which time he turned professional writer.

Vasily Aksenov had become a celebrity following the publication of his first novel, “Colleagues,” in the immensely popular Yunost youth magazine in 1958. This million-copy success was followed by “Ticket to the Stars,” a national bestseller which made Aksenov famous across the whole of the Soviet Union.

The novels are keynoted with a love of freedom of thinking; their appearance was possible owing to the so-called period of "ideological thaw" upon which writers of younger generations pinned much hope. Aksenov's realistic novels brought him fame. They appear to be the author's confession; he makes wide use of young people's modern language. This was inadmissible in literature at that time and sparked criticism by the authorities. The author won a reputation as a trouble-maker. Prestigious publishing houses rejected his new works. Yet Vasily Aksenov was not one to be stopped in such a way. Shortly his novels "Oranges from Marocco," "It's Time, My Friend" and others in which he rather ironically portrays Soviet realities, appeared.

In the 1960s and 1970s, Vasily Aksenov's popularity was comparable to that of a pop star. Fans flocked in their thousands to his readings, and spent hours discussing Aksenov's characters. But after Aksenov immigrated to the US and was stripped of Soviet citizenship, being an Aksenov fan became a dangerous pastime. “The Burn” and “Island of Crimea” had to be smuggled into the country, and secretly copied and distributed. Owning them was punishable by seven years in a labor camp and by five years of internal exile.

The word "shestidesyanniki" – or "people of the Sixties"– owes its existence to Aksenov. First used in a review of his “Colleagues,” the term was later to become a popular by-word not only for a new Soviet generation, but also the entire post-Stalin era of cultural and political detente known as "the thaw". Vasily Aksenov's prose, Vladimir Vysotsky's music, drama at Moscow's Taganka Theatre, Yevgeny Yevtushenko's poetry and Andrey Tarkovsky's films were all symbols of free thought closely associated with the "shestidesyatniki" movement.

There were also rumors that Aksenov was behind the publication of the famous “Metropol,” a collection of texts by 25 poets and writers, previously censored in the USSR. That was not true, although he was undoubtedly the spiritual leader of the almanac.

Nevertheless, his books were smuggled into the USSR and distributed widely, despite the fact that possession of one of his novels was enough to land one in trouble with the KGB.

There was even one story of a reader who boiled his copy of “Island of Crimea” in a huge cooking pot, so that if the KGB burst in to search the flat, they would have found glue instead of the banned book. 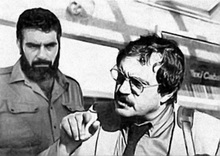 “Island of Crimea” is a book about a personified dream. The Crimea is a peninsula, yet in his book Aksenov tells about an island which does not know the socialist way of life. It is inhabited by descendants of Russian noblemen. Even the title of the book contradicts common sense and sounds like a mockery of everything that is routine. In fact, this is a nostalgic and clever story. In 1980 after severe criticism by the news media the writer was deprived of his Soviet citizenship. He learnt about this when he was on a business trip in the United States.

Ten years later, Aksenov returned to Moscow. The crowd that gathered to meet him at Sheremetyevo airport was, however, ultimately disappointed. Their idol had arrived at the personal invitation of the US Ambassador, John Matlock, and was to stay at his residence. This was a year before the 1991 putsch would put a full stop to the history of the USSR.

Communist authorities at various stages attempted to tame the youthful talent and turn him into a young "communist writer" but his character, tempered in a children's home, and later in the Gulag town of Magadan, where his mother had been exiled – made these attempts futile. Instead, each new Aksenov publication triggered another stream of ideological tensions.

"There were several turning points in my life. The biggest one was not the emigration to America, but my arrival in the Gulag town of Magadan at the age of 16 to join my mother. After being separated from her for 11 years, it was like meeting her for the first time. It was a transition to an entirely different life. At the time, Magadan was the freest city in the Soviet Union. Many people there were not afraid to speak their minds because they had nothing to lose after they had gone through hell. The worst that the authorities could do to them was to send them back to a labor camp."

All the same, his books continued to be published, however grudgingly. In the period of détente, authorities were obliged to tolerate the existence of a writer whose books had already been translated into many languages.

In emigration Vasily Aksenov continued to write - in both Russian and English. Yet his main theme continued to be life in Russia, with all its merits and drawbacks. In the United States Aksenov wrote “In Search of Melancholy Baby,” a story which compares Russia and the United States. He also wrote a novel which he called "Moscow Saga," a tale of three generations of Russian intellectuals.

Western critics wrote that "Saga" is something like Lev Tolstoy's "War and Peace" of the 20th century. A life-story of one family is closely intertwined in the novel with numerous historical events and their interpretation.

Despite having lived abroad for decades, Aksenov says he is a Russian writer. When he is called a Russian émigré in the West he patiently corrects, saying "I am not an émigré, I am Russian." Recently he was a frequent guest of Moscow. In his interviews he says: "Moscow has changed greatly. I had never thought this possible. To my mind, Moscow has never been so lavish, so adventurous, so bright and extravagant as it is today. I think that today Moscow is one of the world's leading centers outstripping London and New York in many respects. Unfortunately, the world has not come to realize this."

After returning to Moscow permanently, Aksenov became a modern cultural leader once again. His trilogy, “The Moscow Saga,” was made into a popular 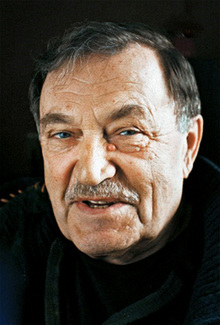 TV film, while a new but still vintage Aksenov found expression through short stories, collections of essays, and novels such as “The New Sweet Style,” “Voltairian Men & Women,” “Moskva-kva-kva” and “Rare Earths.” He became a TV personality and his behavior was as marvelously unpredictable as ever. He could stroll into a court session and shake hands with Mikhail Khodorkovsky or dine with president-to-be Dmitry Medvedev. Some thought him a liberal and "Westernizer", others a conservative and near-nationalist. Even those who came to detest him acknowledged that he was one the brightest stars in the Russian literary firmament, unconcerned by political or critical acceptance.

Vasily Aksenov has been married twice. His son Aleksey (born in 1960) by his first wife, Kira, is an art director at Mosfilm Studios. His present wife, Maya, was formerly married to the Soviet documentary filmmaker Roman Karmen. Indeed, her affair with Aksenov was a major source of gossip among the Moscow literati in the 1970s. Aksenov's “The Burn,” about life in Moscow at the time, is dedicated to Maya.

Vasily Aksenov believes that in the new century signs of serious changes have appeared in literature. The genre of the novel could disappear entirely or be radically reformed. Interest in novels has been declining. Other genres could appear and people will remember novels as today they remember Homer and Russian folk epics. As for poetry, this genre is eternal; it will exist as long as mankind exists.

Running through Aksenov's work is a constant longing for a civilized, affluent and happy Russia over a traditionally gloomy, impoverished, downtrodden and isolated present. He looks to break out of the inferno, into freedom and tranquility, into a country whose people have regained their dignity.

“Art, as I hope I have shown, plays a pivotal role in both the search for immortality as well as the battle against those that oppress us.” - Aksenov.