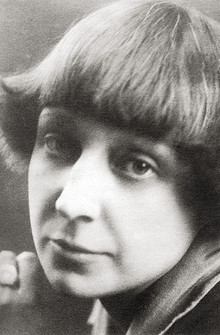 One of the most original and sincere Russian poets of the 20th century, Marina Tsvetaeva used her own complex personality and feelings as her primary source of inspiration.

Marina Tsvetaeva was born in Moscow into the family of Ivan Vladimirovich Tsvetaev, a professor of art history who founded the world-famous Pushkin Museum of Fine Arts – the largest museum of European art in Moscow. The project took some 25 years of his life and much of his attention which otherwise could have been devoted to his children.

Marina Tsvetaeva’s mother, Maria Aleksandrovna, nee Mein, was a romantic woman, deeply rapt in music and books, whose maximalist perception of the world and personal unhappiness greatly affected the unfolding talent of her young daughter.

Marina’s childhood was traditional for her class. The family had servants – a cook, a gardener, housemaids and nannies for the children. The Tsvetaev family spent summers in a cottage in Tarusa – a picturesque little town on the bank of the Oka River, and the rest of time they lived in a one-storey house in Moscow’s Trekhprudny Pereulok – “a spacious house full of magic,” “the soul of my soul,” as Marina described it – which is portrayed in many of Tsvetaeva’s poems. The children were well cared for and knew the joy of Christmas parties, theater visits and masquerades. 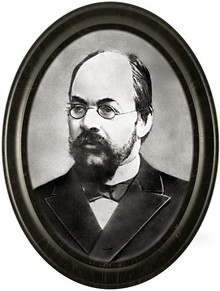 But a deeper look into the family’s inner world leaves a less joyful impression, and a rather disturbing one. Marina’s parents’ marriage was not a union of love, and moreover, they never overcame the feelings for their loved ones – Ivan Vladimirovich for his first wife, Varvara Ilovayskaya, with whom he had two children, and Maria Aleksandrovna – for the man whom her father forbade her to marry.

As a result, despite the seemingly smooth relations, they lived in separate worlds. Maria Aleksandrovna’s depressed mood was deepened by the fact that she, a gifted pianist, taught by Anton Rubinstein, was prohibited from making a career as a musician by her father, a good but very conservative man.

Maria Aleksandrovna longed for a son but had only daughters, Marina and her younger sister Anastasia. She hoped that at least her elder daughter would become a musician and little Marina whose mighty talent showed itself very early (she started writing poems at the age of six and not only in Russian but also in French and German) had to devote four hours a day to piano exercises. 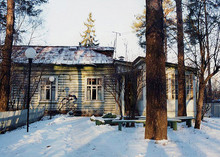 After Maria Aleksandrovna contracted tuberculosis in 1902, the family started traveling around Europe searching for milder climates, which at the time were considered helpful for recovery. For three years the Tsvetaevs lived abroad – in Italy, Switzerland, France and Germany; then they moved to Crimea and in 1906 returned to Tarusa where Marina’s mother died that same year.

Husband for a lifetime

After Maria Aleksandrovna’s death the family house in Trekhprudny Pereulok no longer had the same charm for Marina Tsvetaeva. She entered a high school in Moscow but never aimed to do well in all subjects, studying only the things she was interested in.

From early childhood Marina Tsvetaeva read a lot on a wide range of subjects – history, art, science. At the age of 16, she went to Paris on her own to attend a course of lectures on Old French Literature at the Sorbonne.

In 1910 she published her first book of verse, “Evening Album” – a book of very personal, unvarnished, confessional poems, which at once attracted the attention of such acknowledged Russian poets as Maximilian Voloshin, Nikolay Gumilev and Valery Bryusov. 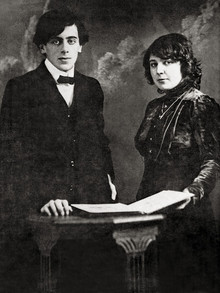 It laid the foundation of Marina’s friendship with Voloshin, which played a momentous role in her life. In 1911, in Voloshin’s house in Koktebel, Crimea, she met her future husband, Sergey Efron.

He was a year younger and very beautiful, with a tragic family story – his father had died and his mother had committed suicide – which made him even more attractive to Tsvetaeva. She fell in love with him, and the ideal of nobleness and knighthood that he represented. Marina’s love for Efron was a combination of admiration, spiritual union and maternal care.

Within a year they were married. Marina Tsvetaeva often had affairs, including affairs with women. Perhaps the most widely known is an affair with poet Sofia Parnok which resulted in a cycle of poems which at times Tsvetaeva called “The Girlfriend,” and at others “The Mistake.”

Tsvetaeva needed affairs as a source of stormy emotions necessary for writing her poems. For instance, a passionate connection with Sergey Efron’s friend Konstantin Rodzevich inspired “The Poem of the Mountain” and “The Poem of the End.”

Nevertheless, she always returned to her husband. They had three children – two daughters, Ariadna and Irina, and a son, Georgy.

Marina Tsvetaeva treated all her children differently. She was very proud of her elder daughter whom she always called Alya – as Tsvetaeva confessed, she called her Ariadna for the “romanticism and arrogance that rule my whole life.” Mother and daughter were very close and Alya took after her mother, already in her childhood starting to write poems, which Marina Tsvetaeva considered worthy to be published.

She didn’t have similar feelings for her second daughter and when in hungry post-revolutionary Moscow she couldn’t feed them both, Marina left her younger girl in an asylum where the two-year-old died after about three months, in February 1920.

As for Marina’s son Georgy, who was born in 1925 – she actually didn’t like the name and called him Mur – Marina loved him obsessively and indulged him as she could though he was a difficult and demanding child. 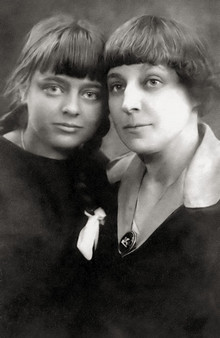 After the 1917 Bolshevik Revolution, Sergey Efron joined the White Army of the Tsar’s supporters and Marina stayed behind in Moscow with two small children. As everyone in the city, they lived in terrible poverty. Having no money, Marina had to sell her possessions and books, accept whatever aid she was offered and use furniture for firewood.

Marina Tsvetaeva tried to work but soon stopped, as she wanted to devote as much time as she could to writing. She was desperate but surprisingly, her talent blossomed and during that period she wrote more than 300 poems that were later united into the “Milestones” collection, the fairy-tale poem “The Tsar Maiden” and six romantic plays.

Many of her poems were devoted to Moscow, one of the major themes of Tsvetaeva’s poetry.

In 1921 Tsvetaeva received news about Sergey, who, after the end of the Russian Civil War, found himself in Prague and Marina set off for Europe too.

She and Alya spent some time in Berlin and then headed for Czechia. There, in a little village near Prague, Tsvetaeva’s family spent about three years. The life was hard and they were constantly short of money, but the period was very productive in terms of Tsvetaeva’s poetry.

In 1925 the family moved to France. At the time Paris was the center of Russian emigration. Tsvetaeva attended numerous literary soirees and clubs. Her works were published, though they were mainly prose. To earn a living, she had to write more prose but she never enjoyed it as much as she enjoyed writing poems.

Meanwhile, her husband was homesick for Russia – even Soviet Russia. He became an activist of the “Returning to the Motherland” union and got involved with the NKVD – the Soviet police organization of the time.

In 1937 both Sergey Efron and Ariadna left for the USSR. Sergey’s departure was more of an escape. Tsvetaeva was interrogated by the French police but she didn’t seem to know anything about Sergey’s alleged work for Soviet intelligence.

Tsvetaeva’s return to the Soviet Union was predestined. In June 1939, Marina and her son Mur arrived in the USSR. But the family reunion didn’t last long.

Shortly afterward Ariadna and Sergey were arrested. Tsvetaeva was left without a roof over her head and no money. She found shelter in the Union of Soviet writers’ house, her only income coming from translations. 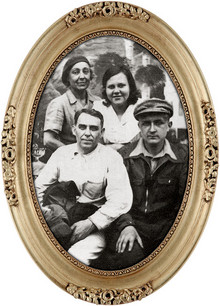 When in 1941 the Nazis started bombing Moscow, Marina Tsvetaeva and her son were evacuated to Yelabuga, a town in the Tatar Soviet Socialist Republic (now Tatarstan).

She desperately sought work and even applied for a dishwashing position but was refused. On 31 August 1941, Tsvetaeva hanged herself.

Marina Tsvetaeva’s exact burial place was never found. Her husband, Sergey Efron, was executed in August 1941 – the same month that she committed suicide. Her 19-year-old son Mur was killed in World War II, in 1944.

Ariadna Efron served over eight years in prison and later spent six years in exile in Siberia. After Stalin’s death she was rehabilitated and wrote memoirs about her famous mother.