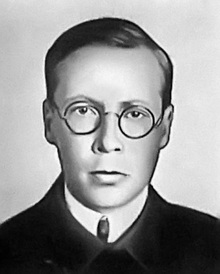 Nikolay Alekseevich Zabolotsky, an outstanding Russian author of the Soviet era, was a poet, children’s writer and translator. He was a member of Leningrad’s last avant-garde group, OBERIU (the “Association of Real Art”). Today the books of this once forbidden and suppressed author are shelved among the literary classics.

Who were the Oberiuts? Born in the early years of the 20th century, they were practically children at the time of the 1917 October Revolution. They were the last representatives of Russian modernity; they transformed and completed the entire spectrum of that modernity from mystically disposed Symbolism to avant-garde leftist futurism.


Zabolotsky was born into a family that had only just risen above its peasant origins. His father was a local agricultural advisor and his mother had been a schoolteacher. He grew up in the village of Sernur (now in the Republic of Mari El) and the small town of Urzhum, in the rural province of Vyatka. By the age of seven, he had apparently chosen his future career. After a good but unremarkable education at school, he became an indigent student first of medicine in Moscow, and then of literature at the Herzen Educational Institute in Petrograd (now St. Petersburg) during the stricken years following the Revolution. He was briefly tempted by academia, but his desire to become a professional writer prevailed.

Zabolotsky was arrested in 1938 and spent six and a half years in prison and two more in exile. He wrote of this experience in “The Story of My Imprisonment” (not published until 1988). Yet he survived and managed to re-establish himself as a writer. 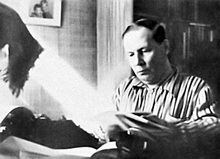 His first book of poetry, “Columns,” was a series of grotesque vignettes on the life that Lenin's NEP (New Economic Policy) had created. It included the poem “Zodiac's Dimming Every Feature”, an absurdist lullaby that, 76 years later, in 2005, provided the words for a Russian pop hit. In 1937, Zabolotsky published his second book of poetry. With his “Second Book of Verse” he attempted, brilliantly but unsuccessfully, to reconcile his originality with the dictates of “Socialist Realism.” This collection showed the subject matter of Zabolotsky's work moving from social concerns to elegies and nature poetry and is notable for its inclusion of pantheistic themes.

Zabolotsky was a thoroughly professional man who saved his liveliness for his poetry. He also made his mark early with “Scrolls,” a collection of verse distinguished by its pictorial energy and inventive rhyming. A disciple of the painter Pavel Filonov, he transposed the maitre's colorful and grotesque visions into verbal landscapes of urban life, reflecting the tenets of the OBERIU, whose manifesto of 1928 Zabolotsky helped write, and whose key techniques were unexpected transitions, absurd coincidences and brevity of montage. Zabolotsky aimed to free the poetic word from the semantic freight of poetic tradition. Making poetic language strange was a way of rediscovering the world.

A philosophical strain emerged in a second collection that was banned at the last moment in 1932. Influenced by the fashionable utopian doctrines and evolutionary theories of Fedorov and Konstantin Tsiolkovsky, in the 1930s, Zabolotsky developed a complex Naturphilosophie in his long poems, most famously in “The Triumph of Agriculture” (1933) where the speakers, who are animals, articulate a belief in the union of man and environment.

Although not anti-Soviet, this work was hardly in tune with the usual hymns to Stalin's policy of collectivization. The penalty was a decade in the Gulag that left him a broken man. Following his release, he settled in Moscow, where he mainly worked as a translator. What remained of his creative spirit went into translating poetry from Old Russian and Georgian, including Rustaveli's epic poem “The Knight in the Panther's Skin” as well as more modern Georgian poets such as Vazha-Pshavela, Grigol Orbeliani and David Guramishvili. 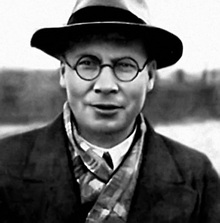 The last few years of Zabolotsky's life were beset by illness. He suffered a debilitating heart attack and, from 1956 onward, spent much of his time in the town of Tarusa. A second heart attack claimed his life on 14 October 1958 in Moscow. The first unexpurgated edition of his “Complete Works” appeared in 2002.

Death of a Medic

In a land far remote,
Near the end of the earth,
Foreman lay by a road,
For he couldn't move forth.
His heart must have been strained
Or forgotten, his flask,
But no strength there remained
To deliver the task.
What the peasants there deemed,
Drove them into dismay,
For their medic, it seemed,
Short of consciousness lay.
Still a rider was quick
To fly settlement-bound,
And in languor the sick
Took a slight look around.
And from under the sweat,
Through a twilight of mind,
An intelligent thread
With a shiver replied.
And, uncertain, he rose,
And in darkness he rode,
Gave the rescuing doze
To the man by the road.
In the crowd, in the light,
In the steppe at dawn,
An old hero in white,
He collapsed and was gone.
To the power of one
There can not be an end.
To his deathbed he'd gone,
And still did what he meant.

Zodiac's dimming every feature
Over pasture's endless ward.
Sleeping is the Canine creature,
Dozing is the Sparrow bird.
Healthy-bottomed mermaids scatter,
Float directly heaven bound.
Hands like branches, only fatter,
Breasts like turnips strong and round.
A witch on a triangle climbs,
Turns into a puff of smoke.
With the forest demon's wives
Deadman dances the cakewalk.
Following in pale choir
Single Fly the warlocks chase
And beside the hill and higher
Stands the moon's unchanging face.

Zodiac's fading every feature
Over buildings of the town,
Sleeping is the Canine creature
Flounder fish is lying down.
Guardsman's rattler tap-tap-tap
Spider being takes a nap
Sleeps the cow, the fly is sleeping,
Over land the moon is creeping.
Giant bowl above the land
Full of water, which was spilled.
Demon holds a log in hand
From his fuzzy-flurry beard.
In a cloud a siren's waiting,
Little ankle in descent.
A cannibal is lacerating,
Biting privates off a gent.
All is mixed in shared ball
And in each direction whiz
Apes and British one and all,
Witches, corpses, fleas.

Candidate of bygone time
Leader of the newer years
Freaks you list - o mind of mine -
Nothing more than thoughts and fears.
Raving thoughts, imaginations,
Only dreams, hallucinations,
Unforgiving tribulations,
None of which in life appears.

High on earth here we reside.
Late, so late. It's time to sleep.
Poor warrior you, my mind,
Why not peace till morning keep?
What are worries, yours and mine?
Day has passed, and you and I
Half divinities half swine,
Sleeping near a newer time,
On its very doorstep lie.

Guardsman's rattler tap-tap-tap
Spider creature takes a nap
Sleeps the cow, the fly is sleeping,
Over land the moon is creeping.
Giant bowl above the land
Full of water, which was spilled.
Snoozes the potato plant.
You as well to sleep should yield.