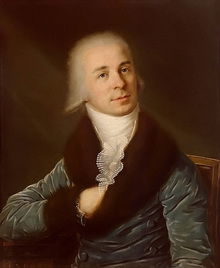 Gavriil Romanovich Derzhavin was a first-rate Russian poet of the late 18th and early 19th centuries. His poetic achievement was seen by contemporaries as the crowning jewel of an entire epoch. Translations of his works into many languages ensured him an international recognition never before achieved by a Russian poet. Just before his death, Derzhavin sat in on the final exam of a rising young star, Aleksandr Pushkin, who was barely in his teens at the time. Upon hearing Pushkin's verses dedicated to the lyceum at Tsarskoe Selo, from which he was graduating, Derzhavin, overcome by emotion, shed tears of approval. This incident is usually treated in the history of Russian literature as a sign of the transition between two literary epochs in Russia - between the eighteenth century and the so-called golden age of Russian literature.

I am the link of all existing worlds,
I am the outer brink of matter,
I am the focal point of living things,
I am the starting place of the divine;
Although my flesh rots into ash,
My mind commands the thunderbolts,
I'm king-I'm slave - I'm worm-I'm God!
But though I am miraculous,
Whence did I come? - that no one knows.
I could not by myself have risen.

Creator, I am your invention!
I am a creature of your wisdom.
O, source of life, bestower of blessings,
My soul and king!
According to your iron laws
My self eternal must needs pass
Across the borne of death;
My spirit's clothed in mortal garb
And I return through death alone -
To your eternity - O, father! 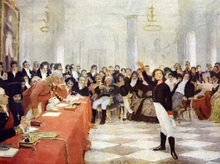 While Derzhavin favored the ode genre, he differed from the poet Lomonosov in that he did not consider it a laudatory form. His style is more reminiscent of the Roman lyric poet and satirist, Horace (65 B.C. - 8 B.C.). Derzhavin first caught Catherine the Great's attention with his ode to her, “Felitsa,” named after a character in Catherine's own story “The Tale of the Prince of Khlor.” Here he broke several taboos, praising the sovereign not with awe, but with easy familiarity. She walks “on foot,” eats, reads, writes, enjoys jokes and treats people nicely. Derzhavin then contrasts her to the petty, self-centered nobles surrounding her, with their feasts, fancy dress and endless entertainments. Derzhavin sharply criticizes court life in “The Courtier” and “To the Potentates and Judges,” lampooning the unjust bureaucrats and parasitic aristocracy.

Derzhavin's poetry and memoirs present a rich and complex portrait of his time, employing a diverse range of topics from war and peace to love and dining. Open to the influence of all contemporary currents and at ease with various philosophical perspectives, Derzhavin is remembered as the poet who loved truth more than he loved kings. In his poetry he was a defender of justice and an independent spirit. Politically, however, Derzhavin remained a staunch monarchist and general opponent of liberal ideas. Along with Admiral Aleksandr Shishkov (a defender of serfdom), Derzhavin established the “Colloquy of Lovers of the Russian Word” - a formal literary society with as many as five hundred members whom Derzhavin would invite to his large home on the banks of the Fontanka in St. Petersburg.

The presence of Derzhavinian time imagery can be detected in the works of later Russian poets such as Pushkin, Tyutchev, Fet and Mandelshtam. With its emphasis on the ode and on emulation of literary models, Derzhavin's poetry represents the culmination and expansion of Russian Classicism, rather than the first step toward Russian Romanticism. 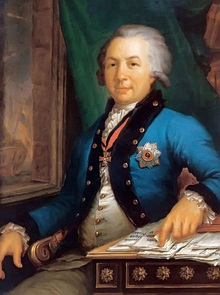 Derzhavin was also a Russian statesman. He served first as Provincial Governor in Tambov (a city in south-central European Russia founded in 1636 as an outpost against the Crimean Tatars) in 1786 - 1788. A man of the Enlightenment, he became poet laureate and served as Minister of Justice for Catherine II from 1802 to 1805. Derzhavin also served briefly as Catherine's private secretary.

Derzhavin was the first Governor of Olonets Province. He became the Olonets Governor 13 years after the suppression of the Olonets peasant uprising in Kizhi (1769-1771) and demanded from peasants’ strict performance of all duties assigned to them, remembering that “ruin and poverty quite often are the reason for greater impudence and crimes.” Derzhavin was also interested in the activity of the Aleksandrovsky Foundry in Petrozavodsk, the largest state enterprise of the region. He was one of the first people to address the problem of wildlife preservation and protection of the Karelian woods. Derzhavin fulfilled many of the provincial reforms of Catherine II. As a result of his work on the ascertainment of borders between Russia and Sweden, plans of district cities and maps of the Olonets Province were made.

In the summer of 1785 Derzhavin left to review the Olonets Province. He traveled about two thousand kilometers by boat and by horses. Throughout this difficult and 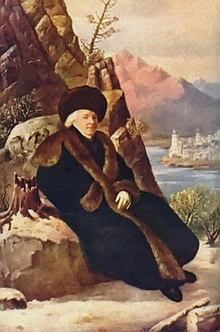 dangerous journey he kept a journal, containing valuable data on life in the region in the 18th century, including the first descriptions of Kivatch waterfalls, provincial and district cities, the originality of the Karelian culture and language, the “five-string psaltery,” the Karelian cantle, the northern Old Belief religion and much more. The first Governor of Olonets Province also accomplished much work on the organization of public health services, national education and charity in the region.

Derzhavin personally opened the Olonets Public Charity Department, whose primary goal was to manage national schools, hospitals, shelters, and so on. He actively participated in replenishing this department's means and before departing he donated 100 rubles for charitable purposes (a considerable amount of money at the time). Derzhavin also had a hand in the opening the first state hospital in Petrozavodsk (where treatment was free-of-charge), the development of the hospital’s charter and the drugstore attached to it.

The period of Derzhavin's residence in Petrozavodsk, Karelia was remembered by the poet in a well-known ode, “The Waterfalls,” which marks the beginning of the Karelian theme in Russian poetry. The poem “Storm” and the libretto of the opera “The Miners” are also closely related to the region.

Derzhavin was born in Kazan to poor landowner parents. His distant ancestor Morza Bagrim relocated from the Great Horde to Moscow in the 15th century. Nevertheless in the 18th century Gavrila Derzhavin’s father was only a poor country squire, who died when Gavrila was still young. Derzhavin received a slight formal education, entering Kazan High School in 1759. The level of education was substandard and he did not even receive his degree. In 1762 Derzhavin was called to serve in the Preobrazhensky Guards and he remained in the regiment until 1772, when he received an officer's commission.

Derzhavin rose from the ranks of a common soldier to the highest offices of state under Catherine the Great. He first impressed his commanders during the Pugachev rebellion. Politically astute, his career advanced when he left military service for civil service. He rose to the position of Governor of Olonets (1784) and Tambov (1785), became the personal secretary to the Empress (1791), the President of the College of Commerce (1794) and finally the Minister of Justice (1802). He retired in 1803 and spent the rest of his life in his country estate at Zvanka near Novgorod, writing idylls and Anacreon tic verse. He died in 1816 and was buried in the Khutyn Monastery near Zvanka. Under Soviet rule, his remains were transferred to the Novgorod Kremlin but were later returned to Khutyn.