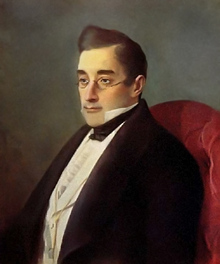 Aleksandr Griboyedov proved himself as a man of many talents: he was an insightful Russian diplomat, an endowed playwright and a composer. Griboyedov is often referred to as homo unius libri, a writer of one book, who won his laurels for the brilliant verse comedy “Woe from Wit,” still very timely and one of the most frequently staged plays in Russia. “Woe from Wit” takes precedence over the finest modern satires, like Nikolay Gogol’s “Dead Souls,” which lampoons the bureaucracy of Imperial Russia, and Mikhail Bulgakov's satiric short stories of “The Soviet State.”

Aleksandr Griboyedov was born in Moscow on 15 January 1795. Like his contemporary, Aleksandr Pushkin, he was raised in a well-to-do upper class family and traveled in wealthy circles of society. A very talented young boy, he was home-schooled, but received a very profound education. In 1803 he studied at the University Boarding School, which he left for the Moscow University in 1806, graduating in 1812 at the age of fifteen with a master’s degree in philology. One of the most well-educated people of his time, he had a strong command of French, English, German, Italian, Greek and Latin, and later he added Arabic, Persian, and Turkish to his linguistic arsenal.

With the start of the Napoleonic War in 1812, he obtained a commission in a hussar regiment and served in the cavalry. In 1816 he resigned and entered the civil service in the foreign office in St. Petersburg. Simultaneously, he lived a fulfilling social life and was very welcome in the theatrical circles of the capital. He translated many foreign dramatic pieces and produced some of his own. He commenced writing early and, in 1816, he introduced on stage at St. Petersburg the comedy in verse “The Young Spouses” (1815), followed by “One’s Own Family Or Married Bride” (1817) and other works of the same kind. But he was not remembered neither for these, nor for the essays and verses he wrote - he was remembered for the immense success gained by “Woe from Wit,” a satire ruthlessly exposing Russian aristocratic society with its hypocrisy and mercantilism. 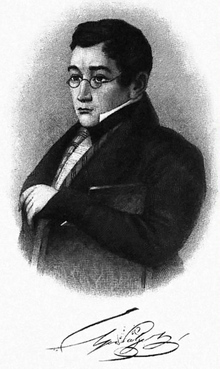 In 1818 Griboyedov was appointed secretary of the Russian legislation in Persia. One of the reasons for the transfer, which could be interpreted as an exile, was his participation in a duel.

After three years in Persia, in 1822, Griboyedov was transferred to Georgia as a secretary of foreign affairs for General Yermolov, the Georgian Commander-in-Chief. It was there that Griboyedov wrote acts 1 and 2 of “Woe from Wit.”

In the spring of 1823 Griboyedov was allowed a leave and retuned to Russia, dividing his time between Moscow and his friend’s estate where he wrote acts 4 and 5 of “Woe from Wit,” which he completed in 1824. Griboyedov took off to St. Petersburg. He pinned his hopes on his many connections, aspiring to have the play published without troubles and even put on stage. However, his dreams never came true: the play was immediately and unconditionally rejected by censors. Only parts of it were allowed to be published in an almanac in 1825. Griboyedov never saw his play published: the full publication in Russia didn’t happen until 1831, the same year it was first brought to the stage. Still, Griboyedov’s masterpiece immediately made its way to the public and marched triumphantly into the history of Russian literature: copies of it were reprinted and distributed privately, the number of issues approaching what would have normally been the number of the legally printed editions. The Decembrists assisted largely in the distribution since they saw the play as a herald of their ideas. Aleksandr Pushkin’s best Lyceum friend and one of the Decembrist leaders, Ivan Pushchin, brought a full copy of the play to Pushkin, who was in exile in Mikhailovskoye at the time. 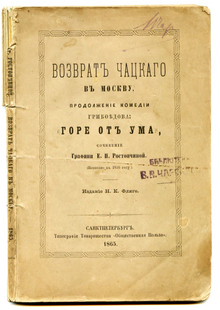 The huge success of the comedy was accounted for by its sharpest examples of wit and eternal topics. Against a background of pre-Decembrist times – disputes about serfdom, political freedom and Russia’s path in history – and pictured through a set of brilliantly and meticulously drawn characters, so familiar to their contemporaries, the writer addressed the major issues of humanity: the romantic triangle, the fight of generations, the antagonism between a progressive person and an orthodox judgmental society. The social and official personages represented in the play impress with their accuracy, like Famusov, the rigid aristocrat, lover of the old regime and execrator of liberal thought, like many of the model family men of the nineteenth century, or his secretary, Molchalin, a servile back-scratcher, who would sell his own mother just to rise up the career ladder. The hero of the piece, Chatsky, the satirist, very intelligent and sensitive, recently back from Europe, exposes and ridicules the sins of the rest, becoming a cult-figure among the younger generation of the 1820s, some of whom made an attempt to put the words into action through the Decembrist military insurrection of 1825, but failed and were punished by Emperor Nicolas I. Rooted in the classical French comedy of Molière, the characters were as much individuals as archetypes. The verve and appropriateness of the language explains the fact that practically half of the play was scattered in the masses as aphorisms.

In the fall of 1826, Griboyedov returned to the Caucasus, but in February of 1826 he was detained and brought to St. Petersburg to face trial for his alleged participation in the Decembrist Uprising on 24 December 1825. Griboyedov was in serious danger since four of the Decembrists named him as a member of the group, while copies of “Woe from Wit” were found practically in the home of each insurgent. Warned by General Yermolov, Griboyedov managed to destroy a huge chunk of his archives and was able to exonerate himself in court.

He returned once again to Georgia in 1828 and even fought in a number of battles during the Russo-Persian War (1826-1828). Simultaneously he made himself useful through his linguistic skills to his relative, Count Ivan Paskevich, and gained renown in the diplomacy department and was branded by Commander Muravyov-Karsky as a person “worth twenty thousand.” He was the one to prepare the Peace Treaty of Turkmenchay, which was very beneficial for Russia. For his assistance he was appointed a Minister Plenipotentiary to Persia upon returning to St. Petersburg. Instead his long-dreamt-of literary career – he already had notes for his new pieces, “Georgian Night” and “1812” – he was forced to accept the high rank. 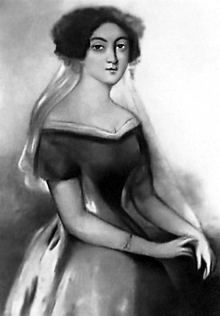 Griboyedov last departed from the capital in June 1828. On the way to Persia he stopped in Tiflis (Tbilisi) for a short while, nurturing plans for the economic revival of the Caucasus. In August he married Nina, the 16-year-old daughter of his friend, Prince Chavchavadze, and took her to Persia with him.

In the aftermath of the war and the humiliating Treaty of Turkmenchay, anti-Russian sentiment in Persia was rampant and, soon after Griboyedov's arrival in Tehran, a crowd of Islamic religious fanatics stormed the Russian embassy.

The incident began when two enslaved Armenian girls managed to escape from a harem of a Persian Shah. They sought refuge at the Russian embassy. As agreed in the Treaty of Turkmenchay, Armenians living in Persia were permitted to return to Eastern Armenia. However, the Shah demanded that Griboyedov return the fugitives. Griboyedov refused, as he knew what sort of fate awaited them. His decision caused unrest throughout the city and several thousand Persians besieged the Russian compound demanding the return of the Armenian girls.

At the last moment, Griboyedov reluctantly decided to give them up when the mob broke into the compound. The Cossack detachment assigned to protect the embassy was too small in number but held off the mob for over an hour until finally taking refuge in Griboyedov's office. There, he and the rest of the Cossacks held out even further until the mob broke through and slaughtered them all. Griboyedov's head was cut off and his body thrown onto a rubbish heap.

Griboyedov’s body was so ill treated by the mob for three days that it could be recognized only by a scar from the old duel on his hand. His body was taken to Tiflis and buried in the Monastery of Saint David. His 16-year-old widow, Nina, on hearing of his death, gave premature birth to a child, who died a few hours later. She lived another 30 years after her husband's death, rejecting all suitors and winning universal admiration by her fidelity to his memory. The inscription on Griboyedov’s tombstone says, “Your wit and your feat are immortal in the Russian memory, but why did my love outlive you?”