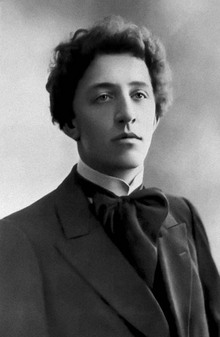 From cradle to literature

Blok was born on November 28, 1880, in St. Petersburg. The son of a lawyer, musician and writer, he didn’t remember much of his father as his parents separated soon after his birth.

He grew up in his mother’s family, a richly intellectual milieu, where his talent and potential was generously indulged. His grandfather was the head of St. Petersburg University, while his grandmother, mum and aunts were writers and translators; the little boy was exposed to literature from the cradle.

In 1898 Blok entered the law faculty of St. Petersburg University, but three years later his predilection for literature overcame him, and he switched to Philology. By 1906 he was already a recognised poet. 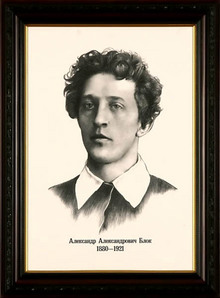 His first efforts were inspired by the early 19th-century Romantic poetry of Vasily Zhukovsky and Aleksandr Pushkin. It wasn’t until he reached university that he learnt about Symbolism, a literary trend which became popular in the 1890s and later influenced Blok’s poetry and life.

He spent all his summers in the family’s country house in Shakhmatovo, an estate which neighboured the world-famous chemist Dmitry Mendeleev .

It was there that Blok fell in love with Mendeleev’s daughter, Lyubov, and married her in 1903. His first book called Verses about the Beautiful Lady (Stikhi o Prekrasnoy Dame, 1904) was dedicated to Lyubov and brought him fame. He was greeted enthusiastically both by patriarchs of the Symbolist movement and also the younger generation.

By this time Blok was already under the influence of the philosophy and mystical poetry of Vladimir Solovyev.

His wife became the main source of inspiration as the unachievable ideal of a woman, a symbol of the World Soul and Eternal Femininity (like Greek Sophia in Solovyev’s philosophy). Blok kept this religious worship of his love for all his life which almost destroyed his family, as the couple rarely had sexual relations.

Instead, he had numerous extramarital affairs, thinking his relationship with his wife must not be spoiled by sex. Their relations even worsened when Blok’s friend and fellow Symbolist Andrey Bely also fell in love with Lyubov Blok. The two friends almost ended up in a duel.

Blok’s early poetry, dedicated mostly to his ideal of a woman, is full of symbols and mysticism. It reflects an impressionistic view of the surrounding world. Rhythm, music and sounds were of huge importance to the him.

His next poetry collections differed markedly from his first one and depicted everyday life, revolutionary events, human psychology and tragic love, in works like Inadvertent Joy (Nechayannaya Radost, 1907), Snow Mask (Snezhnaya Maska, 1907), Faina (1906-1908), and Earth in Snow (Zemlya v snegu, 1908). By this time Blok was established as a leader of Russian Symbolism, though some of his peers accused him of betraying the ideals reflected in his first collection.

The poet’s later works mostly reflected his thoughts on Russia: its past and future, the path it chose and the drastic changes it was undergoing at that time. They included the collections Night Hours (Nochnye Chasy, 1911), Poems about Russia (Stikhi o Rossii, 1915), Motherland (Rodina, 1907-1916) and the epic Retribution (Vozmezdie, 1910-1921). 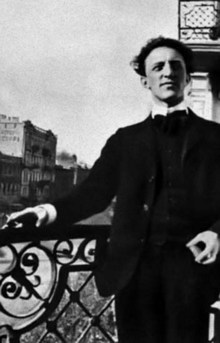 Before the revolution of 1917, Blok wrote in his diary that he knew “a great event was coming”, and his thoughts and concerns about Russia’s future are reflected in his verse as well as political and social essays.

Drafted in 1916, Blok never took part in active combat during World War I, and served with an engineering unit near the city of Pskov until March 1917.

Blok and the Bolshevik Revolution

Surprisingly for most of his colleagues and admirers, Blok enthusiastically welcomed the Russian Revolution of 1917. He considered it an outburst of cathartic power and experienced a boost of creativity which was crowned with his best-known poems The Twelve (Dvenadtsat, 1918) and The Scythians (Skify, 1918).

The Twelve depicts a group of Red Army soldiers (a clear allusion to the Twelve Apostles) marching through revolutionary Petrograd and led by the figure of Christ – an image strongly condemned by Russian intellectuals. It featured numerous artistic devices like distinctive sounds, clear and chopped rhythms, gloomy colours, repetitive symbols and slang language – all of them helped to capture the mood of the time and Blok’s ambivalent view of the revolution.

Despite its controversy, over a million of copies of the poem were sold in the first year and it was even prohibited in some countries as blasphemous.

Blok quickly became disillusioned with the Bolsheviks and their methods of governing, and soon he even stopped composing poetry. From 1918 till 1921 he worked as an essayist, editor, translator, publisher and theatre worker in different government organisations and publishing houses.

From time to time he recited his verse in public in St. Petersburg and Moscow. His last remarkable public speech in February 1921 was called On the Poet's Calling and was dedicated to Aleksandr Pushkin. Blok considered him the greatest poet of all time, capable of uniting Russia in the difficult time of the Russian Civil war. 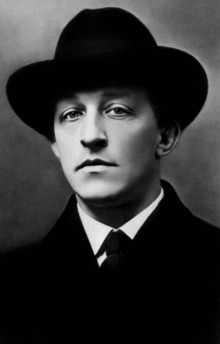 Aleksandr Blok died on August 7, 1921 in Petrograd (now St. Petersburg) of unknown causes, although it’s believed deep depression and nervous and physical exhaustion might have played their part. Some say that, along with his mysterious death, the old pre-revolutionary Russia was also gone.