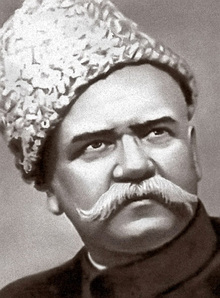 Vladimir Gilyarovsky was a Russian writer and journalist, best known for his recollections of life in Moscow on the verge of the 20th centuries. He was also one of the most colorful figures in Russian history.

Gilyarovsky was born on 8 December 1855 (according to church records; 1853 according to his own writings) on a manor near Vologda in northern Russia where his father worked as an assistant to the local bailiff, a Zaporozhian Cossack whose daughter he later married. His cheerful audacity and good nature probably came from his parents along with his last name, which derived from the nickname “Hilaris” (meaning “cheerful” in Latin), which was given to his grandfather when he entered the seminary. Gilyarovsky’s grandfather never became a priest, but the nickname stuck and was transformed into a Russian last name.

Vladimir’s mother died when he was not yet eight and his education was mostly the handiwork of his grandfather's cousin Vasily Yugov, an ex-sailor with a strong sense of adventure. He taught the young boy horseback riding, boxing, wrestling and everything else he needed for a life of exploits.

At 17, Vladimir dropped out of school after flunking a test and ran away from home leaving a note saying he was going to work as a manual laborer on the Volga (the river has always symbolized the spirit of freedom in Russia). This meant he would become a burlak (a manual barge hauler), a rugged occupation that required extraordinary physical strength and endurance. Thankfully, Gilyarovsky had inherited such strength from his father. Much later, when the grown-up prodigal son came home and, just for fun, tied a poker in a knot, his father got angry but did not say a word to his son; he simply took the poker and undid the knot. Vladimir had always admired the people who hauled heavy-laden barges up and down the river; they seemed to him the embodiment of manly brotherhood.

Later Gilyarovsky recalled that the idea came to him when he was a schoolboy after reading the banned novel “What's To Be Done” by Nikolai Chernyshevsky (1828 - 1889), an ardent advocate of social reforms. A main character in the book, Rakhmetov, who slept on nails to toughen his body, also became a burlak. Besides the radical literature of the day the decision was influenced by a number of political exiles living in Vologda Province in the middle of 19th century.

His father, however, found Vladimir amidst the burlak gang and made him enter a military school. But Vladimir had already tasted the spirit of freedom, and once again he dropped out and took up the life of adventure. During the first decade after leaving home, Gilyarovsky wandered around the country trying a variety of odd jobs that hardened him both morally and physically. A far from complete list of his occupations includes: docker on the Volga, firefighter, worker at a toxic lead paint factory in Yaroslavl and horse-herder. He even joined a circus and enraptured the public with the daredevil stunt of racing on an unsaddled horse. 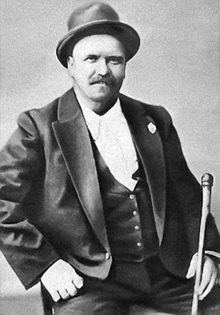 In the mid-1870s Gilyarovsky came to Saratov where he mingled with the local wandering actors, did some performing and even wrote a couple of unpretentious plays. He also got a taste of war. The young man volunteered in the Russo-Turkish War of 1877-1878. The entire troupe saw him off. He was a scout and was always on the most dangerous sections of the front, receiving a St. George Cross for conspicuous valor.

After the war Gilyarovsky returned to the theater, this time in Penza. But in 1881 he moved to Moscow, and from then on his entire life and literary work would be linked to this city. In that same year he published his first poem devoted to the Volga, and it opened his way into Russian literature. Gilyarovsky's first stories were published in different Moscow periodicals in 1883 - 1885. Very soon he won praise and notoriety as one of the best crime reporters in Moscow and became the recognized king of reporters, a journalist who knew today what was going to happen tomorrow. He described this ability in these words, “Many can see the facts. However, it is up to reporters to take a careful look at things. I love my profession with all my heart, and plunge into it, often risking my life. Not a single time was my report turned down. Each was strict, verified, and pure truth.”

This seemed even more amazing since Gilyarovsky covered every aspect of life, ranging from theater and society to crime. He had a perfect knowledge of Moscow, particularly, the districts of crooks, homeless, beggars, drunkards and thieves avoided by most Muscovites. However, Gilyarovsky was not scared. He sympathized with the hopeless, deeply understanding the tragedy of their situation and they appreciated his sympathy, often asking him for help and getting it. Uncle Gilyai, as he was known, gained the acquaintance of all the vagabonds and criminals in Moscow. His name is always associated with Khitrov Market, the most criminalized neighborhood in Moscow before the revolution.

There is always a sense of authenticity about Gilyarovsky's works; one can feel that he was there when the event he described was happening. He was also an excellent storyteller, as numerous accounts by writers attest, and was much renowned for his wit. Apart from friendly relations with many Muscovites, he managed to create his own network of paid informers in the various strata of Moscow society; the city was at his fingertips.

The leading writers of the day, Gleb Uspensky, Mikhail Saltykov-Shchedrin and Anton Chekhov hailed the rising star of Russian journalism and in 1887 persuaded him to publish his first book “The Slum People” (recording his experiences with the Moscow underworld, the Moscow of poverty and crime) only to see it banned by censors and the entire print run destroyed for its grim portrayal of reality. However, this did not stop Gilyarovsky from continuing his work, writing and publishing essays, stories and verses.

Anton Chekhov was right: to describe Gilyarovsky's nature is a nearly impossible task. Konstantin Paustovsky did it, however, providing this short but all-embracing characterization: "If only an expression like ‘picturesque character’ really existed in the Russian language, it would fit this man perfectly. Gilyarovsky was really picturesque, both in his biography, looks, speaking manner, his childishness and in his many-sided and bubbling talent.”

In 1896 Gilyarovsky wrote what would probably become his most famous report from the site of the notorious Khodynka disaster, in which thousands of people were crushed to death during celebrations of the accession to the throne of the new Tsar Nicholas II.

Vladimir Gilyarovsky was in the unique position of being able to bridge the gap between 19th century Russian classics and the writers of the 20th century. He left behind some very eye-opening descriptions of Leo Tolstoy, Gleb Uspensky, Maxim Gorky, Valery Bryusov, Alexander Blok and, his best friend, Anton Chekhov with whom he started his literary career at a small-time newspaper. Uncle Gilyai joked that, at first, he was even paid better than his famous friend. Chekhov, who fully returned his friend's affection, once admitted: "I've tried to describe you, but you're breaking all the rules! You should have been born 300 years ago, you don't belong in this century..." Chekhov was not the only one who saw in Gilyarovsky a man of another epoch. Strong and powerful, with long moustaches and his sheepskin at his side, Uncle Gilyai looked like an archetypal Cossack and indeed descended from the so-called Zaporozhye Cossacks, those free Ukrainian warriors who wrote many a glorious chapter in 16th-18th century Russian history.

Appropriately enough, Ilya Repin portrayed Gilyarovsky among the characters of his famous painting showing the Zaporozhye Cossacks writing a letter to the Turkish Sultan. Sculptor Nicolay Andreyev also made use of Uncle Gilyai when working on the monument to the great Russian author Nikolai Gogol. We can see Gilyarovsky dressed as the Zaporozhye Cossack, Taras Bulba, among the other Gogolian characters depicted on the monument's pedestal. A strong admirer of Gogol's literary genius, Gilyarovsky appreciated this inclusion. It was Gilyarovsky who thoroughly documented Gogol's birthday (31 March 1809) and found the house where the great writer was born in the Ukrainian township of Sorochintsy. Using the materials collected during that fact-finding mission, Gilyarovsky published a report and held a memorial exhibition. In appreciation of this work, he was elected a member of the Russian Society of the Art of Letters, like Pushkin, Tolstoy and Turgenev before him. 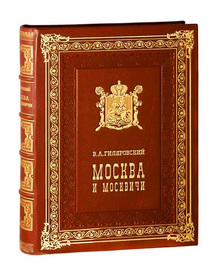 In 1924 Gilyarovsky resumed his writing career, and, already advanced in age, turned his eyes to the past and published, one after another, the famous series of memoirs, including “Moscow and the Muscovites” (1926), “My Wanderings” (1928), “Friends and Encounters” and “Newspaper Moscow” and “Theatre People” (published posthumously), recording his memories of the newspaper business of pre-revolutionary Moscow and creating a sort of encyclopedia of Moscow life at the turn of the 20th century. No one produced a more extensive and trustworthy record of those days. While Gilyarovsky was not a writer of the caliber of Leo Tolstoy or Anton Chekhov, his prose was simple and his works described everyday existence, scrupulously creating a panorama of the life of various social classes in Russia that is hard to find even in many classics of Russian literature.

Although Gilyarovsky was influenced by radicalism in his younger years, he was never affiliated with any political parties and this is perhaps what saved him from prosecution by the various regimes under which he found himself. However, his attitude to the authorities at large could be well described by the following aphoristic impromptu dropped on the occasion of the first performance of Leo Tolstoy's play The Power of Darkness: “Russia is plagued by two great misfortunes - the power of darkness at the bottom and the darkness of power at the top.”

In spite numerous dangers, including mortal ones, he lived almost 83 years sticking to his own recipe for longevity: “Don’t let anybody or anything scare you, never be angry, and you will live 100 years.”

The writer who had led a life of adventure for many decades died quietly in Moscow, the city that became his own, on 1 October 1935. The house in Stoleshnikov Lane at the very heart of Moscow now boasts a memorial plaque with only three words emblazoned on it: "Vladimir Gilyarovsky, a writer."