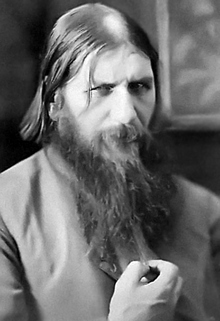 Grigory Rasputin, a wondering peasant who eventually exerted a powerful influence over Nicholas II and Aleksandra, the last Tsar and Tsarina of Imperial Russia, is one of the most mysterious and dark individuals of Russian history.

Grigory Rasputin was born 10 January 1869 in the small and remote Siberian village of Pokrovskoe. Even as a young man he astonished people; there was talk about him having visions and the ability to heal. According to one legend, one day Rasputin was lying in bed sick when a group of peasants walked in to find out who had stolen a horse. Grigory rose from his bed and pointed at the thief among them. The insulted peasant denied it, and Grigory was beaten. That night, two wary peasants followed the suspect and saw him leading the horse out of his shed and into the forest. Rasputin gained a reputation as a visionary, although some were scared of the boy and thought he was possessed by the devil. It was a time and place where all possible magic and heeling powers were a way of life. Grigory himself thought that he was taken over by a higher force. He was also a drunk, got into fights and harassed women. He got married when he was around twenty and had four children.

A visit to a monastery in Verhoturye changed him; it was his first encounter with a ritual form of religion. He ended up staying there for months. Rasputin then left his home to become a ‘strannik,’ a pilgrim or wonderer. His journey took him as far as Greece and Jerusalem. He sometimes walked for days without eating or stopping; he didn’t wash or even touch his body for months and wore shackles to increase the hardship of his journey. It is believed that during his travels he may have encountered a secret sect called the ‘hlysty.’ They organized a particular kind of worship in which there were no priests; in one part of the service they sang and prayed and became almost drunk by spinning; in the other part they indulged in flagellation and orgiastic sex. This type of worship, they thought, would bring them closer to God. ‘Driving out sin with sin’ was the concept that Rasputin later adopted. After his travels of more than two years he returned to his village of Pokrovskoe. The locals saw a change in him; he was perceived by some to have a luminescent religious essence and was even called a ‘staryets’, a wondering holy man, by others. 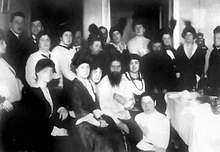 Even before his arrival in St. Petersburg in 1903, the city was agog with mysticism and aristocrats were obsessed with anything occult. Rasputin met Bishop Theophan, who was at first shocked by Rasputin’s dirty look and strong smell, but he was nonetheless mesmerized by the ‘holy’ man and shortly introduced him to the Montenegrin princesses, Militsa and Anastasia, who also fell under his spell. He was then introduced by the sisters to Nicholas II and Aleksandra (the Tsar and Tsarina). Aleksandra was impressed by him straight away and he became a regular visitor to the palace; she spent hours talking to him about religion. Rasputin would tell her that she and the Tsar needed to be closer to their people, that they should see him more often and trust him, because he would not betray them, to him they were equal to God, and he would always tell them the truth, not like the ministers, who don’t care about people and their tears. These kinds of words touched Aleksandra deeply; she absolutely believed that he was sent to the royal family by God, to protect the dynasty. To her, Rasputin was the answer to their hopes and prayers. The Tsar and Tsarina shared with him their concerns and worries, most importantly, over their son Aleksey’s (the only male heir to the throne) health. He suffered from hemophilia. Rasputin was the only one who was able to actually help their son, how he did it will always remain a mystery, but Aleksey got better. The palace governor wrote in his memoirs: “From the first time that Rasputin appeared at the heir’s bed, he got better. Everybody at court remembers the episode in Spala, when no doctor could help the suffering and moaning child, but as soon as a telegram was sent to Rasputin, and they received an answer that the boy would not die, his pain eased straight away.” Everyone who met Rasputin remarked on his eyes and how hypnotic they were. Elena Dzhanumova wrote in her diary: “What eyes he has! You cannot endure his gaze for long. There is something difficult in him, it is like you can feel the physical pressure, even though his eyes sometimes glow with kindness, but how cruel can they be and how frightful in anger…” 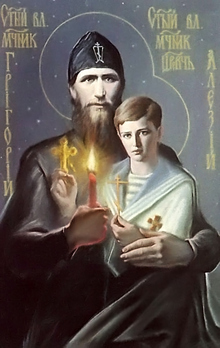 Nicholas also trusted Rasputin. He became his advisor whose one word was enough to place an unknown person as a minister at court. But Nicholas sometimes decided government questions of a higher scale by himself. Rasputin was strongly against the First World War (1914 - 1918) and tried to convince the Tsar to make peace with Germany, but Nicholas held his ground and took Russia to war, which was a disaster for his country, with more than four million Russians loosing their lives.

Rasputin lived in an apartment on Gorohovaya Street. There, peasants and aristocrats came to visit him. Peasants and the city’s poor worshiped Rasputin and believed in his holiness and sometimes asked for help and money, and aristocrats, knowing his influence at court, visited him only to gain his favor and use it for their career growth or just because it was ‘fashionable.’ He also seduced women with his charm, preached and entertained. It was rumored that he organized his own sect performing religious sex rituals. Many reports of Rasputin’s unholy behavior reached Nicholas. But he dismissed these reports of Rasputin’s outings to bathhouses, beatings and violent sex with society women and prostitutes. He laughed them off by saying “the holy are always slandered.” Even Bishop Theophan tried to tell Nicholas to distance himself from Rasputin, but for this he was relieved of his post and banished.

In December 1916 Rasputin sent a letter to Nicholas about his own death: “I

feel that I shall leave life before January 1st. I wish to make known to the Russian 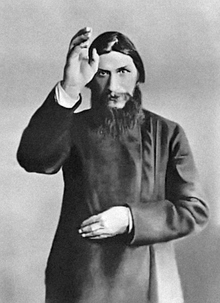 people, to Papa (the Tsar), to the Russian Mother (the Tsarina) and to the Children what they must understand. If I am killed by common assassins, and especially by my brothers the Russian peasants, you, the Tsar of Russia, will have nothing to fear for your children, they will reign for hundreds of years. But if I am murdered by boyars, nobles, and if they shed my blood, their hands will remain soiled with my blood for twenty-five years and they will leave Russia. Brothers will kill brothers, and they will kill each other and hate each other, and for twenty-five years there will be no peace in the country. The Tsar of the land of Russia, if you hear the sound of the bell which will tell you that Grigory has been killed, you must know this: if it was your relations who have wrought my death, then none of your children will remain alive for more than two years. And if they do, they will beg for death as they will see the defeat of Russia, see the Antichrist coming, plague, poverty, destroyed churches, and desecrated sanctuaries where everyone is dead. The Russian Tsar, you will be killed by the Russian people and the people will be cursed and will serve as the devil’s weapon killing each other everywhere. Three times for 25 years they will destroy the Russian people and the orthodox faith and the Russian land will die. I shall be killed. I am no longer among the living. Pray, pray, be strong, and think of your blessed family. ”

Rasputin was mostly hated among the nobles, especially Nicholas’s family members. He appeared to them as a drunk, a dirty man who infiltrated his way into the royal family, who appointed and dismissed ministers, and for over ten years was the central figure in Petersburg’s scandal news and at the same time ruled over the Tsar in some strange way. Prince Felix Yusupov (husband of the Tsar’s niece Irina) wanted him dead and wasn’t alone. The Tsar’s cousin, Grand Duke Dmitry Pavlovich, and Vladimir Purishkevich, a member of parliament wished to get rid of Rasputin and his demonic influence. The three invited Rasputin to the Yusupov Palace on December 30, 1916 to meet the Tsar’s niece. While waiting for her to appear, Rasputin was offered wine and his favorite cakes laced with a tremendous amount of cyanide. Hours went by and the poison did not affect Rasputin. Dismay and fear came over Yusupov who reached for his gun and shot Rasputin. Everyone was sure that it was the end of him, but miraculously he staggered out of the palace. Vladimir Purishkevich ran after Rasputin and shot him again in the back, but it was only when they threw his body into the Neva River that he died. Just ten weeks after his death, the Romanov dynasty was overthrown during the Russian Revolution of 1917. Less than two years later, Nicholas and his entire family were executed.

The topic of Rasputin to this day comes up in literature, cinema and even music. Seventies pop group Boney M had a hit single “Rasputin” with the memorable lyrics “Rah, rah, Rasputin, lover of the Russian Queen.” More recently in Fox’s animated film, “Anastasia,” Rasputin is portrayed as the traitor monk who casts a curse on the Romanov family. Rasputin aroused different feelings in the people who surrounded him. Some felt fear, others deep veneration, and still others hatred - and even now the attitude towards him is ambiguous. He’s either a holy miracle worker or a charlatan.