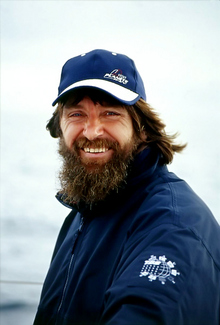 Fyodor Filippovich Konyukhov is a Russian traveler, artist and writer. He has completed over 40 unique expeditions and mountain climbs.

He was born in the village of Chkalovo in Ukraine’s Zaporozhye Region. From his early years, he felt the urge to travel and to discover the world and its many aspects, and prepared himself for future expeditions, though not always intentionally. He learned to swim and dive well, to sail oared and wind-driven boats, he bathed in ice-cold water and slept in the open. In school he had no equal in football and long-distance running. Most of all he felt attracted by the sea. Konyukhov was raised in a simple peasant family, together with his two brothers and two sisters. They were accustomed to hard work in the field and in the garden and Fyodor’s father, a fisherman, often took him to the Azov Sea for the fishing season. Fyodor took pleasure in standing shifts at the steer and helping fishermen draw their nets. Fyodor’s father, a World War II vetran, often told his children about the hard-fought battles against the Nazis. Young Fyodor was enchanted by the stories his grandfather, a lieutenant colonel of the tsarist army, told him about the polar explorer Georgy Sedov, with whom he had served in the same garrison. Before his final trip to the Arctic, in which he perished, Sedov gave his friend an orthodox Christian pendant cross, and asked him to pass it on to the most able-bodied of his children or grandchildren, who might be able to fulfill his dream of reaching the North Pole. Fyodor Konyukhov would turn out to be just the man to do it: he reached the Pole three times, including once alone, with that very pendant cross on his chest.

Fyodor went on his first expedition when he was fifteen. He crossed the Azov Sea in an oared fisherman’s boat.

Fyodor Konyukhov graduated from the Odessa Naval College and the Leningrad Polar College, becoming a professional navigator and marine engineer. In 1977 he organized yacht voyages following the routes of Vitus Bering and other sailors and explorers of the Northern part of the Pacific Ocean. Konyukhov was curious to know how his compatriots, sailing in cockleshells for ships, three hundred years ago, managed to discover new islands, gulfs and bays and create new settlements. He undertook dog sled trips in Chukotka to test if a dog sled could be used to reach the North Pole, but later preferred skis. Everywhere he went in the North he was curious about how people survived the harsh conditions. He also created several paintings, which he later displayed in some of his personal exhibitions.

His assault on the North Pole was preceded by several other feats: a nighttime ski trip to a point at the Northern pole of relative inaccessibility (the spot farthest from any land, located in the Arctic Ocean pack ice) together with the arctic explorer Dmitry Shparo’s group; a trip across Baffin Island, Canada, with a Canadian expedition; a ski expedition following the USSR – Canada North Pole route under Dmitry Shparo; participation in the first autonomous North Pole expedition “Arktika” (“The Arctic”). Following his experience in arctic ski travel, in 1990 Konyukhov set out on a solo trip to the Pole. In spite of all the difficulties, 72 days later he reached the North Pole, fulfilling his dream and Georgy Sedov’s legacy. Once, he barely escaped death during ice hummocking, but this didn’t scare him off, and five years later he set out to conquer the Antarctic, again alone. For navigation in the extreme conditions of the frozen wasteland he used a “Navikom” portable space navigation system, oriented to a stationary satellite. It helped him to reach the exact geographic spot of the South Pole on the 59th day of his voyage, and for the first time, place a Russian flag there. This time Konyukhov alone worked as a whole expedition. At the request of the Russian Atomic Ministry, he measured natural radioactivity levels on his way to the Pole. At doctors’ request, he observed his own physical and psychological conditions under the simultaneous effect of high altitude (over 5 kilometers above sea level), low temperatures (reaching -60 Celsius) and strong wind (up to 30 m/sec). He also conducted research for the Arctic and Antarctic Research Institutions.

Specialists in Russia and the world consider Fyodor Konyukhov to be the most universal of all professional travelers. He has performed over 40 different expeditions, including mountain climbs. Lacking any special mountaineering training, armed only with great physical endurance and determination to reach his goal, he decided to honor Moscow’s 850th anniversary by climbing to the mountaintops of all of the world’s continents. It took him five years of hard work to accomplish the feat. As an exercise, he did a quick run up the Klyuchevskaya Sopka in Russia’s Kamchatka Peninsula, 4,750 meters high. His success made him believe in himself. After that came the Caucasian Elbrus (5,642 meters), the Asian Everest (8,848 meters), the Australian Mount Koscuiszko (2,230 meters) and the South American Cerro Aconcagua (6,960 meters). Certainly, Everest was the most difficult to climb, but three other mountains presented particular difficulties and interest. The long-extinct African volcano Kilimanjaro, 5,895 meters high, attracted the Russian traveler’s particular attention. Climbing up from the tropics, he experienced the gradual change of climate and weather. The mountain’s foot had only sun burnt plant life; at the height of 3-4 kilometers, the evergreen tropical forests began, followed by alpine meadows, then rocks and, finally, ice and snow. As an artist, Konyukhov stopped to admire the nature’s beauty, doing numerous sketches and photos. But the most difficult climbs were the icy rock mountains, the North American Mount McKinley (6,193 meters) and the Antarctic Vinson Massif (5,140 meters). After successfully climbing back down from the Massif, Fyodor nearly died of hunger and cold, as a blizzard prevented planes from picking him up.

Konykhov undertook most of his expeditions alone, but he also gladly participated in collective ones. He organized two trans-continental runs: a Soviet-American bicycle run from Nakhodka (in the far South-Eastern corner of Russia) to Leningrad (now St. Petersburg) in 1989 and a Soviet-Australian automobile run from Nakhodka to Brest (on the Belorussian-Polish border) in 1991. During the long trips across Russia Fyodor showed his foreign colleagues many of the country’s natural sights: the cedar forests, Lake Baikal, the grand rivers of Siberia, the Ural Mountains. Many documentaries, reports and photographic collections resulted from these trips in Russia and abroad.

Fyodor Konyukhov is the only Russian to make three solo cruises around the world. On the first one in 1990-1991 on the “Karaana” yacht, Konyukhov set out from the Australian port of Sidney and returned there 224 days later. He chose a difficult route between the latitudes of forty and fifty degrees, where the first Russian circumnavigators, Adam Johann von Krusenstern (Ivan Kruzenshtern), Mikhail Lazarev, et al., had sailed. A year later Fyodor Konyukhov started on his second round-the-world cruise, following an equatorial route: Taiwan – Singapore – the Indian Ocean – the Red and the Mediterranean Seas – Gibraltar – the Atlantic – the Hawaiian Islands – Taiwan, visiting all the continents. The solo cruise on the two-mast yacht “Formosa” lasted for 508 days and was full of both dramatic and heroic events. For example, near the Philippines, Konyukhov fell seriously ill and was hospitalized. Meanwhile, pirates stole his yacht and took it to another island. Konyukhov didn’t hesitate to hijack a motorboat from another pirate gang to find the “Formosa.” The drunken sea robbers he found on board the motorboat were tied up and loaded off to a lifeboat. 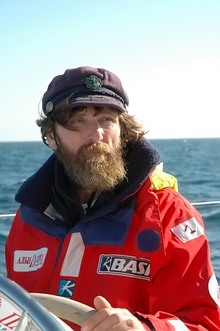 Later he took part in the international sea race “Around the World Alone” (“Vokrug sveta – v odinochku”), and made his third world cruise on the yacht named after Moscow’s Modern Humanitarian University. At first, there were 39 challengers from many countries subscribed in the competition, but only 16 reached the starting point, the rest dropped out for various reasons, including failure to pass the qualification race of 2,000 nautical miles. Fyodor Konyukhov passed the test, but later got caught in three hurricanes. For three days his yacht lay on one side, and the captain had to make tremendous efforts to stabilize it. The race encompassed all of the world’s oceans, and was 27 thousand nautical miles (50 thousand kilometers) long, and followed the route: the American Port Charlston – South African Capetown – New Zealand’s Auckland – Uruguay’s Punta-del-Este – Charlston. Konyukhov’s wife Irina and son Oscar arrived in all of the ports to support Fyodor and help him fix any breakdowns of his yacht. The yachtsmen spent a total of eight months at sea, from September 1998 to May 1999. Some of the ships had up to 15 breakdowns. Once, during the night, Konyukhov’s yacht ran into a sleeping whale, bending the steer as a result. While he was approaching Cape Horn, a dolphin jumped aboard his ship, a rare occurrence in sea navigation. Konyukhov barely managed to push the slippery creature back into the sea. Near the coast of Brazil, he managed to fight off pirates with only a signal flare gun.

Seven participants fell out of the race before it ended. Fyodor Konyukhov finished third. Upon arrival, he received a telegram from Moscow’s Mayor Yury Luzhkov, saying that he was “proud that such a legendary traveler lives in Moscow and upholds the traditions of Russians in exploring the planet.”

Right now Fyodor Konyukhov is on an expedition following the route of the Silk Road. It is to finish on 31 October 2009 in Elista, the capital of Russian Republic of Kalmykia.

Fyodor Konyukhov’s expeditions have contributed greatly to Russian science, sport and tourism. They show what a person, who is well prepared physically and morally, can accomplish, if he manages to maintain his health and strength in extreme conditions. To expand his knowledge, he graduated from the Modern Humanitarian University’s faculty of law and heads the laboratory of remote education in extreme conditions there. Konyukhov always draws and writes, even during his travels. He is a member of the Russian Artists Union and the Russian Journalists Union. His first three books were published in 1999. They are mainly travel journals, but read more like adventure novels.

The traveler has been awarded the Order of People’s Friendship and a UNESCO diploma for his input into the cause of preserving ecology. He is an honored master of sports and a yacht captain.

Aside of his main passion, traveling, Fyodor Konyukhov writes poetry and fiction and composes organ music.