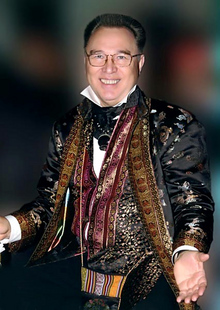 It is only now that the name of Slava Zaitsev has actually become synonymous with exquisite taste and high fashion in Russia. He was the first designer in the USSR to be allowed to put his label on clothing. In 1988 he was the first Soviet designer to show his collection at the Haute Couture Week in Paris. Yet, Zaitsev has not always been the “patriarch of Russian fashion”. He himself considers his path towards success to have been a rocky one.

Zaitsev was born in the small town of Ivanovo in Western Russia. His mother was a janitor and a laundry woman and his childhood was uneventful. At the age of 16 he entered the local technical school, specialising in textile design. He was a promising student and after passing his finals, he applied to the State Textiles University in Moscow. It was during his entry exams that Zaitsev changed his mind. He no longer wanted to design just the fabric, he wanted to design clothes.

Despite accepting him onto the course, the university did not provide Zaitsev with accommodation and the artist had to make do. According to the designer himself, his student years were the most rewarding, but also the

most difficult ones of his life. Instead of staying in halls of residence, Zaitsev worked as 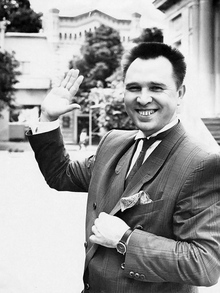 a live-in housekeeper in his acquaintances’ flat. For years he slept on the floor between the two children’s' beds. Yet, his university career was a success. He was at the forefront of student life, participating in theatre productions and Communist Party functions.

It was during his final year of university that Zaitsev met his wife, Masha. The marriage was difficult for Zaitsev, mostly due to the fact that his relationship with his mother-in-law was tense. She thought that the young fashion designer hadn't married her daughter, but her flat in Moscow. The marriage lasted for nine years, after which Zaitsev finally got divorced and was left on the streets once again. During the next ten years or so, Zaitsev moved from rented flat to rented flat.

His first glimpse of fame came in 1963, when he decided to “make his fellow countrymen more beautiful”. Zaitsev was one of the industrial designers at a factory which specialised in working clothes. His assignment was to create a new range of quilted jackets and, inspired by Russian folk art, Zaitsev made them in colourful chintz.

However, the designer's practical conceptualism wasn't understood by Soviet officials.

They thought that the final product was too festive and frivolous, making it “apolitical”. Zaitsev's idea, on the other hand, was to create working clothes which would be both practical and pleasant to wear, instead of being degrading. Despite being humiliated by his superiors, Zaitsev was praised by a number of international journalists.

Soon, drawings of his collections appeared in such famous publications as “Paris Match”, “Life” and “Look”. It was the first time in the history of fashion that a Soviet designer had been noticed abroad. Yet at home Zaitsev suffered from the hardships of a comrades' court: he lost his position as a 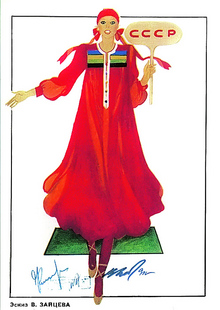 designer and nearly lost his sight as a result, so severe was his nervous breakdown.

He was allowed to work in a factory workshop which used leftover shreds of fabric to produce clothes which could be sold in budget shops around Moscow. It’s his success in this field which permitted him to gain a reputation as a designer of “experimental” clothing ranges and become the head of a designers' team at the Central Fashion House.

In 1965 the turning point of Zaitsev's career came together with visitors from abroad. News came that the French singer Gilbert Becaud was visiting Moscow, together with such famous fashion designers as Pierre Cardin. They were interested in meeting the young Russian wonder (as he’d become known in the French press). Zaitsev could not reject the proposal and by the afternoon the designers were sharing ideas and sketches in a restaurant in Moscow.

It was during this time also that Zaitsev spent long afternoons in Moscow's classical museums, meticulously drawing the costumes and patterns he saw in famous paintings. It is these colourful sketches that would eventually find 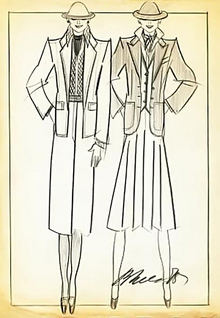 their way into Zaitsev's unique designer style, which mixes traditional patterns and styles with modern elegance and practicality. The designer himself notes that it was the 60s and 70s that formed him as an artist.

At this time, some, including his ex-university professors, still considered him a simpleton. He had a distinctive accent, dressed in colourful shirts that he made himself and was, according to them, too provincial and unrefined. However, his talent did eventually find undeniable acclaim abroad. In 1974 he was named as one of the five top designers of the 20th century according to the Czech magazine “Kveta”.

However, the harsh political climate was not becoming more favourable and by 1978 Zaitsev had become increasingly convinced that he should leave the fashion world. As he recalls on his official website: “only official fashion existed in the Soviet Union, everything that surpassed its framework simply did not exist.” The fact that his collections were popular, say, in the U.S. (as was the case with his 1969 designs) meant that he was increasingly under pressure at home. It was also his audacity which proved to be problematic. During an official function, Zaitsev once told a Communist Party official that he should dress better, considering his high-standing post. As a result

Zaitsev was forbidden to leave the USSR for several years. 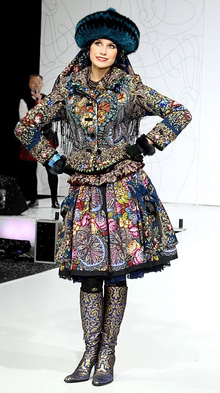 The only thing that saved Slava Zaitsev from completely forsaking the fashion world was the international media attention. It gave him strength to set up his own fashion house in 1982, which he presides over to this day. It was there that he created the outfits which became synonymous with good taste within Russian artistic circles.

Clothes are just a part of Zaitsev's impressive achievements. Among other things, Zaitsev has designed a range of furniture produced in Belgium, new Russian police uniforms in 1991 and a range of beauty products called “Marusya” that are now sold all over the world.

Few are aware of his work in painting. Nevertheless, some of his canvases are on display at the State Tretyakov Gallery in Moscow, as well as in places such as the Prado Museum in Madrid, the Modern Art Museum in Warsaw and numerous private collections. He has designed the costumes for some of the most successful performances in the most notable theatres of Moscow and St. Petersburg. Zaitsev is also the author of several poetry collections. He was also the first set up a young designers' contest in Russia in 1994.

Apart from his indefatigable drive towards creating new fashion collections, Zaitsev also currently hosts a popular TV programme on which he helps ordinary people find their style in clothing. He holds numerous official

awards, such as the highly prestigious the Honoured Artist order. He is also a member of the Writers’ Union of the Russian Federation as a result of his successful poetry and 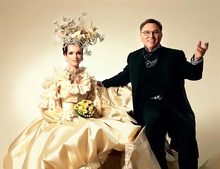 Russian folklore tradition has always been an inspiration to Zaistev's unique style. He expertly mixes classic shapes with traditional peasant costumes, surprising the public with his unconventional approach to fashion. He searches for harmony between form and content, trying to prove that a person can be not only an observer of the world's beauty, but a firm part of it. Despite suffering many hardships in Russia over the years, Zaitsev refuses the leave his homeland. He is convinced that Russia has an extremely rich culture, which can inspire fresh ideas in fashion.