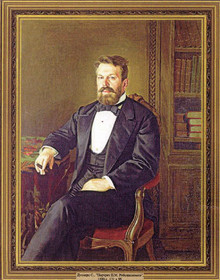 “Everything for the business and nothing for myself.” -  Mikhail Ryabushinsky

The Ryabushinskys were a family of wealthy Russian industrialists. Descended from peasants, they successfully invested in textiles, land and banking in the 19th and early 20th centuries. They were prominent in liberal politics prior to the Russian Revolution of 1917. The rise of the mighty clan of industrial magnates began in the second half of the 15th century. A hermit called Pafnuty founded a cloister not far from the old Russian town of Borovsk. Pilgrims would flock to the retreat and settle in the local villages of Vysotsky, Roshchinsky and Rebushinsky. In 1767 Empress Catherine the Great decreed that the cloister lands, complete with the peasants, be transferred over to the state. The Ryabushinsky family was descended from the peasants of the Rebushinsky community, the first in the dynasty being Mikhail Yakovlev.

At the age of 16 Mikhail set off for Moscow where he signed up for the Third Guild of Moscow merchants in 1802 under the name of Yakovlev. He had to put up between 1,000 and 5,000 rubles to join the guild and it is not clear where the 16-year-old peasant got that much money. He may have received it from his elder brother Artemy, who is said to have engaged in trade operations in Moscow. During the War of 1812 with Napoleon Moscow was burned down, and almost all the city’s merchants went bankrupt. Mikhail Yakovlev was one of those staunch enterprising traders, who survived and later succeeded. In 1820 the proper authorities permitted him to be named Rebushinsky, which he eventually changed to Ryabushinsky. In 1846 Ryabushinsky bought a small weaving mill in Moscow. Mikhail met and married Yefimia Skvortsova who was a daughter of a rich merchant, landlord and owner of a tannery. By 1823, he had a house right by the Moscow Kremlin. He had five children: two daughters and three sons. He later groomed his son, Pavel, as his successor.

The opening, in the mid-1840s, of two textile factories in the Kaluga province spelled the beginning of the Ryabushinsky Empire. Ryabushinsky was building his business. He maintained offices in five districts of the Kaluga Region. His people distributed yarn among local weavers who operated 3,000 looms. Fabrics were sold in Ryabushinsky's own shops. He built two mills in the provinces, equipped with 600 and 200 looms respectively, imported from Manchester. He reaped fabulous profits. His capital was an estimated two million rubles in 1858, the year of his death. 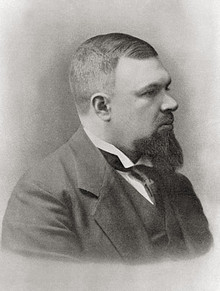 Mikhail’s son, Pavel, expanded the business after his father’s death. Pavel was 38 and had already spent 25 years working for the family when Mikhail Yakovlevich died. The business flourished. In 1864 the two brothers (Pavel and Vasily) purchased new premises having sold their father's old and small shops for 18,000 rubles. The brothers founded a partnership under the trade name of P. and V. Ryabushinsky in Moscow, which was duly registered with an official certificate. Pavel was a resourceful, easy-going and outspoken person, totally different from his younger brother Vasily. The eldest son, Ivan, was cut off with a penny for marrying against his father’s will. He opened a business of his own.

The three brothers were home-schooled and started running business errands as soon as they turned 14. They were introduced to the secrets of bookkeeping and toured together with their mother to places where they could sell and buy fabrics. Little by little, they accumulated experience and learned to use their own brains. The Ryabushinskys were devout believers of the Orthodox rite. Pavel’s children said there was a special room for prayer in their home, where old icons adorned the walls and where church books were kept. Sometimes formal church services were held in that room. They were frequently visited by nuns and monks.

Pavel Ryabushinsky became a successful businessman. He had a nose for business endeavors and a rare gift for defining the real worth of prospective business partners. He was cautious in his choice of business associates. 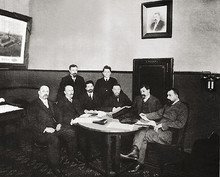 One day he made a crucial decision that left a lasting imprint on the family industries. Steam engine machinery came to replace the handlooms of the textile factories of Moscow in the 1850s and 1860s. Pavel had to either brace up for modernization or leave the stage. He knew that the technical overhaul of an old factory would cost him more than opening a new factory. In 1869 Pavel Ryabushinsky bought a cotton mill with 268 spindles for 268 thousand rubles. The enterprise was located by the station of Vyshny Volochyok mid-way between Moscow and St. Petersburg.

He got rid of his other mills and invested exclusively in his new business. A year had hardly gone by before he won the gold medal in a nationwide fair of woven fabrics. And, twelve years later, he won the right to brand his fabrics with the state emblem of the Russian Empire.

He kept expanding production. What used to be a cotton mill in the city of Tver, by 1887 had become a conglomerate of five factories that specialized in weaving, spinning, dyeing, bleaching and finishing. It could fairly be called a business corporation. Little by little, it became active in the banking sector.

And yet, the industrialist prevailed over the banker. By the end of the 19th century, his factories came to play an important role in the textile industry of Russia. A whole town grew up around the shops. A sawmill opened nearby in 1897, as the Ryabushinskys by then had more than 30,000 acres of forests. Electricity, then uncommon in the country, was delivered to the shops.

As for Ryabushinsky’s family life, Pavel was married under unusual circumstances. In 1870, he intended to arrange a date between his brother Vasily and the daughter of a rich merchant. But he liked the girl so much that she married him, instead of his brother. The girl Aleksandra was thirty years younger than Pavel, but they lived happily together and their union was blessed with many children. Pavel and Aleksandra had 16 children. Pavel Ryabushinsky died in 1899, leaving a fortune of 20 million rubles to his children. His sons inherited his business company. Before his death, the four elder sons of Pavel Mikhailovich would come to Vyshny Volochyok for “summertime practice.” Pavel was getting on in years and so wanted his sons to take over the business. Shortly before he died, he founded the Partnership of Manufactories of P.M. Ryabushinsky and Sons, under an ownership form, which in his view would be most conducive to the promotion of his business.

Four of his eight sons, having graduated from the Academy of Practical Sciences and completed advanced training courses abroad, worked actively in their father's business. One of the brothers, Vladimir, wrote that the ancestral mills were to them like ancestral castles to medieval knights. The three junior brothers later joined the elder ones. But the eighth son, Nikolay, resigned from the partnership.

By the time World War I began, the Ryabushinsky Empire had more than 4,500 employees. Its annual volume of production was put at eight million rubles. Its banking sector and industrial board were headquartered in a 1.5 million-ruble building erected in the art nouveau style by fashionable architect Fyodor Shekhtel, in the heart of Moscow. That building is a brick-and-stone business card of the turn-of-the-century industrialists. 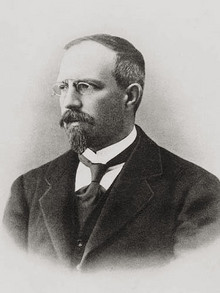 Pavel Pavlovich, the eldest of the third generation of Ryabushinskys, took over the firm. He met with severe trials that threatened total ruin. The textile mills were destroyed in a major fire in 1900. Then a year later the leading banker and industrialist Aleksey Alchevsky committed suicide. The Ryabushinskys had invested about four million rubles in his enterprise and banks. By the outbreak of World War I the Ryabushinsky enterprises had employed over 4.5 thousand and their annual output was valued at eight million rubles. The Ryabushinsky banking house had a capital of five million rubles. They also gained control of Russia's third largest mortgage bank, which they took over after Alchevsky's suicide. In 1912 the brothers converted it into a joint-stock bank, called the Moscow Commercial Bank, with a capital stock of 25 million rubles. It ranked thirteenth among Russia's leading banks.

In 1915, Pavel Junior was, in recognition of his leading role in business, elected to chair the metropolitan stock exchange committee. Soon after, he was elected to chair the Military-Industrial Committee of Russia. Meanwhile, economically, the country was rapidly going from bad to worse. In 1917 industrial production fell to less than two-thirds of the preceding years. The Ryabushinskys urged seizing the workers by the throat with “famine’s bony hand” and the capitalists were all for carrying out his recommendation: over 800 factories were shut down and some 170,000 workers were discharged between March and November 1917. The value of the ruble dropped to less than ten pre-war kopeks. In the autumn of 1917 workers’ families faced starvation, while the approaching winter threatened even greater hardships.

After the February Social-Democratic Revolution of 1917, Ryabushinsky opposed the Soviet and the participation of socialists in the Provisional Government. He withdrew from politics and went to the Crimea for a tuberculosis cure. After the October Revolution he immigrated to France, where he continued to hope he and his entrepreneurial class might eventually prove useful to his native country.