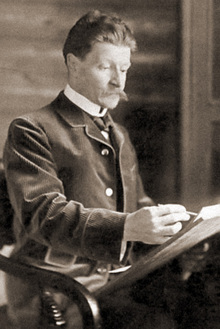 Appearing at the end of 19th century, the paintings of Mikhail Vrubel represent some of the most significant and mysterious phenomenon of Russian art. A talented and tragic artist, Vrubel managed to convey his complex and inaccessible inner life through the medium of his unusual works.

Mikhail Vrubel was born in Omsk, into the family of a military lawyer. Due to his father’s work in the army, the family had to move often. Mikhail studied in different cities such as Omsk, Astrakhan, St. Petersburg and Odessa.

Vrubel first began taking painting lessons in 1864, in Saratov. After completing his gymnasium studies in Odessa, he entered the Saint Petersburg University, specializing in law. At the same time he attended lessons at the Academy of Arts.

Following his graduation from the university, Vrubel served in the army and worked in the war shipping administration. But, his artistic nature could not bear a routine military job and Mikhail entered the Russian Academy of Arts. As a student, he was noticed for his unorthodox style and original interpretation of classical themes.

From 1884 to 1889 Vrubel worked in Kiev, having been invited by Professor Andrian Prakhov to restore about 150 elements of ancient frescoes and create new compositions for St. Cyril’s Church, built in the 12th century. Vrubel spent about 18 months in Venice, learning about the art of medieval painters and used this experience for creating four icons at St. Cyril’s Church. Vrubel used the image of Prakhov’s wife, Emilia, as a prototype for the Mother of God in one of these icons. 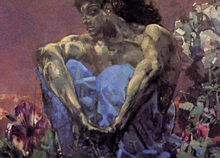 One of the most talked-of events in Vrubel’s career was his participation in creating paintings for St. Vladimir’s Cathedral. After the cathedral was built in 1882, Professor Prakhov was put in charge of its inner decorations. Prakhov gathered a team of painters, including Mikhail Vrubel. The artist spent a great deal of time making sketches for wall paintings, such as “Resurrection,” “Lamentation” and “Angel with Censer and Candle.” His sketches, however, were not approved by the executive commission, which stated that the works were made in an unusual, innovative manner and didn’t correspond to religious canons.

But Vrubel’s biographers say that the painter was also dismissed from the project because he was in love with Prakhov’s wife Emilia. The jealous professor didn’t want the artist to do any large works in the cathedral and replaced him with another famous painter, Viktor Vasnetsov. However, Vrubel wished to continue his work and asked Prakhov to at least let him do simple jobs. As a result, only a few ornaments made by Mikhail Vrubel can be found in the cathedral. 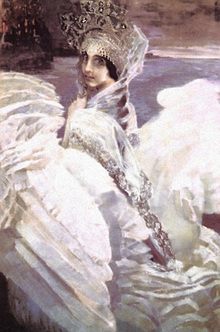 According to experts, if the artist had realized his initial sketches, the entire cathedral would look much different, with a much more mystic and cosmic character. Interestingly, Vrubel’s name was not even mentioned on the annotative board listing those who worked on the project.

Some biographers also mention the painter’s early symptoms of mental disorders among other reasons for his dismissal from the St. Vladimir’s Cathedral project. Over a period of time theses symptoms grew into a serious disease. Mikhail Vrubel distanced himself from Christ and gradually devoted his art to a different subject – the devil. The image of Satan later became the dominating theme of his numerous works.

While living in Kiev, Vrubel also created his secular works “Self-Portrait” (1882), “The Oriental Tale” (1886) and “Portrait of a Girl against a Persian Carpet” (1886) among others. These paintings showed the artist’s skill in working with bright colors and floral motifs.

Mikhail Vrubel created several decorations for Savva Mamontov’s theater (for instance, the curtain “Night in Italy”). In 1890 the artist began his work in ceramics and made a few sculptural works on subjects from Russian and Slavic mythology such as “Lel,” “Kupava,” and “Berendey.” Within two years Vrubel became the head of the ceramic workshop.

Savva Mamontov invited Vrubel to join him on a tour of Europe and the artist visited Rome, Florence, Venice, Milan and Paris. The journey inspired Vrubel to create bright and heart-warming paintings and watercolors, including “Spain,” “Fortune-teller” and “Venice.” 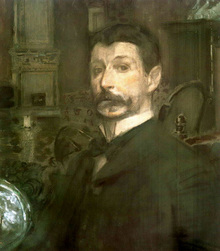 In 1896 Mikhail Vrubel fell in love with the opera singer Nadezhda Zabela, whom he soon married. Vrubel was captivated by his wife’s talent and beauty and she inspired him for a number of works. Nadezhda’s facial features can be recognized in the paintings “Hansel and Gretel” (1896), “Princess Volkhova” (1898) and “Swan Princess” (1900).

Vrubel was very skilful at using watercolor and applied this technique to a number of still-life works and portraits. The artist was also greatly interested in literature and drama, having made many graphic interpretations of works by Shakespeare, Lermontov and Pushkin. Evidently, the complex nature of the painter was attracted to the dramatic images of Hamlet, Ophelia, Mozart and Demon.

Mikhail Vrubel’s emotional state was always worrying; he suffered from mood swings, and was often irritable and overexcited. But in 1901 the artist’s mental health worsened and doctors concluded that his illness was not curable. Still, Vrubel kept working and in 1902 he finished his famous painting “Demon Downcast.” Mikhail Vrubel was absolutely obsessed with this work and even when the painting was already in an exhibition hall in Saint Petersburg, he kept changing the image of the demon daily, up to forty times a day.

The death of his young son in 1903 was a new blow for the artist and from that moment Mikhail Vrubel spent most of his time in mental clinics. Vrubel’s health, as reported, was ruined by tertiary syphilis. He gradually lost his eyesight and created his last work, a portrait of Valery Bryusov, when he was almost blind.

Mikhail Vrubel died in 1910 in a mental clinic, supposedly from tuberculosis. His biographers state that Vrubel deliberately caught a cold, staying outside in freezing weather, and his death was virtually a suicide.