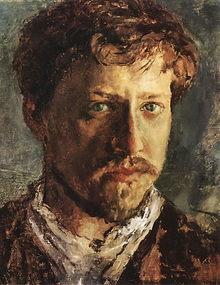 Valentin Serov was a Russian painter and one of the premier portrait artists of his era.

Valentin Serov was born in St. Petersburg into a family that belonged to the artistic community. Serov’s father, Alexander, was a composer of German-Jewish and English background. He was a well-known music critic and an inordinate admirer of Wagner. At the age of 43 he married Valentin’s mother, who was only 17 at the time. Valentin was the couple’s only child.

Serov’s childhood was steeped in artistic atmosphere: not only musicians, but also sculptors (such as Mark Antokolsky) and artists (like Ilya Repin and Ghe) were visitors to the Serov home. Young Valentin’s powers of observation and talent for drawing became apparent at an early age and the conditions in which he grew up were conducive to their development.

Valentin’s father died when the boy was six; his mother was so busy organizing parties and musicales she had no time to spare for her son, who felt abandoned. Still, when she saw how well the child drew, she decided to go to Paris, which was at the time the center of art and the place of residence of Repin, the artist she knew well (by that time Repin had already become popular). The renowned artist taught the boy painting; step by step the latter gained ground, but also became gloomy and introspective. 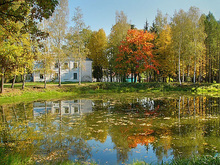 In 1875 the art patron Savva Mamontov invited Serov and his mother to settle in Abramtsevo outside Moscow, where Valentin again had a chance to study under Repin (who had returned to Russia) and to meet other artists in Mamontov's circle. The formation of Serov's artistic outlook was greatly affected by life at Abramtsevo and Domotkanovo, not far from Moscow. He came to love the central-Russian countryside with its groves and open spaces surrounded by woods, ravines, coppices and villages. Works completed at Domotkanovo included “October” (1895), “Yearlings at a Watering Place” (1904), “A Woman with a Horse” (1898) and many illustrations of Krylov's fables (Krylov was Russia's best known fabulist; while many of his earlier fables were loosely based on Aesop and Jean de La Fontaine, later fables were original works).

In 1880 Serov entered the Academy of Art in St. Petersburg, where he was taught by Pavel Chistyakov, a Russian painter and teacher of art, who in older times had taught Vrubel, Surikov, Polenov and Repin. Chistyakov was an inerrant authority for young Serov, even though he sometimes made him draw squares and triangles just to prove his students were incapable. But five years later Serov decided to terminate his studies because, as he said later, he “got bored.” 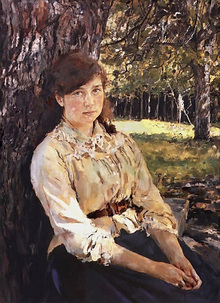 During the 1880s Serov traveled abroad and became aware of the French Impressionists. He began to use bright colors in portraits of figures seen in dappled sunlight and shade.

The works of Serov's early period were portraits: “The Girl with Peaches” (1887) and “The Girl in Sunlight” (1888) made him known, admired and famous. In these two noted paintings Serov concentrated on the spontaneity of perception of the model and nature. In the development of light and color, the harmony of reflections, the sense of atmospheric saturation and the fresh, picturesque perception of the world, there appeared the features of early Russian impressionism.

Serov received an award from the Moscow Society of Art Lovers and the second portrait was immediately bought by Pavel Tretyakov (a Russian businessman, patron of art, collector and philanthropist who gave his name to the Tretyakov Gallery in Moscow).

From 1890 on, the portrait became the basic genre in Serov's art. It was in this field that his early style became apparent; the paintings were notable for the psychologically pointed characteristics of his subjects. Serov often

preferred a dominant scale of black-grey or brown tones. 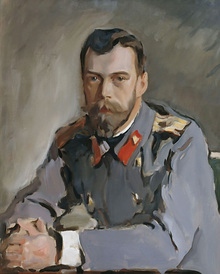 By the late 1890s Serov had gained a reputation as one the best Russian portrait painters of his time on a par with Repin, his teacher, painting portraits of artists, actors and aristocrats. His portrait of Konstantin Korovin (1891) shows the influence of Edgar Degas, whose works Serov could have known from his stay in Paris. Serov’s portraits were admired by everyone and the artist received an ever increasing number orders. In 1892, upon the recommendation of Repin, Serov received an order from the Kharkov nobility to paint a large portrait of Emperor Alexander III and his family. It took Serov nearly three years to finish the piece as he had to paint looking at the emperor’s photograph and only once had the chance to see the sovereign in person!

Historians recall another case when Serov made a portrait of a monarch – Nikolay II. The empress asked Nikolay to strike his usual pose and started to examine him and the portrait carefully as if picking holes in the picture. Here and there she noticed minor defects and immediately told the artist about them. The amazed artist listened silently to the criticism, but at a certain point he gave way to emotions and handed the palette to the empress saying it would be great if she made portraits herself. Nikolay II had to apologize for his spouse’s faux pas.

When working with nobility Serov insisted on ninety sittings – three months of hard work. His models had to sit still for hours and the slightest movement caused the artist’s discontent. Some of his subjects were even a little afraid to sit for portraits. Still, despite the strictness, there were always many anxious to have their portrait painted by Serov. He never failed his clients – they received beautiful and elegant portraits they could be rightly proud of; however, the artist was interested not solely in the person, but in their character, which showed through the sleek appearance and at times made the results not too complementary.

Having gained wide popularity, in 1894 Serov joined the Peredvizhniki (The Itinerants) and took on important commissions, among them portraits of Grand Duke Pavel Alexandrovich (1897), Botkin (a famous Russian clinician, therapist, activist and one of the founders of modern Russian medical science and education), (1899) and Yusupova (a Russian noblewoman), (1903). The Peredvizhniki were a group of Russian realist artists who, in protest of academic restrictions, formed an artists' cooperative that evolved into the Society for Traveling Art Exhibitions. The society was formed in 1870 in Saint Petersburg under Ivan Kramskoy, Grigory Myasoedov, Nikolay Ghe and Vasily Perov’s initiatives during a struggle of the avant-garde art forces of the country for democratic ideals in an effort to counter the official center of art—the Saint Petersburg Academy of Arts.

From 1897 to 1909 Serov taught at the Moscow School of Painting, Sculpture and Architecture. His pupils were Pavel Kuznetsov, Martiros Saroyan and Konstantin Yuon. 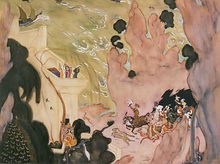 Although a resident of Moscow, around 1900 he moved to St. Petersburg to participate in the World of Art Group (an influential Russian art association and magazine which grew, in part, out of dissatisfaction with the Itinerants movement). Like Korovin, Serov contributed both to the journal and to the exhibitions organized by the group. Under their influence he began to create historical paintings, such as “Peter II and Empress Elizaveta Petrovna Riding to Hounds” (1900), a scene from the eighteenth century.

Serov's democratic beliefs were clearly shown during the Revolution of 1905-1907; he depicted a number of satirical figures exposing chastisers. A full member of the Saint Petersburg Academy of Arts since 1903, in 1905 he resigned in a gesture of protest against the execution of striking workers and their families on 9 January (also known as Bloody Sunday).

In 1907 Serov, accompanied by Leon Bakst (a Russian painter and scene and costume designer who revolutionized the arts he worked in) traveled to Greece, to Crete, where the two artists studied the ruins of the Knoss Castle. After returning home Serov began making sketches of the ancient castle and themes from classical mythology. "The Abduction of Europa" painted in 1910 is one of his best known paintings of the period. 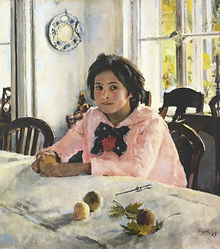 Serov’s best works are among the greatest of Russian realistic art. In 1911, for Sergey Diaghilev's “Scheherazade,” Serov designed a famous drop curtain depicting the departure of the Sultan for the hunt.

Valentin Serov died in Moscow on 5 December 1911. He is buried at the Novodevichy Cemetery.

In 1887 Serov married Olga Trubnikova and their family was large and happy. Serov loved children and enjoyed painting them. The picture-portrait “Children” (1899), which shows his sons Yury and Sasha, the drawing “The Botkin Sisters” (1900) and the portrait of “Micky Morozov” (1901) are all noteworthy for their lyrical qualities and sensitive understanding of the children's characters.

In his youth Serov was a natural comedian and loved to entertain his guests simulating different animals – his “lion” or “toy rabbit” were so funny the public hooted with laughter, though the actor remained unabashed. In Abramtsevo Serov participated in Mamontov’s home plays and performances, making guests laugh and enjoy themselves.

Apart from entertaining his friends and guests, Serov loved arts and crafts, especially ceramics. The ceramic dish that one may notice on Serov’s “The Girl with Peaches” was hand-made by the artist himself! In the nineties Serov even set up a pottery.