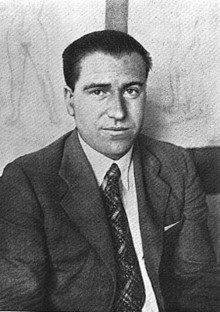 Aleksandr Aleksandrovich Deyneka was a Soviet artist and sculptor and the founder of Social Realism. His monumental works shaped the face of Moscow in the 1930s-1950s – he decorated the Mayakovskaya and Novokuznetskaya metro stations, the Moscow University and the State Kremlin Palace.

Deyneka was born in Kursk into the family of a railroad depot worker. Following the family tradition he entered the Kursk railroad college, but at the same time attended classes at a small art studio. His teachers recognized his talent and urged him to keep up with art so in 1915 Deyneka went to the Ukrainian city of Kharkov to study art. Here he painted antique masks, statues and models. According to Deyneka, the school lacked a systematic approach to education and students were left to explore different styles on their own. At the time they were particularly taken by  “isms” – impressionism, symbolism, cubism and futurism.

Following the 1917 October Revolution the school was closed and the students were sent home. Deyneka went back to Kursk where he helped support his family. He taught art at a women’s gymnasium, then worked as a photographer at the local Criminal Investigation Department. In 1919 Deyneka was called to serve in the Red Army where his artistic skills were put to use drawing posters for propaganda activities in towns and villages. Soon he was appointed head of his unit’s Art Department, in charge of organizing the production of posters.

He was such a success that after demobilization he was sent to perfect his skills in Soviet propaganda at the Moscow Higher Art and Technical Studios (VKhUTEMAS). He studied under V. Favosrky, a famous old school artist, whose students made up the carcass of 20th century art. 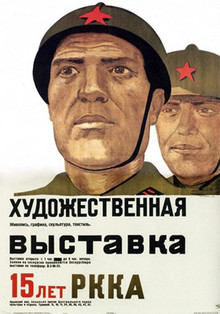 In 1924 Deyneka finished his education and went to work for various Soviet magazines, traveling extensively throughout the country. The sketches he made during his trips provided a wealth of material for his future works. That same year, along with a few other artists, he organized the artistic society OST. Its main goal was to create a new style in art, so-called Social Realism - art for the masses available in public places. The novelty of the new style was that it addressed themes that had never been used in art before – sports, aviation, factories, public transportation, mines, Soviet collective farming – everything that worked and moved and was symbolic of the new era. The new style demanded new techniques and here the young artists preferred graphic clarity to strict composition. They were greatly influenced by the masters of German expressionism.

Deyneka’s twenties coincided with the youth of the Soviet Union. People were taken with the utopian idea of building a new country. The young Bolsheviks were full of enthusiasm, and so was Deyneka. He was a tall, strong young man with huge hands – he looked more like a miner than an artist. Perhaps this is why factory workers were so willing to pose for him – they took him for one of their own.

Deyneka’s style is typical of the totalitarian states of his time. Benito Mussolini thought him one of the best artists of his day and called him “a true Roman.” Despite Deyneka’s enthusiasm for new life, his pictures were perhaps more idealistic than realistic. They had the look of real life, but they did not show the kind of life that went on behind the scenes - the true hardships of the country, torn by poverty, famine, instability, and later the massive repressions. His Social Realism rather portrayed the “ideal existence” and “radiant future” propagated by Communist ideology. 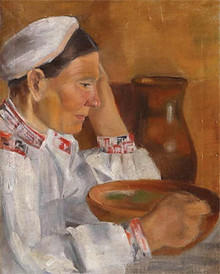 In the 30s Deyneka moved his focus from collective themes to the beauty of the individual. One of his best works of this period is “Mother.”

A 1933 review of Deyneka’s picture stated: “In this picture we can observe the lyrical image of a mother holding a child. But what a mother this is! This is not a petit bourgeois bitch, portrayed by the artists of capitalist countries. This is not the mother, who is simply an addition to a husband master, a husband provider or a husband tyrant. This is a strong image of an energetic, self-motivated, free woman. She helps us understand how biology can be mixed with high social awareness.” It may sound somewhat over the top today, but this kind of socialist pathos dominated the era and made it hard for a real artist to express himself outside the frame imposed by the Communist party.

His pictures during this period were dominated by strong young women; the ideal Soviet woman who could do anything – work at a factory, bear children and, if necessary, pick up a gun and fight at war.

The presence of women in his pictures drew a number of questions regarding his personal life. Paintings like “On the Balcony,” depicting a nude young girl raised curiosity regarding his relationship with his models, but Deyneka always kept his private life secret.

He did draw his first wife, who was his muse as the ideal of the socialist woman, but never gave away her identity signing only the initials S. I. L. for Seraphima Ivanovna Lycheva. But he never drew his second wife, who was 22 years his junior, despite all his requests for her to pose for his paintings.

In 1935 Deyneka was sent on a business trip abroad – to Italy, France and the US. The main goal of his trip was to study the monumental works of foreign artists and to visit museums. He drew many sketches on his trip, never taking pictures with a photo camera; according to him, sketches preserved the emotion of sight better than photos. Deyneka always carried a sketchbook with him that was custom designed to fit the size of his pocket. His trip resulted in a series of works about life in Italy, France and the US.

Shaping the face of Moscow – metro masterpieces and more

Deyneka became one of the artists who shaped the face of Moscow in the 1930s-1950s, when the Soviet Union launched the grand construction of public buildings and the Metro. It was a feast for Deyneka, who had been trying his hand in mosaics and frescos. He was appointed to decorate the Moscow University and the Mayakovskaya metro station, which had 34 mosaic pictures installed in the plafonds. Deyneka tried to create an illusion of sky perspective with his pictures showing “24 hours of the Soviet Sky.”

The architectural design of the Mayakovskaya metro station won the Grand Prix at the World Exhibition in New York in 1939. The mosaics were rebuilt actual size and displayed in an installation called the Metro Room. Later he created mosaic plafonds for the Paveletskaya and Novokuznetskaya stations. Deyneka’s works also decorate the Moscow State University, the State Kremlin Palace, the Moscow Exhibition Center, the Theater of the Soviet Army and a resort façade in Sochi. 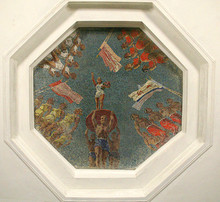 The WW2 period had a great impact on Deyneka’s work – he traveled to the front and witnessed firsthand the terrible scenes of war. His pictures,“The Shot-Down Ace” and “The Outskirts of Moscow” are straight and honest and full of tragedy. Deyneka’s most dramatic and perhaps most famous work, “The Battle of Sevastopol,” was also created during this period.

Persecution for formalism and latter years

In the 1950s and 1960s Deyneka was as active as during his youth. Besides painting, he took up sculpture and also started teaching at the Moscow Art Institute. However, in comparison to the 1920s and 1930s, the athletes and barefoot children, the full-breasted beauties and the strong factory workers no longer exuded as much life energy. It seems the force that had motivated Deyneka had lost its power. Some blame it on Deyneka getting old and tired of life. While others claim that perhaps the utopia that everyone was overtaken with in the 1920s didn’t come to materialize in the 60s and Deyneka was disappointed.

Another factor that weighed heavily on Deyneka was the persecution for formalism during Joseph Stalin’s rule. In the USSR formalism was a sort of ideological cliché and in 1930s-1950s it was conveniently used against artists, musicians and whole movements, which were not deemed loyal enough to the Soviet party. Deyneka was fired from the Moscow Art Institute, where he had taught for nearly a decade.

Nevertheless, he was still in great favor and the fact that he didn’t get arrested or exiled like many of his colleagues and contemporaries and was allowed to work was proof of that fact. After Stalin’s death he remained popular with the Kremlin authorities and was even awarded the Order of Lenin. In 1962 Deyneka was appointed Vice-President of the USSR Academy of Arts.

Throughout his life Deyneka was a highly respected and beloved professor at the country’s most prestigious institutions - the High Art Institute, the Institute of Applied and Decorative Arts and the Architectural Institute. He was also awarded the Red Banner of Labor and title of Hero of Socialist Labor – the highest awards in the USSR.

In 1969 the Academy held Deyneka’s personal exhibition, which opened several days before his death at the age of 70. He is buried at the Novodevichy Cemetery in Moscow.