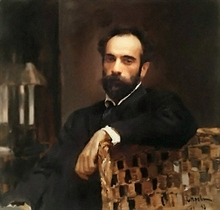 Isaac Ilyich Levitan was a famous Russian painter, a master of landscape painting and founder of the “mood landscape” genre.

Levitan was born in a nameless village near the border town of Verzhbolovo (now Virbalis, Lithuania) into an educated, intellectual but poor Jewish family. His father, who was a language teacher tried not only to make ends meet for his family but also to educate his children, and Levitan received basic education at home. At the end of the 1870s his family moved to Moscow. There, in spite of an even worse financial situation, Levitan’s parents were loyal to their children’s passion to art, which they showed early on, and didn’t oppose Isaac’s decision to become an artist and attend the Moscow College of Art, Sculpture and Architecture. In 1875 Isaac’s mother died, and two years later, typhus took his father.

Levitan spent his youth in dire need and poverty. He was soon expelled from the college for failing to pay for his studies, but his friends gathered the necessary money, and he was able to return to his lessons. Later, the college’s teachers’ council decided to let him study for free and even granted him a small stipend for showing great success in art. The same year he transferred to a natural science class under Vasily Perov. Perov, one of the founders of the Society of Traveling Art Exhibitions (a society of Russian realist artists formed in 1870), was an outstanding artist and teacher. Later, Levitan was taken into apprenticeship by the famous landscape artist Aleksey Savrasov, who took notice of Levitan’s talents and tried to provide some monetary aid to him. In 1877, the fifth traveling art exhibition arrived in Moscow and was displayed in the college building. The exhibition featured two of Levitan’s paintings: “Evening” (“Vecher”) and “A Sunny Day. Spring” (“Solnechnyi den. Vesna”). Despite the fact that they received high acclaim, the College Council refused to give him a medal and only offered a diploma that gave him the right to teach art.

In December 1879 a second students’ exhibition opened, where Levitan displayed his painting “A Day in Autumn. Sokolniki” (“Osenniy den. Sokolniki”). The work was purchased by Pavel Tretyakov, the founder of the Tretyakov Gallery. For the first time, Levitan’s talent was officially acknowledged.

In the summers of 1880-1884 he depicted the nature of Moscow’s Ostankino Region. Later, he drew backgrounds for operas to earn his way to the Crimea. Only in the mid 1880s did his financial situation improve, thanks to his hard work and sacrifice. However, a starving childhood and a stressful life took their toll on his health in the form of a degenerative heart disease. A trip to the Crimea managed to improve Levitan’s condition. Upon returning, he organized a personal exhibition of 60 landscape paintings.

In 1887 Levitan fulfilled his dream and traveled to the banks of the Volga River. The beautiful nature inspired him to paint more varying landscapes. The “Volga period” lasted until 1890. During this time he created many beautiful and varied paintings, showing his vision of different conditions of nature. In March 1891 Levitan became a member of the Society of Traveling Art Exhibitions, and by the end of the year, displayed ten of his paintings at a Moscow Society of Art Lovers exhibition. He received wide acclaim from both fellow artists and the public. Levitan went abroad to test himself by visiting art galleries to see how artists worked in Europe. He went to France, Italy, Germany and Switzerland, but, being a true patriot, he could not stand prolonged periods far from home. 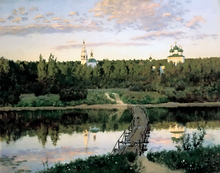 Levitan created his “grand painting” in the town of Plyos in the Ivanovo Region, on the banks of the Volga. The work was named “The Quiet Haven” (“Tikhaya Obitel”). His contemporaries claimed the painting showed Russian nature as “something new yet very close and dear.” Since then, every Traveling Exhibition, every exhibition of the Moscow Art Lovers Society and every International Exhibition in Munich featured works by Levitan.

In September 1892 Levitan had to leave Moscow when Emperor Alexander III ordered the expulsion of all Jews. Levitan’s friends in Moscow and St. Petersburg protested, demanding his return, and finally, authorities had to let him back into the city, as he was not only famous in Russia, but also abroad. Starting from 1898 Levitan taught landscape painting at the Moscow College of Art, Sculpture and Architecture, showing great pedagogic capabilities. The 28th Traveling Art Exhibition featured works by two of his students, who were later accepted by the Society’s older generation members.

However, of all his contemporaries, Levitan closest ties were to the famous writer Anton Chekhov, both in work and in friendship. They met at the end of the 1870s when both were poor students. They kept in contact during the1880s, constantly meeting in Moscow and the Moscow Region. They became very close in 1885, and remained best friends until Levitan’s last days. Their friendship was based on a similar perception of nature and the world as a whole. They also shared views on religion, showing equal respect to all denominations.

In March 1894 Levitan moved to the Tver Region, and later to Gorki, starting the final stages of his work. 1895 was a very difficult year for the artist. Heart illness sapped his strength with shots of pain and choking; melancholy and troublesin his private life led him to despair and suicide attempts. But his love of nature and art sustained him and helped him overcome his illness and make new discoveries in art.

In 1898 Levitan was given the title of academic of landscape painting. He still taught in the College of Art, Sculpture and Architecture. His paintings were on display at Russia-wide exhibitions, at International exhibitions in Munich and the World Exhibition in Paris. He became internationally famous. But his health started failing, his heart disease progressing quickly. Treatment abroad only helped for a short time.

Levitan first wanted to name his last painting “Rus,” synthesizing the pursuits of his life in a single work. The painting, which was finally named “The Lake” (“Ozero”) shows a collective image of Russian nature and the artist’s last thoughts and feelings - those of Russia, his Motherland. Levitan, the author of over a thousand paintings, died on 22 June 1900.