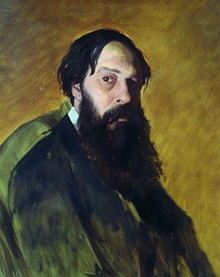 Aleksey Savrasov was one of Russia’s most remarkable landscape painters and the originator of the so-called “mood landscape.”

Savrasov was born on 12 May 1830 into the family of a Moscow merchant. He began to draw early; when the future artist was only 12 he started painting gouache and watercolor landscapes that were gladly bought up by street vendors for chicken feed. In 1844, though his father was against it (he dreamed that his son would one day become a merchant, but his hopes were not destined to be realized), small Aleksey enrolled in the Moscow School of Painting and Sculpture and immediately began to specialize in landscape painting. Despite his apparent talent, the boy was regularly sent to the attic to work – so strong were his father’s protests against his son’s hobby. So only several weeks after the enrollment Savrasov, afraid of his father and worried by his mother’s illness, quit his studies only to resume them four years later thanks to his professors and philanthropists who noticed the talented boy and decided to help him.

In 1848 Savrasov studied under the renowned landscapist Rabus and was considered the best student in landscape painting at the school.

A year later, in 1849, Savrasov was sent to Odessa in Ukraine where he painted landscapes of the local nature (the voyage was paid for by the well-known art patron Likhachev, who was a member of the Moscow Art Society). These works were distinguished in the school and the young artist received an appreciation certificate. In 1850 Savrasov graduated from the educational institution and received the official title of unclassed artist.

The first independent works by Savrasov resemble those he painted when still at school and were greatly influenced by the predominant painting style of the time – romanticism.

By the invitation of the Grand Duchess Maria Nikolayevna, the President of the Russian Academy of Arts, who commissioned several works from Savrasov, in summer 1854 he moved to the shores of the Gulf of Finland in the neighborhood of St. Petersburg. Though the scenery there was alien to his spirit, he was able to find some innovations never before seen in academic landscape painting. Several months later two of the pictures painted at the gulf coast attracted mass attention during an exhibition at the Academy (these two were “View in the Neighborhood of Oranienbaum” and “Seashore in the Neighborhood of Oranienbaum”). The paintings earned Savrasov the title of Fellow of the Academy.

After the promising exhibition in Saint Petersburg, in 1855 Savrasov moved back to Moscow where he took part in exhibitions held by the School of Painting and Sculpture. In 1857 after his beloved professor Rabus died, Savrasov took over as master of the landscape class. Savrasov loved teaching and his colleagues and students returned his affection. His best disciples, Isaac Levitan and Konstantin Korovin (both promising young men would later become well-known in Russia and abroad) always remembered their teacher with admiration and gratefulness. 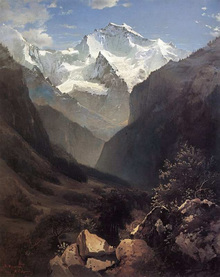 In 1862, at the suggestion of the Art Amateurs’ Society, Savrasov went abroad. He traveled to England, Switzerland, Copenhagen, Berlin, Dresden, Leipzig and Paris and visited Munich to see the International Exhibition being held there. In one of his letters he wrote, “no academies in the world could so advance an artist as the present world exhibition.” The artists who influenced him most were British painter John Constable and Swiss painter Alexandre Calame. Savrasov’s introduction to English landscape painting was most influential. His best paintings of the period include “View of the Swiss Alps from Interlaken” (1862), “Rustic View” (1867) and “Rafts” (1868).

In the sixties the most significant work by Savrasov was considered “Elk Island” (1869) – this painting earned the artist the first prize at the contest organized by the Moscow Art Amateurs’ Society.

In the time of reforms Savrasov became one of the few pivotal figures of cultural life in Moscow. In the sixties Savrasov’s friends and acquaintances gathered in the cozy and welcoming home of the renowned artist and talked and argued about art, discussed music, read literary novelties and debated contemporary social issues affecting both Moscow and rest of the world.

In 1869 Savrasov helped publish a textbook on drawing. The artist made sure it included a detailed description of how to paint cottages, villages and typical Russian landscape.

In 1870 Savrasov also became a member of the Peredvizhniki group, a group of Russian realist artists who, in protest of academic restrictions, formed an artists' cooperative, which evolved into the Society for Traveling Art Exhibitions in 1870, breaking with government-sponsored academic art. In December of the same year Savrasov and his wife went to Yaroslavl (and later moved to Nizhny Novgorod), not far from the Volga River. The artist was charmed by the magnificence of the nature and spent much time working. He always enjoyed working outside, often in the suburbs of Moscow; but from 1870 Savrasov started making frequent trips to the upcountry.

The Rooks Have Come Back 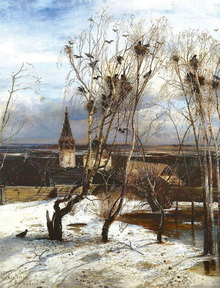 “The Rooks Have Come Back,” painted in 1871 is considered by many critics to be the high point in Savrasov’s artistic career. Using a common, even trivial episode of birds returning home in spring and an extremely simple landscape, Savrasov emotionally showed the transition of nature from winter to spring. It was a new type of the so-called “lyrical landscape” painting, which critics later called the “mood landscape.” Kramskoy (a Russian painter and art critic who was the intellectual leader of the Russian democratic art movement in 1860–1880) once wrote that the landscape in “The Rooks Have Come Back” was the best he’d ever seen; and despite the fact that there were similar landscapes painted by other renowned Russian artists, only “The Rooks” mirrored the artist’s soul. Levitan considered the painting to be “very simple, but beneath the simplicity there is the tender artist’s soul, who loves nature and values it.”

The painting brought him true fame and contributed to the success of the first exhibition organized by the Peredvizhniki. After the overwhelming success Savrasov continued to work side by side with the group and helped mount exhibitions, often hanging his own works.

In the sixties Savrasov became especially close with Vasily Perov (a Russian painter and one of the founding members of the Peredvizhniki). Perov helped him paint the figures of the boat trackers in Savrasov’s “Volga near Yuryevets” while Savrasov painted landscape paintings for Perov’s “Bird Catcher and Hunters on Bivouac.”

In 1871 Savrasov suffered the greatest tragedy of his life – in February his daughter died. It was a terrible blow for the artist who became gloomy and withdrawn.

In autumn 1871, the artist spent much time outdoors in order to forget himself and his tragedy. It was during this time that Savrasov painted his greatest painting – “The Rooks Have Come Back.”

In the late seventies Savrasov’s art experienced a certain decline: his works were hung more and more rarely and his eyesight started to fail. Art critics started to treat him less and less cordially, and one of them, Vladimir Stasov, even said that in the famous “Rooks Have Come Back” he saw nothing but winter, cold and dull radiance.

Savrasov, unable to withstand such hardships, became an alcoholic. All attempts by his relatives and friends to help him were in vain. In 1882 Savrasov was fired from the School of Painting and Sculpture and lost his state-provided apartment. In 1894 friends of the artist helped publish an album of Savrasov’s drawings. The album served as a kind of an illustration that Savrasov was and remained a peerless master.

Savrasov spent the last years of his life as a pauper, wandering from shelter to shelter. Thievish picture dealers took advantage of the great artist's tight situation and bought up his works for next to nothing, selling them, in turn, for a much larger sum - the sum they were really worth. The artist was systematically excluded from all the artistic circles and communities that once used to boast being acquainted with Savrasov. Despite his poor eyesight, which worsened with time, Savrasov continued to paint, although the quality of his work had declined.

Savrasov died on 26 September 1897 in a city hospital, in a ward for paupers. Only the doorkeeper of the Moscow School of Painting, Sculpture and Architecture and Pavel Tretyakov, founder of the Tretyakov Gallery, were present at his funeral in 1897.

In 1857 Savrasov married Sophia Hertz, the sister of art historian K. Hertz; the couple had several children. In their home they entertained artists and collectors including the famous Pavel Tretyakov.

In 1870 Savrasov’s daughter was born, but the baby died just a few days later (it was the third baby to die in the family of the renowned artist) and his wife became seriously ill. It was a real blow to Savrasov who became an alcoholic; his wife took their children and left. She did not even attend her husband’s funeral.

In 1890 Savrasov moved in with Evdokiya Morgunova, a commoner. They had two children; their son Aleksey would later become a reasonably good vanguard artist.

His elder daughter Vera sometimes recalled her father refused to teach her painting and sculpture, as he was sure that all artists live only to starve to death one day.