Born to be an artist

Aleksandr Benua was born into the family of a celebrated architect and since his childhood revered art. He did not receive academic artistic training, though, opting instead to study law at St. Petersburg University (1890-1894). At the same time he studied art history by himself and took lessons in drawing and painting. 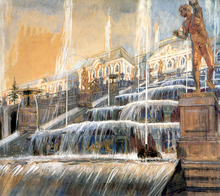 He was a frequent visitor to Italy and France, where he copied the old masters, studied the writings of the French socialist utopian thinker Henri de Saint-Simon and European literature of the 17th, 18th and 19th centuries. He also took an interest in old etchings.

The hard work bore fruit: Benua wrote a chapter about Russian art for the third volume of History of Painting in the 19th Century by German art historian Richard Mutter published in 1894. He immediately became the talk of the town in artistic circles and gained a reputation as the man who turned the established views on the development of Russian art upside down.

In 1897 Benua produced his first serious artistic work. Based on his impressions from a trip to France, he created a series of water colours under the title Last promenades of Louis XIV in a distinctive, immediately recognisable style. He polished his technique in another series of water colours and gouache lyrical paintings featuring the parks and gardens of Versailles.

In the late 1890s he organised the artistic movement Mir Iskusstva (World of Art). Benua was a prolific graphic artist and book designer. His illustrations of Aleksandr Pushkin’s Queen of Spades and The Bronze Horseman and The ABC in pictures by Alexader Benua have entered history books.

In the 1910s he worked as a stage designer for the Russian Seasons – or Ballets Russes – a legendary ballet company organised by Russian impresario Sergey Diagilev. It aimed not only to bring Russian culture to Europe but was also a creative workshop uniting the best dancers, choreographers and painters. One of Benua’s best works as a stage designer was the colourful sets for Igor Stravinsky’s ballet Petrushka, which perfectly rendered the spirit of Russian folk culture. 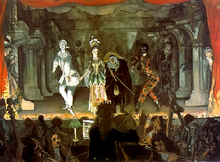 Apart from the Russian Seasons, Benua created sets for Wagner’s opera Twilight of the Gods for the Mariinsky Theatre.

He was also a successful art historian. In 1901-1902 he released a two-volume study, “Russian Painting in the 19th Century,” which developed from his early work. In 1910 Benua launched several series of artistic editions. Russian School of Painting and The History of Painting of All Times and Peoples, were stopped in 1917 because of the revolution.

After the Bolshevik revolution

After the revolution of 1917 Benua dedicated himself to the preservation of cultural heritage and in 1918 he was appointed head of the Hermitage art gallery. At this post, he devised and implemented a new concept for the museum’s permanent exhibition. 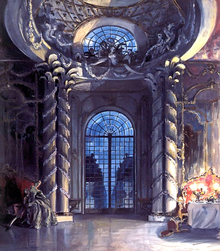 In 1926 the artist moved abroad. He settled in Paris, where he worked for the Grand Opera and after WW2 for Milan’s La Scala. Benua’s style did not change much during this time; he preferred to create variations of his early works.

From 1934 he wrote his memoirs, in which he vividly describes his childhood and youth and the atmosphere of creative and intellectual search characteristic of Russia at the turn of the century, the so-called ‘silver age’ of Russian culture.

Aleksandr Benua died in 1960 in Paris. Through all his life he remained faithful to the high ideals of art which rely on a solid classical background. A great connoisseur of world culture, he, dedicated himself to one task: promoting Russian art.

The largest collections of Benua’s works are kept in Moscow’s Tretyakov Gallery and the Russian Museum in St. Petersburg.