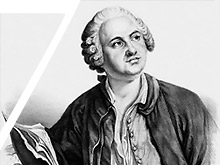 On June 7, 1761, during a transit of the planet Venus, Russian astronomer Mikhail Lomonosov discovered that the black disk of Venus, while moving into the sun, actually grew a beautiful halo of light all around its dark edge. Being a genius scientist, Lomonosov figured out that this is exactly what you would expect to see if Venus had an atmosphere.

The planet Venus is the closest to Earth, and is considered the most beautiful planet in the solar system. No wonder it was named after the Roman goddess of love. It has been captivating scientists, astronomers and mathematicians for hundreds of years, but the rare celestial phenomenon when Venus passes over the solar disk was first documented by British scientists in 1639.

From a young man with a thirst for knowledge, to the first Russian professor of chemistry, Lomonosov was not only a man of science but also a poet and a writer who created the bases of Russian literary language and founded Moscow State University. Aleksandr Pushkin described him most admirably: “Lomonosov was a great man. During the interval between Peter I and Catherine II, he was the only indigenous champion of the Enlightenment. He built our first university. One may rightly say that he was our first university.”

Lomonosov studied theories of light and heat, electricity and gravitation, meteorology and geography to name only a few fields of his work and discoveries. But his research interests often took the most unusual directions as he became very involved in the art of mosaics. He set up a glass factory, which produced the first stained glass mosaics outside of Italy. Among the best surviving to this present day is the portrait of Peter the Great and the Battle of Poltava.

All his life, Lomonosov worked to the limit. He studied hard, spending days, not hours, reading books. His niece gave an account of the last few years of his life: “Sometimes he would be so occupied with reading and writing that he would not drink or eat anything, except for March beer and bread with butter, for an entire week… On other occasions, he was so lost in his thoughts that during lunch he would often place the spoon he was eating his soup with behind his ear instead of his writing feather by force of habit, which he had since he was a student.”

Just like other scientists all over the world, Lomonosov was observing, on this day in 1761, the transit of Venus between the Earth and the Sun. Many astronomers had prepared for this event and organized expeditions to different corners of the globe, because only then could they measure the distance from the Sun to the Earth in order to determine the actual size of the solar system. But only Lomonosov, at his home in St. Petersburg, looking through a small telescope, made this great discovery of Venus’s atmosphere - much denser and hotter than that of Earth.

The next time Venus crosses the Sun can be seen in June 2012, where it will be visible from places like Hawaii, Australia and North America.