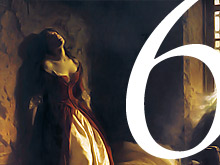 On June 6, 1775, a mysterious impostor, calling herself Princess Tarakanova, was imprisoned in the Peter and Paul Fortress in St. Petersburg.

This was following an order of Catherine the Great, as the young woman claimed to be Empress Elizabeth’s daughter and an heir to the Russian throne.

Rumors about the Princess’ possible existence were substantiated by the common knowledge that Empress Elizabeth had a love child with her favorite, Prince Razumovsky. The real Princess, named Augusta Tarakanova, never in pursuit of the Russian throne, was sent away to Italy as a little child, where she received an education and stayed until she was forcefully brought back on the order of Catherine the Great.

Augusta was confined to a convent, where she was kept under surveillance and in total solitude, with even church services held only for her. Only after Empress Catherine’s death was she allowed visitors, and received members of the clergy and Russian nobility.

The person who figured in history as Princess Tarakanova was nothing but an impostor and a daring adventure-seeker. A woman of murky past and arguable origins, she possessed great beauty and cunning, to bend many of her wealthy and noble admirers to her will and live at their expense, sometimes leading them to bankruptcy and prison.

Escaping from her creditors, she traveled across Europe, styling herself as Fräulein Frank or Madame Trémouille. In Paris, in 1772, she set about the greatest fraud of her life, as she claimed to be the Russian Princess Elizaveta Vladimirskaya, the direct heir to the Russian throne. A daughter of Empress Elizabeth, she asserted to have been raised in Persia and had come to Europe to reclaim her Russian throne and her Russian heritage. Once again, supported by her many admirers, she moved to Italy, where she stayed for two years, simultaneously holding an extensive publicity campaign positioning herself as the Russian heiress.

Catherine the Great, already threatened by the massive uprising of Emelyan Pugachev - the Ural Cossack who also had claims for the Russian throne - in 1773-1775, she ordered Prince Aleksey Orlov to seduce and retrieve the fake Tarakanova from Italy. The operation went well, and the impostor was imprisoned in the Peter and Paul Fortress in June of 1775. Very proud and ambitious, she refused to admit her fraud and never revealed her true descent. She died of tuberculosis in December of the same year, and was buried without any funeral rites.

Her romantic image was laced with many legends, later featured in books and films. However, neither her drowning in the Fortress during one of St. Petersburg’s floods – a story that inspired Konstantin Flavitsky’s famous painting - nor her passionate romance with Prince Orlov ever existed.