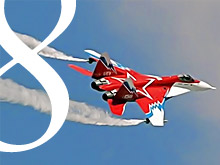 Anatoly Kvochur, the test pilot performing the demonstration flight, miraculously bailed himself out, clear of the collapsing plane. The pilot landed a mere 98ft from the wreckage, and the ejection seat came to ground right next to him.

The accident occurred when the roaring MiG-29, piloted by the Russian ace, swept across the field and was about to conclude the fulcrum of his aerobatic display. As the stunned spectators were gazing at the incredible performance in open-mouthed wonder, the starboard engine of the jet suddenly surged, belching a sheet of flames. The stricken fighter immediately rolled to starboard, the nose "falling through", until the aircraft entered a vertical dive. The fighter jet hit the ground beside the runway erupting into a fireball.

Kvochur ejected at 302ft, literally 2 seconds before the explosion, having directed the aircraft to a tiny clear spot on the ground and making sure that it would not hit the spectators.

Examination of the wreckage and the FDR analysis revealed that the starboard engine had been critically damaged by multiple bird-strikes.

When a French firefighter came running to the pilot, asking him is he was okay, Anatoly responded, “I am fine,” though barely able to talk and in pain, and added, grief-stricken, “I should have saved the aircraft…”

Kvochur was rushed to hospital, but was released the same day with nothing but bruises and a cut above his right eyebrow from the oxygen mask.

When later asked if he could have died, Anatoly Kvochur said, “I could have… I got lucky. At a low altitude, one of my engines died. What could I do? I ejected, knowing I didn’t have enough space. When the MiG-29 crashed and exploded, the explosive blast decelerated my fall. It saved my life. For a long time I’ve been wondering if I could actually have saved the aircraft, since the second engine kept working. When I simulated this case back in Russia, I saw it was only possible at a higher altitude, whereas I was only 92 meters (300ft).”

There was some comic relief to the situation, in that, after the accident, not only did Russian aircraft engineering manage to preserve its reputation, but it also made quite an advertisement for the ejection seat’s design, which proved to be very effective and subsequently surged in demand.