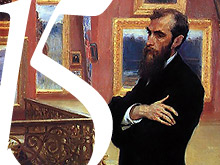 On August 15, 1893, the legendary Tretyakov Gallery was opened to the public. Bearing the name of its creator and spiritual patron, merchant Pavel Tretyakov, the gallery only houses masterpieces by Russian artists and, through their works, reflects over ten centuries of Russian fine arts in the making.

The gallery was started in 1856, when a 25-year-old Tretyakov acquired his first works by contemporary artists, aiming at ultimately creating a collection of national fine arts, “For me, a true and fervent adherent of fine arts, there is no other pleasure than starting an exhibition of fine arts, accessible to the public, bringing good to many, and pleasure to all.”

The Tretyakov Gallery owes most of its uniqueness to the personality of its creator, Pavel Tretyakov, who was a true phenomenon of a fine arts gatherer. His contemporaries were amazed at how a hereditary merchant such as him could possess such discriminating taste and a good eye for picking out promising and talented pieces. Ivan Kramskoy, one of the outstanding artists of the day, remarked that Tretyakov “was a man with a devilish instinct.” Tretyakov received no formal education, but still had a vast knowledge on many subjects.

Many artists admitted Tretyakov was impossible to influence or bribe into buying their pieces. All the more, Tretyakov’s taste and rigid requirements earned him respect and trust no other collector had, which benefited his collection significantly: he was entitled to be the first one to see new works while still in the artists’ workshops, or at the exhibitions before they were open to the public.

No matter how renowned and famous the artists were, they waited for Tretyakov’s assessment with great agitation, and were only relieved upon hearing his, “Please count this piece on me.” Very often, artists were willing to give Tretyakov discounts, as they realized that the sheer honor of their works being in the Tretyakov collection was almost priceless.

“Without him, the Russian fine arts would have never gotten on the free and open road, as Tretyakov was the only one who supported everything new, fresh, and positive in Russian art,” Aleksandr Benua, an artist and literary critic, remarked.

Another advantage of Tretyakov’s collection was its objectivity. In picking out works for his collection, Tretyakov only acquired those he thought had a future, regardless of what the critics and censors were saying, or even if he wasn’t very passionate about the painting, but saw its potential as a part of his collection. Tretyakov’s creed was not only to satisfy his personal artistic preferences, but also to reflect the objective timeline of the development of Russian arts. Therefore, every decade brought new styles and techniques into his collection.

In 1892 Tretyakov donated his collection to Moscow.

Over 1.5 million people visit the Tretyakov gallery annually, and the gallery itself has become one of the largest museums of the world over the past 100 years. Originally, the collection combined 1,287 paintings, 518 drawings, and 9 sculptures, while to the present day it has grown up to 100,000 items.

It was closed for reconstruction in 1986 to be reopened in 1995, enlarged and remodeled.

In the course of its age-old history it has survived many disasters: during the October Revolution, the paintings had to be rescued from mildew that grew from the constant absence of light and heat; in the years of World War II, the most priceless pieces were evacuated to the Urals, and had to be packed and ready for transportation in two days.

According to a Presidential decree, the gallery was included in the list of the state’s most valuable cultural objects.