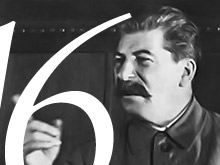 At the onset of the Great Patriotic War between Germany and the Soviet Union, Joseph Stalin issued the infamous Order Number 207 on August 16, 1941. The order condemned those who surrendered to the enemy and, regardless of the circumstances, those soldiers and commanders were treated as traitors and enemies of the people.

“We have no prisoners of war, only traitors of the motherland!” Stalin declared, giving the main idea behind Order No. 270. It was issued several months after Hitler’s army had entered the territory of the Soviet Union. Poorly-armed Soviet forces were suffering defeat after defeat against the superior army of the enemy. Stalin’s aim was to put the blame on someone for the losses and quickly dispel undesirable doubt as to his power and the victory of the Red Army.

First to bear the blame in Stalin’s order were the awarded Red Army commanders, Generals Nikolay Kirillov and Pavel Ponedelin, who had been taken prisoner by the Germans earlier that month. The Nazi’s used the fact of the war prisoners as propaganda. Both generals were photographed next to German officers and leaflets with those photos were scattered over the positions of Red Army troops.

Of course, there were those soldiers who displayed cowardice and had surrendered immediately, and others who had deserted and allied themselves with the enemy. But the plague of Order No. 270 was that it doomed anyone who was captured by the enemy, without any specific proof, investigation or consideration of circumstances.

Under Stalin’s order, Soviet soldiers were to fight to the death, and those who were captured had either to escape or commit suicide. Those who didn’t have the inner strength to do so deserved a single verdict – execution. Families of commanders who were taken prisoners were subject to arrest and those of general soldiers were deprived of any state allowance and assistance.

According to Stalin, both Ponedelin and Kirillov were “fully capable of fighting their way back to their troops, but instead gave way to panic, turned into cowards and deserted to the enemy.” They were sentenced in absentia to execution by shooting. Ponedelin’s wife and father were sentenced to five years in camps as relatives of a traitor.

Ponedelin and Kirillov remained in a fascist prison camp until the end of war. When they returned to their motherland, both were sent to Lefortovo prison in Moscow and executed for treason in 1950. It was noted that, just before the execution took place, Ponedelin said “I’m dying with peace, because after all it is my native Russian soil that will take in my ashes.”

After Stalin’s death, cases of former prisoners of war were reviewed by a special committee who launched an investigation. In 1956, Nikolay Kirillov and Pavel Ponedelin were rehabilitated, but sadly too late to have any effect on their tragic fate, and that of thousands of other brave soldiers who had fallen victim to Order No. 270.