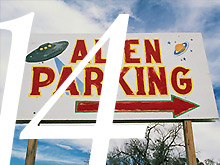 A previously unheard-of report flashed in the Soviet press in the end of 1950s: on August 14, 1957, extraterrestrial life was sighted on the outskirts of Stalinabad (now Dushanbe), Tajikistan. Witnesses to the mysterious incident were members of an archeological group working in the area.

As if by someone’s order, the event was never mention again on the pages of newspapers. The only other reference of this occurrence appeared in the science fiction section of the famous Soviet magazine “Tekhnika Molodezhi” (Technology for Youth) in 1958.

A short essay called “From Beyond” written by Arkady and Boris Strugatsky told the fascinating story of three archeologists, as well as several local witnesses, describing how strange black helicopters (evidently non-earthly) had abducted three cars, several cows, a small herd of sheep and several haystacks. They also encountered spider-like creatures stealing a primus stove, a can of food, a box of color pencils, an archeological diary and all their excavations, to take on board their “spaceship”.

This is how one of the archeologists described his first meeting with an unearthly creature “…He was standing motionless in front of the tent, matt-black, with the height of a large dog, resembling a giant spider. He had a round, flat body and articulated legs. A few seconds later he moved and started walking directly towards me. About ten steps, not more, separated us. I was dumbfounded, watching him slowly moving his legs leaving perforated footprints in the dust. Take into account that I had no idea that it was an alien. To me it was some sort of an unknown creature, and it was approaching me, strangely twisting its legs, mute and eyeless…”

Incidentally, on the night of 14th August, radio communication in Central Asia stopped working for several hours for no apparent reason. It is later in the story that one of the archeologists finds the diary of another professor, Boris Stronsky, who had apparently also made contact with the aliens and had even infiltrated his way into their spaceship hoping to discover more about the creatures, being fascinated, as a scientist would be. Stronsky had supposedly made contact with earth via a radio while on board with the aliens. He communicated that these visitors from space expressed a desire to meet other human beings, and offered a meeting place in any point of the orbit. The authors further imply that the USSR hurried their first space mission exactly for that reason.

The essay “From Beyond” became the first collaborated work of the two Strugatsky brothers. The short essay was eventually extended by the authors into a story under the same name and included in a collection of science fiction works.