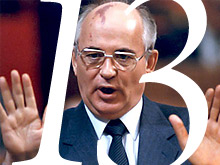 On August 13, 1990, the then-President of the USSR Mikhail Gorbachev issued a decree on the total restoration of rights of all political prisoners, repressed from the 1920-1950s.

This campaign of rehabilitation of the repression victims dates back to the sensational 20th Congress of the Communist Party, when the renowned Soviet leader, Nikita Khrushchev, made his famous speech denouncing Stalin and his cult of personality. It was the first time that the Soviet authorities had openly spoken about taking responsibility for the mass executions during Stalin’s purges. Khrushchev proclaimed: “Recently, the Central Committee, especially after Beria’s gang was exposed, has considered a number of cases cooked by this [Beria’s] clique. At the same time, an unsightly image of the chaos caused by Stalin’s wrongdoing was revealed. Facts show Stalin, taking advantage of his unlimited power, performed heinous acts on behalf of the Central Committee, without asking the opinion of its members or receiving their approval, thus making personal decisions on state issues of prime importance.”

Logically enough, this condemnation of Stalin’s activities was doomed to be biased. Khrushchev, himself a lever in the in the purge mechanism under Stalin, could not make objective assessments. When denouncing the repression policy, Khrushchev laid all blame on Stalin and the cult of personality, trying to whitewash himself and his associates, as most of them were in power at the time and couldn’t be compromised.

Under Khrushchev, the repressions stayed on, though now performed more discreetly and not so dreaded. The focus was shifted mostly to the political aspect, and occasional protests even took place, which in the Stalinist times was unthinkable. Many social-political circles spawned at the time, mostly voting against totalitarianism and, though having no radical political agendas, were still closely inspected by the authorities.

The Glasnost policy, introduced by Mikhail Gorbachev, though confined to certain limits, made a massive information breakthrough possible. It shifted the center of political life from being strictly focused around the Communist Party body to the public opinion and mass media, opening the floor for open discussions. Added to it, access was granted to a number of declassified documents which could shed light on the purges. It provoked much talk as to what the political repressions actually were and what purpose they served. Totally condemned by the authorities and public opinion in the early 1990s, when people were overwhelmed by the never-before-experienced freedom of speech, later, Stalin’s policy was revised and considered a very multifaceted and controversial phenomenon. It even gained advocates for itself and still remains a very complicated issue causing fierce discussions as to whether the repressions were an act of mere violence or cruel necessity, though the tragedy of it is hard to deny and the number of the repression victims speak for themselves, There are also arguments as to who was actually rehabilitated through this decree, since many claim that, for now, it appears very difficult to detect who was an innocent victim and who had a real criminal record.

In the course of the purges, about 20 million people are said to have gone through the GULAG, other 6 million were deported to specialized settlements and about 6 million died of starvation and poor living conditions.

As a follow-up to Gorbachev’s decree, the Supreme Soviet in 1991 declared October 30 a day for the remembrance of all innocent repression victims of the totalitarian regime. Boris Yeltsin, the first Russian President, carried on the rehabilitation policy by issuing a decree providing return of the confiscated property to the repression victims or compensation for it.