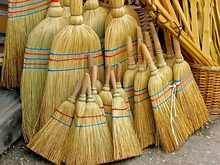 A broom and massage maker in one

Venik is a broom made of a bunch of dried tiny branches tied together and used to sweep the floors. Depending on the kind of branches a venik can be used to give a sort of a massage in the Russian banya .

The most popular plant for the production of the veniks is sorghum. Just take the branches (usually 20 to 50 cm long), dry them and then tie them together. Then turn them upside down with the soft and tiny weeds at the bottom - and your venik is ready to use. Venik was a traditional item in every izba – the wooden houses of Russian peasants.

For sweeping the outdoors venik was tied to a wooden pole, usually one meter long, which made it look like a broomstick. It spared one from getting a backache when cleaning streets. Usually the good veniks were saved strictly for indoor use, while any venik would do for “outside household operations”.

Venik was also used as a fighting tool. When a quarrel broke out in a Russian family, one of the parties could pick up a venik to prove a point. But more often it was used to spank children or bring pets to order, cats being the ones who suffered the most. Also, this kind of venik was used as a sort of a totem – to guard your home from all sorts of evil spirits.

Venik is still a popular tool for sweeping. Even the advent of the vacuum-cleaner did not eradicate the Russian habit of cleaning the kitchen with venik. The smaller the city, the more likely you are to see a real venik (as opposed to brooms made from artificial fibres) as a key household tool. 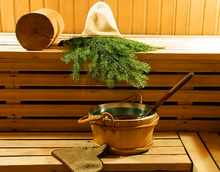 There is a story about an American who once came to the Russian banya . He was horrified to see Russian men in the steaming room beating each other with veniks. He hastily closed the door and asked with his eyes turned to the ceiling: “Do I really want this?” “Yes” – answered the hospitable Russians.

They took him into the steaming room and worked his body with veniks for about three minutes. After that they made him jump into a pool of cold water. The American was pleasantly amazed: “You know, in some ways it is even better than sex,” he said.

As you have understood by now veniks are used to pump up the heat to give your body a good massage. It is considered very healthy, and despite the fears of many foreigners it has nothing to do with sex. However, some argue that the benefits and pleasure one gets from being beaten by a venik is just as good, if not better.

For bath and body

Experienced banya goers use venik as the second part of their bath procedure. First, they go into the steaming room to open all the pores of their body and cleanse themselves from toxins. Afterwards they take a shower.

During this time veniks are soaked in a little tub of water (you don’t have to soak them if you use venik made of fresh braches). Then, after a short rest, men go back into the steaming room and start the beating.

It is recommended to keep a horizontal position in the steaming room during the venik massage. This way the hot air will distribute evenly through your body. When you stand, access heat to the upper part of your body can cause heart problems.

When you massage somebody with venik, try to hit them smoothly along the spine, legs and chest. Pros recommend making circular movements before the strike – this concentrates the heat around the body, which enhances the effect of the massage.

Please note that to avoid skin burns, one must not hit hard with a venik, especially if the temperature is over 90 degrees Centigrade. 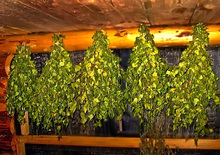 Venik massage boosts blood circulation in the body. Moreover, it produces a substance that kills harmful bacteria. After the steaming room with venik there’s nothing better than dipping oneself in a cold-water pool. The difference of temepratures will give you an immediate blood rush and will keep you in high spirits for a long time afterwards.

Note: For most benefit from the process of Russian banya and venik, it is advisable to have a medical checkup first, otherwise the whole procedure may bring more harm than good.

Birch venik. The dried birch leaves are good for a massage after a workout. They also make wounds heal faster and are an exceptional remedy for those who suffer from bronchitis.

Oak venik. Good for blood pressure. Recommended for those whose skin tends to sweat more often than usual.

Eucalyptus venik. Popular in the south of Russia. A good treatment for those suffering from a runny nose and sore throat.

The best time to “harvest” veniks is at the beginning of June – on the Trinity Day – 49 days after Easter. But if it rains you may do it one week later. You cut the branches, dry the leaves, and flatten them out a little bit while you tie the branches together. Good venik should look more like a fan than a sweeping tool.