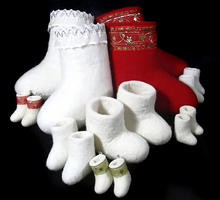 
Valenki are traditional Russian winter footwear. Made of sheep's wool, these warm felt boots have been worn by generations of Russians. For centuries they shod the feet of peasants and tsars. Valenki literally means, “made by felting”.

Valenki are not water-resistant, therefore they are often worn with a strip of leather on their sole or rubber galoshes to protect the felt. Galoshes also protect the valenki's soles from wear and tear.


Russian valenki date back to the 18th century when the first pair was produced. It is supposed that the prototype of valenki were the felt boots of Asian nomads, which they had been wearing for more than 1,500 years. Mass production of valenki started in the end of the 19th century when factories were opened. Before that valenki were too expensive and only well-off people could afford to possess a pair of them. 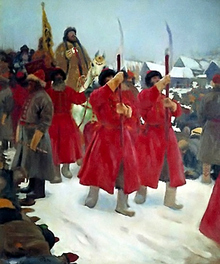 In the 20th century, an improvement in technology allowed manufacturers to vulcanize rubber overshoe-style protection right onto valenki to provide better water and piercing protection while retaining the advantages of the felt. Valenki are 100% natural, and environmentally friendly, but a little difficult to walk in. Traditional valenki are black, grey or white.

The manufacturing of the Valenki themselves hasn't changed for the last 200 years. The Valenki-maker puts a piece of combed wool on the table, and with additional strands on top he starts to create a template. He doesn't cut it out, or use scissors, needles or thread, just strand over strand. Handmade valenki are reputed to be of the highest quality.

Valenki were the footwear of choice for many Russians, especially for those in rural areas and those who couldn't afford to buy good leather boots. In valenki, the Russian army stood its ground to victory over Hitler's forces. But nowadays Valenki are still part of the winter uniform in some parts of Russia.

Valenki in the 20th century

Since the second half of the 20th century, valenki have lost most of their appeal in cities, due to their association with rustic style of dress and milder winters of the last years. 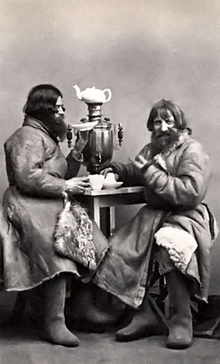 However, for some valenki are still the warmest and the most comfortable winter footwear. Valenki should be several sizes bigger so that you could feel comfortable even having woolen socks on.

Valenki are said to have healing effects, through their warmth and natural material. The Russian Tsar Peter the Great wore them to get over hangovers and urged his subjects to do the same.

However this Russian classic is not part of the country's history yet - about 4 and a half millions of Valenki pairs are produced annually in Russia. And traditional footwear is making a comeback in the world of fashion. Elegant modern design has helped Valenki to find their place in the wardrobe of present-day sharp dressers.


When you go somewhere in Valenki, you get noticed. Valenki are finding their place in the high life. Even fashionistas seem unwilling to give this woolen piece of history the boot. In many Russian towns, like Myshkin valenki are an important craft worth of display in a museum.


Few young ladies know that a valenok (sg from valenki) can also help to find a husband. The boot is used for fortune-telling. On the Christmas eve Russian girls of the past went out on the street and threw a valenok up in the skies. As the boot lands, the position of its leg shows in which direction a girl should be seeking a husband. This tradition is still popular with some and considered to be one of the most effective methods of finding a boyfriend or even a husband.


The word valenok has one more meaning. If somebody calls you a valenok, don't be flattered. Despite all the wonderful qualities of this boot in Russia, valenok means unsophisticated, dumb person, as the foorwear itself seems to be very simple and coarse compared to more elegant shoes.