Of Russian origin: The Era of Palace Coups 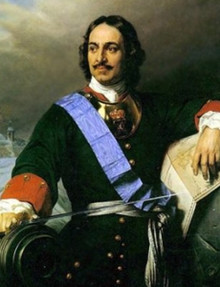 A period of Russian history between the reign of Peter the Great (May 7, 1682 – February 8, 1725) and Catherine the Great (July 9, 1762 - November 17, 1796) defined by rulers overthrowing each other from the throne with the help of elite palace guard. It is said to be one of the most difficult periods for the Russian throne.

After coming back from his trip around Europe (The Grand Embassy 1697-1698), Peter the Great implemented a number of sweeping reforms in Russia. One of them was changing the order of succession to the throne. The time-honored order of primogeniture was dropped by Peter's regulation in 1722. From that moment on, a monarch could choose a successor out of his children. The reform was an unheard-of novelty and immediately proved scandalous. Aside from that, it gave rise to a series of palace coups which lasted until Catherine the Great.

After the death of his first-born Aleksey Romanov who, by the old order, was to succeed Peter the Great on the throne, none of the options of the new replacement for the ruler of Russian Empire seemed acceptable. Peter struggled to make a decision, but died before he did, never having to put the innovation he introduced to the test.

The first palace revolution put Peter the Great's second wife Catherine I on the throne. With the help of Aleksandr Menshikov, leader of the palace guards, she gained the throne, becoming the first woman to rule Imperial Russia. However, due to her poor health, Menshikov did most of the ruling. She died two years after gaining the throne. Interestingly, However after her almost entire century Russia was mainly ruled by women. 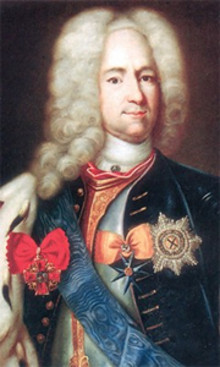 Ekaterina appointed Peter II, grandson of Peter the Great, her successor. He was only 11 when he became a ruler in 1727 and stayed on the throne only for 3 years with Menshikov behind him as a regent. Menshikov fell ill and died shortly, and Andrey Osterman and Aleksey Dolgoruky (Menshikov’s rivals at court) replaced him. Peter II died young, without naming a successor.

Anna Ioannovna was the niece of Peter the Great, the daughter of his brother, Ivan V. She was invited to rule the Russian Empire upon Peter II's death, by the Supreme Secret Council – a group of influential court aristocracy. They deemed her a puppet monarch, while the power remained in the Council's hands. However, with the support of the loyal nobility, Anna soon gained full power and dismissed the Council, installing herself on the Russian throne for the next decade, known in the Russian history as “bironovshchina” after the name of Anna's favorite Biron.

Anna named The Duke of Brunswick, Ivan VI, as her successor and Biron as his regent.  However, Biron was soon replaced as the ruler’s regent.  The regime did not last.

Gathering support for the revolution was rather easy for Elizaveta, being Peter the Great’s only remaining daughter. “You know whose daughter I am, so be loyal to me as you were to my father!” she would say. She received support of the Preobrazhensky regiment and with no resistance seized power, putting those in the way in prisons, including the young Ivan and his regent. She chose Peter the III, grandson of Peter the Great to be her successor. 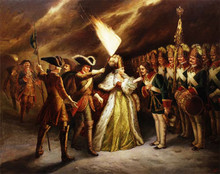 Oath of the Preobrazhensky regiment to Empress Elizabeth. F. Moskovitin.

One of the most peaceful and bloodless palace revolutions in history was the deposition of Peter III, son of Elizaveta Petrovna, a pro-Prussian and a very unpopular Emperor who only stayed on the throne for 6 months. He was overthrown by his own wife, then Empress-to-be Catherine the Great; she justified her act by claiming Peter was guilty of not respecting the Russian relics.

Peter's crucial mistake was still adhering to the Prussian order, especially in the military, while Russia was basically at war with the country, the fact of which greatly annoyed the army in particular. The army's support was the major reason for Catherine's success in the coup. When Peter III found out his throne was taken, he attempted to talk to Catherine but was met by the army. He had nothing left to do but to sign his resignation from the throne and leave.

This many coups in less than a century, and a great dislike of his mother Catherine made Emperor Paul finally cancel it in 1797. That, however, didn't save Paul from being overthrown from the throne, either. He was murdered in his own bedroom.