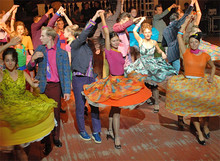 Screen shot from the movie "Stilyagi"

But outside influences are beginning to slip through the cracks. Through the mediums of fashion and music, the rock-n-roll phenomenon began to take root in the guise of ’s stilyagi or “hipsters”.

Against the grey backdrop of a cold war USSR, these daredevil teenagers sported daring, modern haircuts and makeup with brightly colored Western ties, jackets and pompadour trousers. An underground movement, they listened to the subversive, forbidden strains of American jazz and rock.

When Bill Haley’s “Rock Around The Clock” hit airwaves around the world in 1954, teenagers everywhere began change, not only in the way they dressed and the type of music they listened to, but also in attitude.

Screen shot from the movie "Stilyagi"

Like London’s “teddy boys”, Moscow’s hipsters defied social convention and the oppressive monotony of their everyday lives. But the drama of their unique historical context makes the stilyagi a uniquely fascinating cultural phenomenon. Unlike their contemporaries in Europe and the US, these youngsters risked not only the wrath of their parents, but the risk of arrest with the Russian police systematically organizing round-ups.

But for them it was worth it, for the stilyagi believed fervently in freedom of expression; not only for themselves but for all those around them and they resented the control with which the Soviet government ruled all aspects of their public and private lives.

In 2008, their mark was forever immortalized in the history books when acclaimed director Valery Todorovski dedicated his hugely popular 2008 film to its namesake, “Stilyagi”. It’s a nostalgic, feel-good romp of a musical. But the movie sets out to prove that rock-n-roll is not only about music – it is about a lifestyle and the need of all young people the world over to imprint their own personality on the way they live.