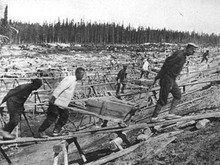 Stalin's purges could otherwise be translated as "Stalin's Terror". They grew from his paranoia and his desire to be absolute autocrat, and were enforced via the NKVD (Communist Secret police) and public 'show trials'. They helped develop a centrally-enforced 'cult of Stalin-worship', and a terrifying system of labor camps - the gulag.

Several reasons could be named for Joseph Stalin's terror. First of all, he believed that the country had to be united - with him as leader - if it was to be strong. Secondly, Stalin calculated that the Soviet Union only had 10 years to catch up with the Western world in terms of industrial growth before Germany invaded, which was highly plausible. The Soviet heavy industry was weak and in the decline, obviously lacking the capacity to produce enough metal and heavy machinery for the imminent war. So, “tightening the screws” and exploiting thousands of gulag prisoners at construction sites and at plants became a part of his sinister industrialization scheme.

In addition to that, the leader became increasingly paranoid (seeing plots everywhere) and power-mad (he demanded continuous praise and applause). And, above all, in 1935, his wife killed herself.

Stalin's "Apparatus of Terror" relied mostly on the NKVD. Stalin's first purges date back to 1930–33 and were aimed at extermination of those who opposed industrialization and the kulaks (well-off farmers and entrepreneurs, who opposed collectivization). 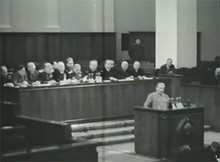 The worst nation to suffer from Stalin's purges in the Soviet Union were not the Russians - this is historians' main argument against equating Stalinism and Hitler's fascism. Hitler's machine of extermination had been targeted at non-Germans. Fascists sought to rejuvenate their nation based on commitment to the national community as an organic entity in which individuals are bound together by suprapersonal connections of ancestry, culture, and blood. However, although Stalin did enforce "russification" of the Soviet Union, his main enemies were his political opponents and their followers.

His most ferocious acts of terror - The Great Purges - took place between 1934 and 1939.
In 1934 Sergey Kirov, a rival to Stalin, was murdered. Although Stalin is believed to have been behind the assassination, he used it as a pretext to arrest thousands of his opponents, who, in his words, might have been responsible for Kirov's murder. The years after saw Stalin’s political opponents put on ‘show trials’, where they pleaded guilty to impossible charges of treason (e.g. Zinovyev and Kamenev in 1936, Bukharin, Tomsky and Rykov in 1938).

In 1937, the Commander-in-Chief of the Red Army and 7 leading generals were shot. In 1938–39, all the admirals and half the Army’s officers were executed or imprisoned. In the same period of time thousands of religious leaders were imprisoned while churches were closed.

The purges affected not only those who openly opposed Stalin, but ordinary people too. During Stalin's rule of the country over 20 million people were sent to labor camps, where nearly half of them died. 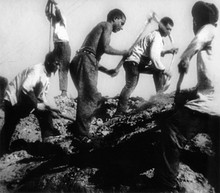 The cult of Stalin replaced churches with its icons. Censorship of anything that might reflect badly on Stalin was enacted. Propaganda was everywhere - pictures, statues, continuous praise and applause for the leader. Mothers taught their children that Stalin was ‘the wisest man of the age’. History textbooks and photographs were changed to make him the hero of the Revolution, and obliterate the names of purged people.

To assure themselves of an endless supply of "traitors” the NKVD interrogators concentrated on two questions: "Who recruited you?" and "Who did you recruit?" The "confessions" often doomed casual acquaintances, friends, and even family. Even at a time when the threat of war in Europe was rising, much of the military leadership - the only remaining base of potential opposition - was executed. It was at this point that Stalin's method began to show definite signs of madness.

An indication of the vast scope of the Great Purge was the discovery, during the Second World War, in Vinnytsia (Ukraine) of a mass grave containing 10,000 bodies of residents of the region who were shot between 1937 and 1938. Given the lack of complete data, it is difficult to establish the total loss of life brought about by the Stalinist terror. An average estimate is that in the Soviet Union as a whole, about 500,000 were executed in 1937-39 and somewhere between 3 and 12 million were sent to labor camps.

With the start of the Second World War, Stalin's terror transformed into the extermination of war prisoners and "traitors". The largest of several simultaneous executions of prisoners of war - the infamous Katyn massacre - took place in April and May 1940 in the Smolensk region. It was a mass execution of Polish nationals, prompted by Lavrenty Beria's proposal to execute all members of the Polish Officer Corps. This official document was approved and signed by the Soviet Politburo, including its leader, Joseph Stalin. The number of victims of Katyn is estimated at about 22,000. Of the total killed, about 8,000 were officers taken prisoner during the 1939 Soviet invasion of Poland, another 6,000 were police officers, with the rest being Polish intelligentsia arrested for allegedly being "intelligence agents, gendarmes, landowners, saboteurs, factory owners, lawyers and priests."

After Stalin's death all of the victims of the purges (or as they were called, “enemies of the people”) were gradually rehabilitated.