Tethered to the land

For hundreds of years, from as early as the 11th century up to the middle of the 19th, Russians lived in a feudal society. At the bottom was a huge class of peasants, very few of them free. Most toiled their lives away as krepostnoy krestyanin, or unfree peasants, commonly known as serfs.

From the 11th till the end of the 16th century the elements of serfdom were scattered among certain classes of the rural population.

Not all serfs were the same. Smerds were serfs allowed to own property, although it’s also been a term used to refer to rural folk in general. Apart from nominally owning land though, they couldn’t leave the area they were born in and had to perform tasks for the good of the community as a whole.

Kholops were the lowest of the low. They were treated as true slaves. Their masters had complete control over them. They were able to kill them, sell them, or use them to pay off debts.

In the 13-15th centuries the amount of dependent peasants significantly increased, but the degree of slavery was not yet that severe. From mid-15th century, the serfs still were entitled to two weeks each fall when they could freely leave their masters after paying a certain fee, the fact of which was legalized in the Code of Law of 1497.

The 1649 the Code of Law made most of the serfs the property of estates, and made flight from those estates a criminal offence. From this point on, all serfs, no matter what their nominal category, were essentially slaves. Their owners could do what they wanted with them; sell them and even beat them for disobedience. In censuses soon after almost four fifths of the Russian peasantry were counted as serfs. The door had shut on Russian peasant freedom. 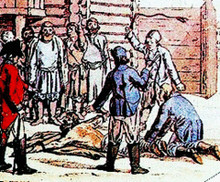 History knows many cases of the extremely unjust treatment of the serfs by their masters, one of most infamous, perhaps, being the story of Saltychikha. There were a few masters, however, who were relatively merciful to their serfs, showed them some support, and on some occasions even granted them freedom.

Not that the serfs took their slave condition lying down. Frequent rebellions erupted, often coinciding with Cossack uprisings in the south of Russia. For peasants living near the Cossacks, the only way to escape serfdom was to join them. In the decades before their emancipation, the serfs were in almost constant rebellion somewhere or other.

The daily lives of the serf owners were spent living in luxury, and trying to hunt down runaway serfs. Debates broke out between most of the landowners who wanted to have long time frames for hunting down runaways and returning them to their owners, and landowners in the south who wanted shorter search times because many serfs fled there. If the time period for finding them expired, they could be co-opted into the service of the new landowner. Increasing pressure was put on successive governments to state sponsor the hunt for runaways and impose harsher punishments on them. 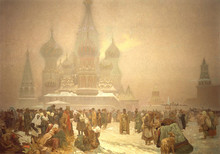 "The Abolition of serfdom in Russia", Alfons Muсha

By the mid 19th century Russia was the serf capital of the world. It had twenty three million slaves owned privately and the same number again working on state lands. By comparison the U.S. had four million slaves, the British Empire 770,000 and Brazil 750,000.

However this formula wasn’t making Russia any richer or stronger. Serfs still tilled the land with the equipment they had used for centuries, and while the efficiency of agriculture stayed low, increases in overall yield were only achieved by flogging the peasants harder.

The final collapse was precipitated by Russia’s embarrassingly bad performance in the Crimean war. It shocked the Emperor and convinced Russia’s leaders of the need for urgent reform in the shape of a market economy. 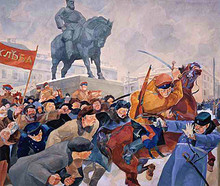 In 1861 all of the twenty three million privately owned serfs were emancipated following the decree issued by Emperor Alexander II, the Liberator, granting them the full rights of free citizens, to marry without having to gain consent, to own property and to own a business. However the legislation also had a drawback. The newly freed serfs were saddled with a crippling, ‘redemption tax’ to be paid to the former landowners. Many of them had to give away all their grain to pay the tax, leaving them with nothing to survive on. In 1866, emancipation followed for the twenty three million state owned serfs. Unlike the privately owned ones, they received larger plots of land to make a living from.

Serfs had a perpetually miserable time throughout history. Even after their supposed ‘emancipation’ their conditions barely improved. Eventually their anger would contribute to the revolution that destroyed the Tsarist system that enslaved and then tried to free them.