The Red Army (Krasnaya Armiya) was a common name for the Russian National Military Forces from 1918 to 1946, which was also known by the abbreviation RKKA (Workers’ and Peasants’ Red Army). The name refers to the color red. In the workers' movement red symbolized the blood shed in the struggle against oppression.

The Red Army was founded immediately after the 1917 Russian Revolution when the Bolshevik Party came to power. But the official day of its creation is considered February 23, 1918. This was when the Soviet Republic announced the first victory of the Red Army over the Germans on the very last days of Russia’ s World War I campaign.


Two weeks later the Bolsheviks signed a peaceful agreement with Germany, as it was difficult to fund the army, which was short of everything including guns, ammunition and human resources. Some historians argue that the victory never happened. However, February 23 is still today celebrated in Russia, Ukraine and Belarus as Defender of the Motherland Day.

The Red Army during the Civil War

Within two months Civil War broke out between the Bolsheviks and the remnants of the Old Russian Army. These two opposing forces were also called The Red Guard and The White Guard. The latter was heavily supported by the English and the Americans as well as by regiments from other countries that sough to intervene against the Bolsheviks in 1918.

As a result, the Republic of the Soviets found itself within a ring of opposing forces – with Cossacks on the South, Kolchak and Czech battalions in Siberia and British and American Corps in the North of Russia. It was quite a challenge for the newly born Red Army.

After several defeats in 1918 the Red Army managed to turn the situation around. One of the masterminds of this comeback was Leon Trotsky, a close ally of Lenin, who was later forced to leave the country by Joseph Stalin and then assassinated in Mexico. He managed to garner resources for a counterattack.


In 1919 the Red Army repulsed General Kolchak’s Army in Siberia and then launched a huge assault against General Denikin in the center of Russia. One of the most threatening forces at that time was the First Cavalry led by Semyon Budenny, who later became the Defense Minister of the USSR.

By 1920 the Red Army had succeeded in crushing all resistance in the European part of Russia and then moved on to fight in the Far East where battles lasted until 1922. In 1920-1921 the Red Army went to war with Poland but after a successful offensive the exhausted Soviets troops had to retreat. 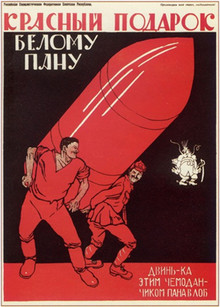 The events of the Russian Civil War are a point of heated discussion among historians. Many novels and films have appeared about White Guard Personalities like General Kolchak and officers on the southern front in 1920. But no one denies that the Red Army managed to take over thanks to the following factors:

- intense propaganda to persuade workers and peasants to fight on their side. One of the most popular songs at that time stated:“from he Taiga in Siberia to the British Seas the Red Army is the strongest of all”;

- well-structured military training that promoted the craft of war among the masses;

- persistent work to make White Guard officers change sides and turn to the Red Army as there was a huge deficit of well-trained officers to lead troops.

From its conception, the Bolsheviks introduced a new system of leadership in Red Army military units. Each unit, in addition to commanders, also had a politruk (political leader). These officers were appointed by the Bolsheviks to monitor the troops’ morale as well as every move of the leading officers. If the order of the commander contradicted the line of the Bolshevik Party, the politruk could cancel it.


The country’s leadership was aware of the dangers of this measure – the soldiers could get confused as to whose orders to obey. But at the same time it was more important to keep track of those whom the Bolsheviks could not trust completely, including officers who changed sides during the Civil War.


This tight control was eased in the middle of the 1920s when the country had enough officers trained on the basis of Soviet ideology. In fact, all the power in the Red Army belonged to the Soviets – the councils of workers and peasants - as in the rest of the country. One of their missions was to elect commanders to their posts as well as strip them of these responsibilities when necessary.


Brigade, division and army commanders were elected by the larger Soviets (either regional or the nationwide). However, this selection was tightly controlled – each candidate had to possess professional and communicative skills to lead the military unit.


The Bolsheviks introduced one more principle that had not existed in the Russian army, the so-called joint responsibility. If one soldier made a mistake, or in some way wronged the civil population, the whole unit was to blame. This principle was also used later on in the Soviet Army - many soldiers hated it.

Almost three-quarters of all Red Army soldiers came from villages. If you were lucky enough to get all the “blessings” from the regional Soviets you got into the unit and all your everyday needs were taken care of. In addition soldiers received from 50 to 250 roubles a month, depending on their rank, marital status and time spent in the army. At that time it was more than enough to survive in the poverty and famine stricken country.

There was no uniformity in the ranks though. Some became dedicated soldiers, others deserted right after they liberated their own villages. To cope with these negative effects the government introduced obligatory military service for residents.


Over a period of more than 60 years the draft procedure underwent some changes but the principle remained the same – every healthy and sound Russian had to spend some time - from two to four years - performing military service.


This draft law opened the door to the Army to people of various nationalities – in the old Russian Army they were banned from service. However, the ban for the children of merchants, priests and nobility remained in action till 1939 but even after that that time, they were still not allowed to enter military colleges.

In April 1918 the number of troops was less than 200 thousand. But by the end of the Civil War – in 1921 – the Red Army consisted of almost six million soldiers and officers. In the 1920s, to strengthen the war-weakened army, the military industry was given huge priority.The foundation of the military training facilities at various educational institutions became part of the Soviet lifestyle.


Some of the most successful soldiers were given a change to enter Higher Military Schools and after four years of training, every soldier received the rank of the officer. The army was drafted on a regional principle at first, but later, in 1930s, the system became nationwide with central command in Moscow. 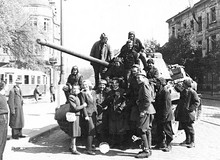 In the middle of the 1930s the Red Army held large-scale military exercises near the USSR’s western borders. Many observers from European countries were impressed with the performance of the Soviet troops. The exercises showed the talent of Marshals Iona Yakir and Ieronim Uborevich.

Two years later they were among dozens of high-ranking commanders executed by Stalin in the time of the purge. As documents reveal Stalin was intolerant of those who knew about his past and who criticized his firm leadership methods. Even the best and the most talented Generals lost their lives after spending some time behind bars.

This loss was felt later at the very start of Word War II. Marshals Kliment Voroshilov and Semyon Semyon Budenny – Stalin's favorites – could not organize the Red Army’s resistance to German troops that invaded Russia in June 1941.


Both military commanders were good at moving cavalry around but they had problems when it came to tanks and heavy artillery. So it took some time for the Soviet leadership to reposition its troops and establish the supply of weapons from behind the Ural Mountains to the European part of Russia.

At the beginning of the Nazi assault the Red Army comprised five million troops. Thirty million more were conscripted over two years. The defeat of the Nazi Army in Stalingrad became one of turning points of WWII. It revealed the talent of Marshals Georgy Zhukov, Vasily Chuikov, Ivan Konev, Alexander Vasilevsky and others. They were the new leaders of the Russian Army - from the great tank battle of Kursk in 1943 and the liberation of besieged Leningrad in 1944 to the taking of Berlin in 1945.

But the Soviet leadership was also concerned about the image of the Army. In 1943 the Defense Ministry introduced a new insignia with loops which made the uniform much more attractive.

After WWII, the Red Army was renamed the Soviet Army (Sovetskaya Armiya). It preserved the name until the dissolution of the USSR in 1991. But the Red Army brand survived. Many cities and streets were named after the Red Army (even now in Russia there are more than 20 towns called Krasnoarmeisk which means Red Army Town).

The name Red Army was sacred to many people who knew little about Russia during the times of the Cold War. In 1975 the Russian CSKA hockey team toured North America and performed extremely well. The game on 31 December 1975, between the Montreal Canadiens and the Red Army (the Soviet club was promoted in Canada and the US by that name) has been dubbed by critics the best ice-hockey game ever.