The heart of Russian cuisine

A plate of pelmeni might not look like much to the untrained eye, but it forms the heart of Russian cuisine and culture. It's served in every Russian restaurant, cooked in homes across the country and every family likes to think it has its own special recipe. 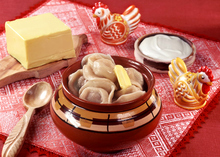 So what is pelmeni? Basically, it’s a type of dumpling consisting of a particular filling that is wrapped in thin uneven dough. It is usually accompanied by lashings of sour cream. The fillings differ but essentially they are minced meat (pork, beef or sometimes lamb), fish or mushrooms - and watch out, they can get very spicy depending on the amount of herbs, onions and black pepper used in the seasoning. Pelmeni breath can last a few days...

The history of pelmeni


The word itself comes from pel'nyan' literally "ear bread" in the native Finno-Ugric Komi and Mansi languages. No one knows for sure when pelmeni first entered Russian cuisine but one theory suggests that stuffed boiled dumplings in general, originated in northwestern China - this would explain the use of spices such as black pepper, which are not native to Russia and had to be imported.

The general thought is that pelmeni were carried by the Mongols to Siberia and the Urals and then gradually spread as far as Eastern Europe. The dish was particularly favored by hunters, who were looking for light, easy-to-prepare, nourishing food to take with them on long trips in the winter.


Although Pelmeni is a Russian national dish, it does have numerous look-a-likes - in particular the Ukrainian vareniki and the Polish pierogi, which are varieties of dumplings filled with mashed potatoes, cheese or berries. The easiest way to spot the difference is to look at the shape and size; a typical pelmeni is almost circular and about two inches in diameter. The other forms are usually more elongated and larger in size. Also, pelmeni will never have a sweet filling, unlike its Ukrainian counterpart.

Another distinguishing feature of the hardy pelmeni is that it can be kept frozen for long periods of time with little loss of quality or flavor; in fact the water they're boiled in can be great for making soup. Indeed freezing pelmeni is a popular choice. In Siberia the dumplings are generally frozen outdoors and preserved through the winter, and then taken on long journeys, as the food is non-perishable and easy to cook.


But pelmeni is not just found in the big freeze of Siberia. Wherever there is a Russian community you're bound to find some ready-to-cook pelmeni lurking. It's become a part of everyday life, and in big cities the store bought variety is seen as a kind of Russian fast food - a favorite among students and bachelors.

Cooking usually means boiling for about 5 minutes, either in water or clear broth – in which it can later be served. Some recipes suggest frying the pelmeni after cooking until they turn golden brown. Then, once ready, the dumplings are served up with a dollop of sour cream, or sometimes butter, mustard or horseradish.

Here is a recipe to try:

To make the dough, combine the flour, eggs, water and salt. Knead mixture. Let rest for 30 minutes. Mix the ground beef, ground pork, onions, salt, pepper and garlic together. Cut the dough into three equally sized pieces and roll each one into a cylinder the diameter of a finger.


Cut each cylinder into pieces the size of a walnut, then roll each piece into a very thin flat cake with a diameter of about 2 inches. Put some of the ground meat mixture in the center of each flat cake (quite a lot, but not so much that you can't seal up the dough). Then fold the dough in half and join up the edges to seal them. Pinch the corners together: you should now have a ravioli-shaped "flying saucer."

Boil the pelmeni in salted water for seven minutes, or until they float to the surface. Serve them in soup plates with sour cream or in broth.