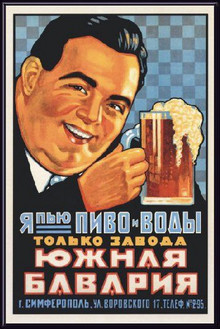 It was an idea based on ambition and imagination; an idea that worked so well, it managed to drag an entire country out of starvation and chaos and drive it onto the road to quick economic and industrial recovery. It created capitalism in a socialist state and cabaret-style debauchery under a military-communist regime. And like many other great yet paradoxical projects, perhaps, the Soviet Union’s New Economic Policy of the 1920s was too visionary to remain sustainable for long.

The year is 1921. Russia has just survived two revolutions, WWI and the Civil War. Not only the last royal family but the entire empire is gone, executed and left to deteriorate. Significant territories including Poland, Finland, Latvia, Lithuania, Estonia, parts of Ukraine, Belarus and more lands have either broken away or been taken away, while the population has diminished by at least twenty five million people. Production has fallen to the levels of the times of Peter the Great, hunger and devastation are the general picture all around. In fact, things are going so bad, even the revolutionary leadership, backed fearlessly by millions of people just a few years before, is itself becoming a target of mass anger. Fresh uprisings grip Siberia, the southern and western regions and even spread to the Red Army. The new communist regime headed by Vladimir Lenin and Leon Trotsky realizes something needs to be done quickly to prevent the country from falling into complete chaos and anarchy.

One of the first measures taken by the Communists was the reduction of the farmer’s tax. During the First World War and throughout the Revolution all farmers were obliged to give most of their production to the state to provide food for the entire nation. Following the destruction of the Empire, the inexperienced new regime faced a serious lack of resources while struggling to keep itself and the country alive, due also to several economic blockades by the West. Back then about 80% of Russia’s population were farmers and so they were nearly the only force capable of supplying the country with food. But it wasn’t long before the enormous taxes started fueling mass anger and uprisings. When this tax was cut by half in 1921, peasants received an incentive to work again and the farming industry began its recovery.

Capitalism in a socialist state 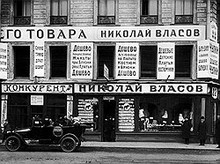 The farmers’ tax reduction wasn’t the only measure introduced – the Communists announced they were starting a nationwide New Economic Policy. It was officially planned as a temporary measure and its main goals were to ease social tension, strengthen the communist regime, get out of the economic crisis, rebuild the industry and lay down the foundation for socialism without waiting for the global revolution. What’s interesting, and in some ways paradoxical, especially for those times, was that all of the above was to be achieved through market relations or, in other words, capitalism. So the second major step taken by the communists was to allow private property even though abolishing it was one of the key slogans of the 1917 Revolution.

State monopolies were officially overruled. The authorities eased the rules of registration for private businesses and starting from 1923 foreign companies were allowed to use Soviet state facilities. The project also included a money reform and gave the green light for long-term loans and new banks. 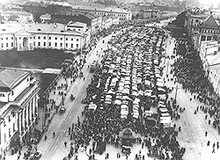 Free trade of the NEP era

The results were astonishing. Market relations quickly infiltrated almost all spheres of life. In just five years Russia’s production grew by three times and surpassed pre-war, Tsar-era figures. At one point the ruble became stronger than both the US dollar and the Royal pound. Although, ironically, foreign trade was conducted using old Imperial golden coins which pictured not Soviet symbols but Tsar Nicholas II who was executed by the same communists in 1918.

But, perhaps, the experiment, no matter how successful it was turning out to be, was already doomed. 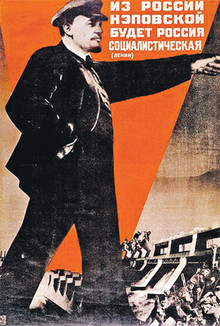 Lenin’s health began worsening almost from the start of the NEP. He had a first stroke in May 1922 followed by a second one in March 1923 that heavily damaged the communist leader’s brain. Perhaps, realizing he didn’t have much time left, Lenin began looking for a possible successor and put together personal characteristics of some of the Party’s most prominent figures of the time, including Trotsky and Stalin. Lenin warned that giving Jospeh Stalin the seat as the Party’s secretary general would give him too much power which, according to Lenin, would be dangerous due to Stalin’s crude temper. But the hidden fight for power was already in full swing.

By the fall of 1923 Stalin began openly forcing Trotsky away from power, turning the Party against him. Lenin died in January 1924 and by December the same year Trotsky was removed from all commanding posts while Stalin’s political weight gained strong momentum.

The end of the NEP

Stalin quickly began redirecting most of the power strings into his own hands, which did not leave the economy unaffected. From the second half of the 1920s, authorities began shutting down industrial syndicates and forcing private capital out of the economy. In 1928 they announced the start of the first five-year plan for the country's industrial and economic development based on severe control by the state. The Communist Party took the course of fast nation-wide industrialization and many historians believe it's at this point that the NEP's existence ended. The final step officially shutting down the project was the Party's decree to prohibit all private trade in the country in 1931, snuffing out the remaining signs of capitalism. 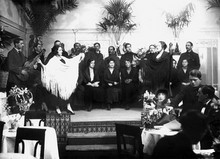 It's impossible to underestimate the NEP's effects on society and culture. The new policy gave birth to a whole new sort of people – NEPmen. Focusing solely on quick enrichment these newly emerged businessmen didn’t bother much about politics and were more interested in entertainment and finding ways to spend their money. During this period fine arts lost their influence on mass culture and were substituted by much simpler forms of entertainment – cabarets and restaurants. Classical music was out and short and simple cabaret-style songs were in. The same sort of degradation also flooded the theater and the press. In the wake of the NEP, Soviet art entered the era of social-realism – a new form of art meant to promote communist ideas, while the press also fell under the full control of the Party.