Kompot (or stewed fruit) is a traditional Russian dessert beverage that combines an assortment of fruits with rich, thick syrup.

The base of kompot is, of course, the fruit. Among the numerous recipes one may find some that use dried fruit, while others advise berries and still others call for preserved summer fruits - or an assortment of whatever looks good and edible. Depending on the type of fruit used, the spicing and level of sweetness is usually adjusted to make the fruit compote's flavor optimal.

Slow cooking is important, so the fruit retains its shape. The result may be served warm or chilled. Kompot is extremely easy to make at home and home cooks can create unique versions with special fruits to taste.

As each season bristles with this or that fruit it’s possible to make big batches of kompot and then chill or freeze the rest to drink at another time - usually in winter in order to feel nostalgic about summer or impress your friends with your outstanding culinary abilities.

Kompot is a wonderful soft drink all year round – refreshingly cool in summer or invitingly hot in mid-winter.

Here is a recipe for you to try at home: 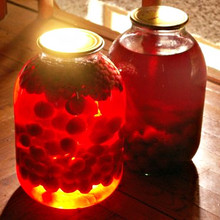 To make fruit kompot, start by making syrup from water simmered with sugar, lemon juice, and vanilla or liqueur. Next, add evenly chopped fruit and cook it on low heat until the fruit begins to soften. When mixing harder and softer fruits, add the softer fruits later so that they do not disappear while the harder fruits cook. The length of cooking varies, depending on individual taste, with some cooks preferring to just briefly warm the fruit, while others stew it to a soft, even texture. To make kompot taste even richer, add a few leaves of fresh peppermint three minutes before the drink is cooked. It can be served either warm or cold.

During the Soviet period one of the main markers of a model household was the number of big three-liter jars of kompot a housewife managed to seal and store up for winter.

In order to be called an ideal housewife women spent long tiresome hours at their dachas picking berries, buying everything that could not be grown and brewing fruit and berries for days.

Every self-respecting housewife possessed a peculiar device called “a jar sealer” that served quite a clear purpose and couldn’t be managed without.

During a certain period of Russian history when shops were literally empty and it was impossible to buy anything really tasty, such preserves were both a necessity and a treat. But even today, when shops offer more food than can actually be consumed and there is no practical need of wasting time and effort sealing endless jars of kompot, for many people, especially the elderly, it is a habit they find nearly impossible to get rid of. It is still common to hear old women - babushkas mainly -  boasting about how many jars of kompot they have produced. 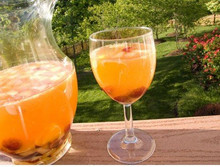 Quite a number of enterprises in Russia used to have a canteen for their employees; Russian universities and institutes displayed the same concern for their students. The cheapest, most frequent and sometimes the only meal there was (and still is at some places), could be found here. The fixed meal consisted of some watery soup, a modest helping of the main course and an ever-present glass of kompot for dessert. Russians grew so accustomed to the sight of the usual kompot at the end of the meal they were ready to put up with the fact the world might collapse but they would simply not understand what was going on if one day they were not served the customary glass of kompot.

Love for the national dessert beverage grew so strong that it was never ridiculed in films. Today, the phrase “And where’s my kompot” signifies that a person is sincerely puzzled as to why he has not been given something he should have clearly been given no matter what.

The traditional Russian drink has become so popular throughout the world that today a few international versions of this beverage exist. In France for example “compote” can also be a fine puree of cooked fruit made with a base of apple, with the possible addition of apricot, pear or various other fruits.

In the United States alcohol is sometimes added to the fruit mix thus making a low-alcohol smoothie-like cocktail.

In the UK the traditional syrup is diluted with vanilla, lemon or orange peel, cinnamon sticks or powder, cloves, ground almonds, grated coconut, candied fruit or raisins and topped with whipped cream or ice-cream.

With a handful of fruit and berries, an hour or two, a good mood and a bit of imagination you too can make Russian kompot; chilled or warm, spicy or just sweet, traditional or inventive. And make sure you seal a jar or two to drink several months later.