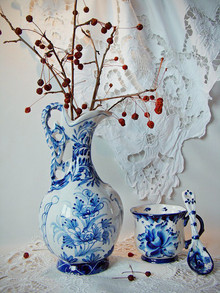 Blue on White a la-Russe

Gzhel, a picturesque area 60 kilometers southeast of Moscow, is known as one of the oldest and largest centers of china production in Russia, a true cradle of Russian ceramics. Gzhel is also the word for traditional Russian blue and white porcelain produced there since the 19th century - the region is famous for it.

A long way to go

Gzhel’s ceramic production has a long history. Archaeological research shows the first pottery appeared here already in the 14th century. Ceramics seem to be something Mother Nature herself created this area for: craftsmen could not find a better place than this, with its rich and beautiful woods, crystal clear rivers and fabulous clay. "Nowhere did I see a clay whiter than this," exclaimed a medieval chronicler.

For centuries the region provided the entire country with household crockery, brick and roof tiles. Although it produced hundreds of thousands of items each year - an enormous amount for these still remained “knick-knacks.” 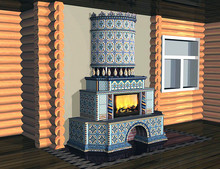 The 18th century made Gzhel famous for its wonderful majolica colored clay with polychrome paintings on white glaze. But it was the 19th century that marked the dawn of Gzhel’s Golden Era and the beginning of Russian china, as the craft evolved from semi-faience to faience and later to porcelain.

The items painted in deep-blue were ones of a special interest. Local craftsmen as well as entire factories were all involved in production of blue and white tableware, vases, toys, animal and bird figurines and statuettes of horsemen or dancers.

The end of the 19th century and the start of the 20th brought a deep crisis. Gzhel’s art was about to disappear. Only after the 1917 Bolshevik Revolution and a nationalization campaign throughout the country did the craft see its revival.

Today Gzhel is at its peak. Designers and potters, many of whom descend from generations of local craftsmen, try to keep traditional shapes and decor, notable for their folk features. The youngest masters, preserving old traditions, enrich this precious heritage with their own finds. As it was before, today all the pieces are hand-made and hand-painted, and every item is a piece of art on its own. 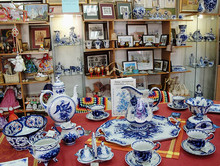 Gzhel produces tea, coffee and dinner sets, samovars, vases, candlesticks, clocks, lamps, statuettes and figurines of more than 2500 varieties. Gzhel porcelain enjoys far-reaching popularity both in its native country as well as far beyond Russia with many art lovers and connoisseurs around the globe yearning to get one or two precious pieces for their collections.

Gzhel blue and white porcelain, although of a high quality, is relatively cheap compared to its English or Chinese equivalent. One can easily buy any piece of Gzhel’s china art through the Internet.