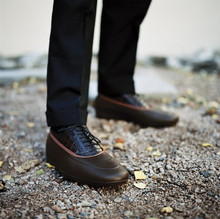 Kaloshi (or Galoshi) are rubber footwear, worn over boots or shoes to prevent them from damp and mud. Such footwear exists in a lot of countries, but in Russia it is treated with special respect. It came into wide use in the 19th century and became something of a symbol of this entire era in the 20th century.

What’s in a word

There is a lot of debate around the name for this footwear. In Russia, there were words such as "mokrostupy" ("walkers in the wet"), "gryazoviki" ("mud-walkers") and "stupni" (“feet”). But "kaloshi" supplanted all other names: there were similar words for such footwear in French and German, and the word already existed in Russian. Kalosha (the singular from kaloshi) was used to mean a trouser leg, gaiter or any piece of clothing from knee to foot. So in the end, kalosha was the name that survived, though different variants of spelling persist. The initial K (kaloshi) is considered the official version, but an initial G (galoshi) is also possible, particularly in spoken Russian.

The exact date of the kaloshi’s invention is unknown, but Russians have been using them for ages. It is natural that people wanted to protect their shoes, especially in Russia where roads have never been perfect. Before production of kaloshi became industrial, they were handmade from leather, sometimes even with fur inside, so they could protect not only from mud, but also from the cold. Records of such warm kaloshi can be found, for example, in the stories of the famous Russian writer Anton Chekhov. One of his characters, Zotov, wears “clumsy leather kaloshi made by shoemaker Prokhorych."

In the 19th century, Russians wore kaloshy in the city for practical reasons, whereas in the countryside they were more a tribute to fashion. This was the time when kaloshi entered mass production. They were made of rubber, so they looked neat and shiny. Many young countrymen put on kaloshi when they wanted to dress up. Ethnographers describe male festive rural costume as follows: a red kosovorotka (traditional shirt with collar fastening on one side), velveteen trousers, a jacket with two rows of metal buttons, high boots - and kaloshi over them. 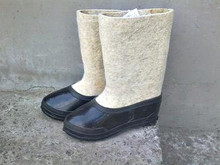 At the beginning of the 20th century, hardly any Soviet person could do without kaloshi. In the country of workers and peasants, there could be no better footwear. Kaloshi were very practical and comparatively cheap. Anyone who grew up in the Soviet Union would confess that in winter, their usual footwear was valenki (felt boots) with kaloshi over them.

In winter, thousands of children in the USSR wore valenki with kaloshi.

Not only simple workers, but even Soviet party leaders opted for kaloshi. M. A. Suslov (one of the Soviet leaders and ideologists of the second half of the 20th century) was known for his devotion to this footwear, it was his trademark trait. He never parted with kaloshi, even when it was dry and sunny outside.

Once, Suslov visited the editorial office of the well-known Soviet newspaper Pravda. On entering the building, he left his kaloshi on the porch, but somebody stole them. When the editor found this out he was terrified! State leader's kaloshi theft in the editorial office of Pravda, stronghold of Soviet ideology! It sounded like a provocation. To save the situation, one of the journalists invited Suslov to his room for an extra cup of tea, so that another could rush to the nearest shop and buy a new pair of kaloshi, four pairs to be on the safe side! Thus, Suslov left the office safely wearing his kaloshi, while three more pairs remained in the editorial office - for other state visits. 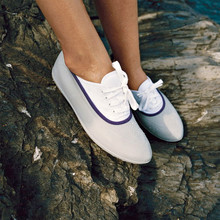 Kaloshi have not been abandoned nowadays, either. There are a lot of different types, made of different materials. For example in Scandinavia, where the climate is very similar to Russia, they have created fashionable kaloshi made of colored rubber for shoes and even pumps. Such kaloshi may have a zip and a special hole for the heel.

Language is a keeper of history, and in Russia there are plenty of songs and poems mentioning kaloshi. Any Russian with a Soviet past would name you the song "Mother bought for Lesha wonderful kaloshi" (Kupila mama Leshe otlichnye kaloshi), or the famous rhymes of Soviet poets Korney Chukovsky and Vladimir Mayakovsky.

The word "kaloshi" is also widely used as part of set phrases, which have negative connotation. For example, "sest v kaloshu" (literally "to sit in a kalosha") means to get into a mess. Or "staraya kalosha" (literally "old rubber shoe") means an old decrepit person, old boot.

We even have a special award, the "Serebrianaya kalosha" (“Silver kalosha”) for "the most doubtful achievement in show business". It was established by Russia’s Silver Rain radio station. The award is similar to America’s Golden Raspberry, given to the worst actors, stage directors and so on. Categories for the Silver kalosha differ from year to year, but usually involve mocking phrases like "Not avatar of the year", or "for a long life in art, which does not coincide with art". But one nomination remains unchanged: plagiarism of the year.

So in spite of the fact that the humble kalosha does its best to serve the Russian people, it still has negative connotations within set phrases.

Zastoy Two and a half decades of stagnation period during Leonid Brezhnev's leadership preceeding the Perestroika.