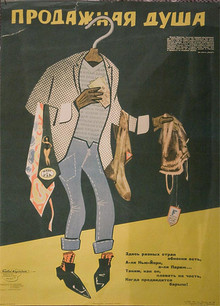 The fartsovshchiks were illegal traders in the USSR from the 1950s up to the collapse of the Soviet Union in 1991. They dealt in goods that could not be obtained through legal stores in the country. Some of these were brought into the country illegally without any customs duties, or bought from foreigners that came to the USSR. The fartsovshchik is not a spiv. These Russian black-marketeers helped rank-and-file citizens of the USSR look trendy and modern.

The origins of the word are unclear. Some say this word sprang up from the English “for sale” and got changed. Others suggest it goes back to the term “forets”. In the Black Sea port of Odessa, this word denoted a person who could easily buy items from sailors and resell them with 200 or 300 per cent profit.

The city of Odessa is considered the birthplace of fartsovshchiks. Even in the 1930s, you could buy all the latest clothes from the West at the local markets. Some traders used not just money to buy items from foreign sailors – they offered traditional Russian clothes and souvenirs, vodka and caviar.

Fartsovshchiks emerged en masse after the 6th World Festival of Youth and Students, held in Moscow in 1957.  36,000 people came to Moscow for two summer weeks.  Some of the guests brought a lot of trendy clothing. Even a pack of Marlboro was considered a “fashionable” item. The festival gave birth to the stilyagi (stylish guys) who used to wear trendy jackets, trousers and dresses bought from westerners. This was the key “target audience” for the emerging fartsovshchiks. They tried to buy things from foreigners, sailors, and Soviet citizens who were going out of the country for work – such “occupations” were considered a luxury at that time.

Another factor that boosted fartsovshchiks all over the country: until 1991, the rouble was not convertible. The official exchange rate of the 1960s was 90 kopecks to one US dollar. The black market rate was around 3 roubles a dollar. So if one needed foreign currency, fartsovshchiks were the only people who could do the deal.

That business was a risky affair. Article 88 of the USSR’s Criminal Code said a person could get up to 8 years in prison for the sale of illegal goods and illegal currency operations. That’s why fartsovshchiks had to cover up their activities. And one of the things they did was to use special slang.

US dollars, for example, were called griny (‘greens”). The name for a group of foreign tourists was firma (which means “firm” or “label”, with the stress on the second syllable). Buying goods from firma was called “bombing”.

So what did the first fartsovshchiks buy? Primarily, clothes from the West. You could sell practically any piece of cloth if it had a “label” – a brand name that everybody would recognize. Over the years, the most sought-after item all over the USSR was American jeans. Nobody would ever buy them unless they had the Levi’s, Lee or Wrangler labels. The last brand name was always mispronounced – not all people knew that the first “W” in this word is silent. That’s why many people called them “Vrangel”, like the White General defeated by the Red Army in the Crimea in the 1920s. Fartsovshchiks used to sell jeans for as much as 150 roubles (a little over the average monthly salary in the USSR). By the 1980s, a pair of Levi’s was worth 300 roubles.

Here's a list of other "precious" items for fartsovshchiks: 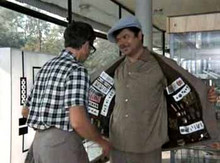 - Cigarettes, preferably Marlboro. These could be purchased for 2 roubles a pack. Salem were considered a luxury item because they contained menthol - unusual for rank-and-file Soviet citizens.  They could be sold for 4 roubles. The price for Soviet cigarettes was around 25 kopecks.

- Trendy rock’n’roll and jazz records. The price for a good item (like Led Zeppelin II or The Wall by Pink Floyd) could be as high as 20 roubles. The Rolling Stones and The Beatles were half the price.

- Radio sets and tape recorders. The most sought-after items were Japanese brands like Sony, Sanyo, Toshiba and Hitachi. The dream of the Soviet music fan in the 1980s was a twin-deck Japanese tape recorder. That kind of item could easily set him back by 600 roubles.

- Clothing (dresses, shirts, T-shirts, leather jackets, boots). These were in demand only if there was a label on them. Otherwise, no one would ever believe that the item was genuine.

- Condoms (those produced by the Soviet pharmaceutical industry were made of thin rubber, and caused pain during intercourse).

Most of the booty was sold at special gatherings held in secret locations. By the middle of the 1970s, some experienced fartsovshchiks had established good connections with second-hand stores – one way of making their merchandise legal. Another source of income was forging – one could easily put a label on an item “Made in the USSR”, and sell it at double, or even triple the price.

Police and security forces posed a constant threat for ordinary fartsovshchiks. If illegal traders were caught, the case was made public in Soviet newspapers as well as on TV. At Communist Party and Komsomol (Youth Communist League) meetings, people were always convinced not to buy anything from fartsovshchiks. But these measures fell flat – by the 1980s, the whole country knew that you had to pay for a good brand.

After the collapse of the USSR, the problem of supply vanished – money became the only thing that counted. Some fartsovshchiks could not adapt to the new marketing ways, and ended up in jail. Others legalized their income and became very prosperous businessmen. They say that if they had lived in a free society, they would not have been able to achieve such success.