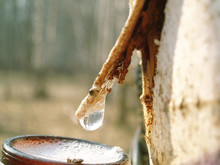 Beryozovy Sok (birch juice) is the sap from a birch tree. It is a water-like sweet liquid. It’s the only kind of juice in Russia that is venerated in songs about the love of the Motherland. The ancient Slavs worshipped various Pagan gods. And birch was one of the most sacred trees. At that time it was forbidden to take the juice out of the tree for regular use – it was to be saved for rituals. But after the introduction of Christianity the ban gradually disappeared. And people started to collect birch nectar for everyday needs.

To collect the sap you have to go to the birch grove, of course. The only time you can get the juice is during the 20 day period from the middle of March to the beginning of April – that’s when the core of the tree is filled with juice. During some winters this period may be reduced to 10-12 days. Because of melting snow it’s important to wear rubber boots – otherwise one can get soaked.

There’s no other way to do it – the only time you can collect the juice is during the 20 day period from the middle of March to the beginning of April – that’s when the core of the tree is filled with juice. During some winters this period may be reduced to 10-12 days.

So, when in the grove you should take these five steps to get the birch juice:

Professionals say that a small birch can produce up to 5 liters of juice per day. But you’ve got to make sure that you’ve done no harm to the tree – your cuts have to be small. The other rules are:

Fresh birch sap can be preserved for 5-6 days at most. There are two ways to preserve it: if you do it at home, you freeze it. In factories you have to pasteurize it - this slows the growth of microbes. If the juice is preserved for a long time its taste may become distorted. 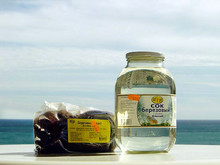 The price for birch sap differs in many countries. In Japan it can reach the equivalent of 70 U.S. dollars per liter. But in USSR it was produced on a mass scale. That’s why it was the cheapest juice to buy - it cost seven or eight kopecks for a 250ml glass (a glass of tomato juice, for example, used to cost from 10 to 12 kopecks). It was also sold in 3-liter jars. There was never a shortage of birch juice – as was the case with meat and dairy products. This generated gossip about the lack of authenticity of the juice – people joked that the birch juice was just a mixture of water, sugar and lemon acid – which was never the case.

But at the end of the 1980s birch juice became a rarity in stores. The reason – the horrible nuclear disaster at the Chernobyl power plant in Northern Ukraine, one of the key areas of juice collection. Harmful clouds caused acid rains in other “juicy” places in European Russia, which led to the eradication of mass production.

Now birch juice is being brought back into tradition thanks to body-builders and fitness instructors as it contains sugars, proteins, amino acids and enzymes – the key elements that help you stay fit. It’s also good for the stomach. The price for a 1.5 liter bottle for fitness purposes is about 5 euros.

At the beginning of the 1970s a popular folk-rock group from Belarus called “Pesnyary” recorded a track called “Birch Juice.” In the ballad, a man who has to work outside the USSR for the good of the Motherland recalls a moment from his childhood when he drank birch juice. He wants to return home as quickly as possible to enjoy the taste of this sweet refreshing drink. Thanks to this song the juice – like the birch itself – became a symbol of the love of the Motherland.