Foreigners in Russia: The Mons Family 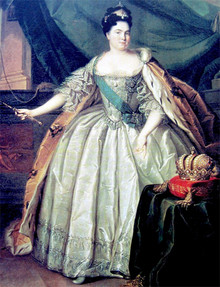 The Mons Family was a family of German immigrants living in St. Petersburg during the life of Peter the Great.They became greatly entangled in the affairs of the Russian court and were prone to scandal and tragedy.The eldest daughter of the family, Anna Mons, was a favorite and lover of Peter the Great. Her brother Willem Mons became the secretary and confidante of Catherine I, Peter’s second wife.He was eventually charged with embezzlement and bribe-taking and was publicly executed.However, many speculate that the real reason behind his sentence and swift execution was Peter’s jealousy at the intimacy of the relationship between Mons and Catherine, with some even proposing that the two were lovers. Whatever the cause, the Mons family left an indelible mark on the private lives of the royal family as their constant involvement in scandals and affairs would lead to bloody consequences.

Johann Mons and his First Daughter: The Beautiful Anna

Johann Mons was a German immigrant who lived in the German Quarter of St. Petersburg.Some say he was a gold jeweler, others a wine merchant; his exact profession has been lost to history.He had a family of four children, Anna, Willem, Matryona, and Filimon.

Anna Mons was born around the same time as Peter the Great, some sources say 1672, some 1675.In either case, however, the two were close in age.Peter and Anna first became acquainted in the German Quarter around 1690, with some saying that Peter’s tutor and friend Franz Lefort made the introduction.  Anna was described by many to be one of the most beautiful and enchanting girls ever seen, and the young Peter was immediately taken with her.  In Peter’s pursuit of the German beauty, she would eventually become his favorite, as well as his mistress, even though the Tsar was already married to Yevdokia Lopukhina.  The relationship lasted twelve years, and the Mons family received several gifts from the Tsar during its course.  However, wherever Anna went, rumors followed.  Some say that she was involved with Lefort before she even met Peter.  Others say that in all the twelve years of their relationship, Anna Mons never really loved Peter, noting that in examining ten years of correspondence, Anna never once wrote any love letters to the Tsar.  As Peter’s relationship with Yevdokia worsened, he began to have thoughts of marrying Anna, and in 1698, about one week after his return from the Grand Embassy to Europe, Peter sent his current wife Yevdokia away to the Suzdal Monastery.Peter was already openly living with Anna in their home by 1703, but they would never marry.  Instead, a heartbreaking discovery was made.Later that year, a ship carrying the ambassador from Saxony to Russia sank in the Neva River.The ambassador, F. Koenigsegg, drowned.  Found among his possessions were love letters from Anna, as well as her medallion.  The letters dated from a period of time five years earlier, when Peter was in Europe on his Grand Embassy.Peter was stung by the news.In 1704, Anna started a flirtatious relationship with Prussian Ambassador George-Johann Von Keiserling.  Some say that Anna’s motives were to try to rekindle the Tsar’s lost affection, but it was too late.The Tsar was heartbroken, and in 1704 had Anna placed under strict house arrest.

Keiserling lobbied hard for Anna’s release, asking the Tsar’s permission to marry her.However, Keiserling’s efforts were met with even more strange news, hearing that the Mayor of St. Petersburg Aleksandr Menshikov claimed to have also had interest in Anna, had tried to seduce her himself, but now considered her to be a ‘public woman’.This was enough to infuriate Keiserling to challenge Menshikov to a duel, a challenge that was never answered.

Keiserling eventually gained Anna’s release and permission to marry in 1707, and the two were eventually wed on June 18th, 1711.However, less than a year would pass before Keiserling was killed on his way to Berlin.  The facts of his death are not known, but Anna was left a widow.  She died three years later of tuberculosis in 1714 at the age of around 40.  Peter would eventually re-marry with Marta Elena Skavronska secretly in 1707; she would eventually become known as Catherine I.

Peter’s relationship with Anna was complex.Franz Vilbua wrote in his book Tales of the Russian Court  that Peter “would have married Anna Mons immediately, if only the foreigner had honestly answered the truly strong love that Peter showed for her.  But she, even though she showed her thanks and deference, could not return the Tsar’s affections.Moreover, there are secret accounts that she secretly harbored disgust for him which she was never quite able to hide.His Highness noted it on a few occasions, and for that reason left her behind, although with great disappointment.  But his lover, in accordance with her character, it seems was easily comforted…”

On a mysterious note, not a single image or portrait of Anna Mons has survived.History has no record of what one of the most beautiful women of her day ever looked like.

However, this would not be the only chapter in Russian history concerning the Mons family.

Willem Mons was Anna’s younger brother, born in 1688.As Anna fell from the Tsar’s graces, Willem joined the Russian service in 1707 at the behest of Anna’s future husband Keiserling.Willem rose through the ranks, eventually becoming personal adjutant to the Tsar by 1711. At the same time, Willem’s younger sister Matryona Mons had become best friends with Catherine I, and introduced the two of them.With Matryona’s and Catherine’s support, Willem was promoted again; this time he was put in charge of managing several of Peter’s estates.Willem’s relationship with Catherine also grew more intimate at the same time.He became her personal secretary, accompanying her on all her trips abroad.However, Willem’s ride to the top of imperial favor left many among the Petersburg elite jealous.Rumors and gossip abounded, planting seeds of suspicion that the relationship between Catherine and Willem was more than purely professional.In 1724, after Catherine’s official coronation on May 7th, Willem was promoted to Imperial Chamberlain of the Tsar, but he would not hold the title for long.The rumors concerning Willem finally reached their climax, and Peter received an anonymous letter not long after Willem’s promotion, hinting at a secret affair between Willem and Catherine, and that Willem was planning to poison the Tsar and rule together with Catherine in his stead.  While Peter may have found the notion of being poisoned humorous, the idea of an affair between Mons and Catherine struck him very close to the heart.  Only a few months after his promotion, Willem Mons was charged with embezzlement and bribe-taking and arrested on November 8th, 1724.

Peter was careful to disguise any personal motivations for the charges with economic crimes, but the investigation and execution were unusually swift.Willem was subjected to quick, rough interrogation and a week later was sentenced to death by decapitation.He was beheaded on November 16th, 1724, his body left to rot on the scaffold for several days, and his head preserved in alcohol.His younger sister, Matryona Mons, would suffer as well.  Immediately after her brother’s execution, she was flogged on the exact same scaffold where her brother’s decapitated body had collapsed just moments earlier before being sent into exile in Siberia.Willem was 36 years old.

Bring me the head of Willem Mons!

The whereabouts of the preserved head of Willem Mons remain a topic of discussion to this day.  Popular legend states that the head was discovered in the archives of the Russian Academy of Sciences at the end of the 18th century, and that it is currently on display to the public at the Kunstkamera Museum of Natural History in St. Petersburg; a gruesome reminder of the power of the Tsar and the price of influence in the Russian court.

The Mons Family The Mons Family was a family of German immigrants living in St-Petersburg during the life of Peter the Great and greatly entangled in the affairs of the Russian court.