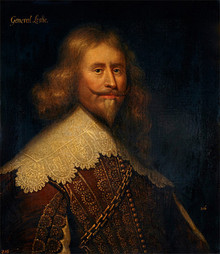 Alexander Leslie of Auchintoul was a Scotsman who served as a soldier in the Russian army and was the first foreigner to achieve the rank of General.  Serving under many Tsars and Kings during his time in Russia and Eastern Europe, Leslie would become a key figure in the second and third sieges of Smolensk, as well as in Tsar Aleksey Mikhailovich’s army reforms.  He would eventually found a new branch of the Leslie Clan in Russia, as his descendants would make Russia their new homeland.

Alexander Leslie’s origins are not entirely clear, and there is no specific date given for his birth. It is clear, however, that he was born in Scotland and travelled to Europe as a mercenary soldier in the early 1600’s. Scots were well known for their battlefield prowess and experience as soldiers, and therefore were highly-sought after as mercenary soldiers. They had experience with varying kinds of warfare, weaponry, and organization, which made them ideal commanders for the various armies of Europe. Leslie fit that description perfectly. It is not known whether or not he served with one of his relatives (perhaps father) of the same name under the Swedish King Adolphus in 1608, but by 1610 he was in the service of the Polish King during the first siege of Smolensk in the Polish-Muscovite war of 1605-1618.

The Polish-Muscovite war was a long and complicated conflict that partly arose from the death of Ivan IV (also known as Ivan the Terrible) without an apparent heir to the throne of Russia.  This led to several internal divisions and power struggles for the throne both within the country and abroad.  Today, this period of time in Russian history is known as “The Time of Troubles”.  The Polish King Sigismund III saw the internal struggles of Russia as a chance to intervene and take control of the throne himself, and began several Polish invasion campaigns headed by imposters to the Russian throne (known as the False Dmitrys) to try and capture Moscow.  One of the sites of battle was the town of Smolensk on the Russian-Polish border, under Russian control by the Voyevod (or general commander) Mikhail Shein.  Sigismund’s army laid siege to the town in September of 1609, but the city would not fall until June of 1611, a total of 20 months.  It is very possible that Leslie took part in the siege first as a member of the Polish invasion.  The fall of Smolensk, however, did not lead to an end in the conflict.  Hostilities continued, and in 1616, Leslie’s garrison was taken prisoner near Smolensk by Russian forces.  As was rather common in such uncertain times, Leslie did what any other Scottish mercenary would have done; he switched sides.

Service in the Russian and Swedish Armies

Leslie started serving in the Russian Army in 1618, but left almost immediately to serve in the Swedish army in 1619.  Sweden and Russia were occasional allies and occasional foes during the Time of Troubles, but were both opposed to the Polish-Lithuanian Commonwealth; one of the ultimate Polish objectives in capturing the Russian throne was to convert Russia to Catholicism and then wage a holy war against Sweden (which had become protestant) for control of northern Europe and the Baltics. Polish King Sigismund III had laid claim to the Swedish throne already, and as such, an occasional, although uncomfortable, alliance of necessity was formed between Russia and Sweden.

In 1630, however, Leslie returned to Russia as part of a Swedish military mission. Once there, he managed to secure an audience with the new Tsar of Russia, Mikhail Fyodorovich Romanov, and asked permission to serve in the Russian army once more. Mikhail Fyodorovich granted his wish, and gave him his first assignment:  to return to Sweden and assemble a mercenary army to fight for Russia in the upcoming war to retake Smolensk.

The fall of Smolensk during the previous Polish-Muscovite war of 1605-1618 remained a sore loss for Russia, and the Tsar desperately wanted the city back. When Sigismund III died in 1632, Tsar Mikhail Fyodorovich used the opportunity to attack in an attempt to regain the lost city. Alexander Leslie held the rank of Colonel and commanded two regiments in the second siege of Smolensk; a mercenary regiment and a Russian regular regiment. Under the command of Mikhail Shein (the former Voyevod, or Smolensk garrison commander during the first siege), it is possible that perhaps Leslie was given this role due to his past experience serving in the Smolensk region; since he had served there with the Polish army, he would be useful in the attempt to regain the lost territory. The second siege of Smolensk lasted another two years, but was unsuccessful for the Russians. Shein capitulated in 1634, and Leslie’s regiment returned to Moscow, where the displeased Tsar dismantled Leslie’s mercenary regiment of foreigners, discharged them all from the Russian service, and ordered them all exiled from Russia.

After the inauguration of the new Tsar Aleksey Mikhailovich in 1645, discussions for reorganizing the Russian army along western lines were being hotly discussed, and in 1647, Alexander Leslie was once again recruited to the Russian service.  The new regiments were to be called Polky novovo stroya, or “regiments of new construction”, and it was the hope of the Tsar and his advisors that foreign soldiers in high positions in the Russian service could help re-organize the Russian armies to make them more effective in European combat.  However, there were certain members of the inner circle of the Russian nobility that were against foreign influences.

In the beginning of 1652, a meeting was held at the request of the Eastern Orthodox Church in order to take measures against what they claimed were offenses and disrespectful behavior on the part of several foreigners in Russia.  Leslie and other officers were accused of using crosses on top of various churches for target practice.  Leslie’s wife was accused of throwing a brick at a holy icon, and making her servants eat dog meat during Russian Lent.  While none of these incidents can be confirmed today, Leslie was arrested after the meeting, and the Tsar and his advisors attempted to resolve the conflict by asking Leslie and the other officers to convert to Russian Orthodoxy.  In September of that year, Leslie and many other officers agreed and converted.  Colonel Leslie took the Russian Orthodox name Avraam Ilyich, and as gift from the Tsar was promoted and given a reward of 23 thousand rubles.

In 1654, General Leslie participated in one last Smolensk campaign; this under the personal command of Tsar Aleksey Mikhailovich, and this time was successful.  Leslie commanded the siege himself, and after the city was finally retaken, Leslie was named the new Voyevod, or regional commander, of the city.

Leslie was the first foreigner in Russia’s history to hold the rank of general, and he continued in the Tsar’s service for a number of years, also participating in the siege of Riga in 1656.  Leslie would remain in Russia until the end of his days, raising his family there, and giving rise to a new branch of the Scottish Leslie Clan in a country on the other side of Europe.