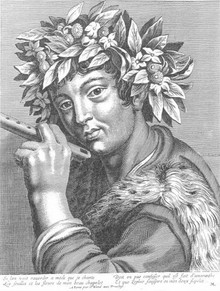 Jean-Baptiste Alexandre Le Blond was a French architect and Master Garden Planner who was made General architect of St. Petersburg in 1716.

Le Blond had many plans for the city of St. Petersburg, few of which were realized partially due to his conflicts with Mayor Aleksandr Menshikov of the city and partially because of the grandiose nature of his visions.  Le Blond would die unexpectedly of smallpox in 1719 at the age of 40, but even though his tenure as General-Architect was short, he still managed to leave his mark on the city of St. Petersburg.

The Russian victory over the Swedes at the Battle of Poltava on July 11th, 1709 signaled the beginning of the end for Sweden as dominant power in Northern Europe and allowed for the peaceful development of the city St. Petersburg.  As a result, Peter was finally allowed to search for civilian architects to start designing peaceful residencies for his cities, as opposed to the fortifying architects he had been forced to use while his cities were threatened by the Swedes.  Peter started a search for notable architects that would suit his ambitions, and in 1716, on yet another of his trips to Europe, Peter became interested in the work of the French architect Jean-Baptiste Alexandre Le Blond.  Le Blond had already achieved renown at 37 years of age with the publication of his book on the theory and principles of gardening, which had already been published in 12 different countries across the world.  Le Blond was offered a stipend of 5000 rubles a year, a residence, and the unique title of General-Architect to come to St. Petersburg.  Seduced by the grand possibilities before him on the banks of the river Neva, Le Blond moved to the French Quarter of St. Petersburg with his family and a group of French craftsmen in 1716.

Once in Petersburg, the new General-Architect got to work immediately.  He organized many workshops that would help him develop and design his new architectural ideas and teach the Russians the French methods of fabrication.  However, Le Blond’s plans for Petersburg were not always found acceptable, and often subject to criticism.  One of the first projects designed by Le Blond was his vision of a typical Petersburg residence: a two-story house split by seven equally spaced vertical axes (six windows and a door in the middle) with a high roof reminiscent of a French Hotel in the early Rococo style.  However, Peter’s reaction to the plans was not enthusiastic, but rather one critical of the oversights of the French architect.  He remarked that the windows were too big, and that the “Architect should be told to make the windows smaller, inasmuch as our climate is not French.”

Another grandiose project for Le Blond, and perhaps his most famous unrealized idea was the proposed reconstruction of St. Petersburg.  At the heart of the plan was a radical idea to make Vasilievsky Island the center of St. Petersburg, moving the political and market centers of the city to the island.  Le Blond thought the topography of the island would make for an ideally constructed city.  Le Blond’s plan called for the construction of several canals to be used for boat traffic, and used the canals in Amsterdam as an example.  Streets were to be built along strict, geometrically shaped lines, and a wall would be built around the center, which would have been ‘perfectly elliptical’ in design.  Within the walls would have been several fountains, squares, government buildings, market places, churches, and gardens.  Le Blond proposed moving the cemeteries and living quarters already there outside the center.  Le Blond envisioned what he thought would be the perfectly balanced city.

However, Le Blond’s plans were met again with criticism.  Peter was disappointed with the idea as a whole, and thought that Le Blond failed to take enough of the current construction of St. Petersburg into account; the Admiralty and the Summer Garden were in jeopardy of being moved or destroyed according to the plan.  The important role of the river Neva in St. Petersburg was also overlooked in the new design, and Peter felt that the plan was claustrophobic and would close off the city.  Parts of the plan were attempted, however, and preparations were made for the construction of several canals on Vasilievsky Island.  However, Le Blond’s ambitious designs would this time fall prey to his sour relationship with the mayor of St. Petersburg, Aleksandr  Menshikov.  Menshikov and Le Blond always had a tense relationship, and when Peter commanded his General-Architect to commence work on the canals and buildings that Peter had approved during another trip, Le Blond provided the specifications for the canals to be constructed to Menshikov.  However, the plans as provided by Menshikov to the workers, proved to be too narrow and unsuitable for large-scale use.  Furthermore, the official State government buildings that were designed and built were situated too close to private residences, representing a complete contradiction in the idea of the design as a whole.  When Peter returned and saw the results of the work completed in his absence, he asked his General-Architect, “And what are we to do with this?”  Le Blond’s answer was as succinct and exasperated as the Tsar’s. “Tear it down, Your Majesty, tear it down and build it again.”  The Tsar agreed, and the buildings were demolished.  Unfortunately, to rebuild them proved too expensive, and Le Blond saw yet another of his dreams vanish, never to be completed.

Not all of Le Blond’s projects were destined to end in failure, however.  In 1718, Le Blond designed the first oil-lamp project for the city of St. Petersburg.  Le Blond, however, would never see his lamps lit. The lamps would only be constructed one year after his unexpected death in 1719.  While many of Le Blond’s grand ideas proved too ambitious to be realized, the factories and French craftsmanship he introduced into Russia cemented his place as a leader in Russian architecture, and made his role pivotal in the development of one of Russia’s most beautiful cities.