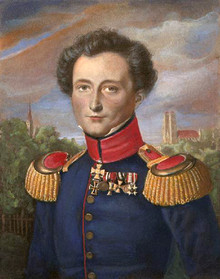 Carl Philipp Gottfried von Clausewitz was a German military strategist who served in the Prussian and Russian armies in their campaigns against Napoleon.  A philosopher as well as a writer and brilliant tactician, his literary work ‘On War’, published incomplete after his death continues to be one of the most studied and insightful sources on military and tactical thinking.  So powerful and encompassing are his ideas that the book remains required reading at many of the world’s top military schools today.  Among his most profound innovations in military thought are the concept of what we now call ‘the fog of war’, and perhaps his most famous quote on the definition of war: ‘War is…a political instrument, a continuation of political relations, a carrying out of the same by other means…"

Carl Phillipp Gottfried von Clausewitz (in some versions, Gottlieb) was born on June 1, 1780 in Burg bei Magdeburg, Kingdom of Prussia.  The Prussian army made up a majority of Prussian society at that time, and had a reputation of being one of the most elite and well-trained armies in the world.  So large was the role of the army that at one point, Prussian Government Minister Friedrich von Schrötter was quoted as saying that "Prussia was not a country with an army, but an army with a country".  Virtually all citizens of Prussia aided or served the army in one way or another.  Clausewitz entered the army at age 12 with the rank of lance-corporal, and served with the army at age 13 when the Prussians declared war with France during the French Revolutionary War in 1793.  He later served with the Prussian Army in the Napoleonic Wars in 1806, and participated in the Jena Campaign.  He was captured by Napoleon along with 25,000 other Prussian soldiers in the fateful Battle of Jena-Auerstedt on October 14, 1806, the day when the Prussian army was decisively defeated by Napoleon.  He was 26 at the time.  Prussia was later forced to sign the treaty of Tilsit with Napoleon on July 9th, 1807, which effectively handed Prussia its crippling defeat in writing: The Kingdom of Prussia was forced into an alliance with France and at the same time reduced to half its original size.

There is an interesting legend that was widely spread during the 19th century concerning the uncanny military abilities of Clausewitz even at that early age.  According to the legend, Clausewitz was against the positions of the Prussian army before the fateful battle at Jena, and drew a battle-map for his commanders that demonstrated how to defeat Napoleon’s army.  After the battle, the plans were presented to Napoleon as a trophy.  Looking at them, Napoleon apparently frowned, saying “what luck that I didn’t have to do battle with this terrifying man.  I would have been destroyed without doubt!” There is, however, no official confirmation of this legend, although it was widespread in Germany during both World Wars as an example of German superiority.

Clausewitz was opposed to the forced alliance between France and Prussia, and left the Prussian army to join the Russian army in 1812 during the Russian campaign against Napoleon.  He joined the Russian-German legion in 1813, and participated in the battle of Waterloo as a chief of staff, aiding in the final, crushing blow to Napoleon’s army in 1815.

The German Military Academy, and Clausewitz’s philosophy of war. 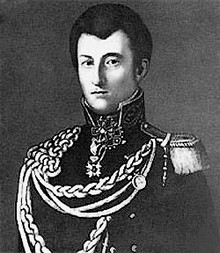 Clausewitz was appointed the director of the German Military Academy (where he himself had studied) in 1818, and held the post almost until his death.  Having studied the philosophy of Immanuel Kant earlier as a student, it was here as director of the academy that he would try to assemble what would ultimately be his legacy, his collected writings on the philosophy of war.  However, his early death in 1831 caused the work to be published posthumously by his widow, leaving scholars to debate how close the work was to being complete and argue over several of his theories.  In spite of the surrounding debates, there are still several modern concepts and definitions in warfare that are directly derived or accepted as standards based on his work. Among these are the concept of ‘the fog of war’, a term that has come to represent the general uncertainty and lack of good intelligence in the field.  "Many intelligence reports in war are contradictory; even more are false, and most are uncertain. ... In short, most intelligence is false,” he is quoted as saying.

Perhaps his most important contribution to the philosophy of war was his quote concerning the definition of war itself:  That “war is…a political instrument, a continuation of political relations, a carrying out of the same by other means…We deliberately use the phrase…“other means" because we also want to make it clear that war in itself does not suspend political intercourse or change it into something entirely different…How could it be otherwise? Do political relations between peoples and between their governments stop when diplomatic notes are no longer exchanged? Is war not just another expression of their thoughts, another form of speech or writing? Its grammar, indeed, may be its own, but not its logic.”

Although some argue that development of technology in the 20th century has made Clausewitz’s theories obsolete, they are still taught in many of the top military universities of the world, his quotations finding their way into films and fiction to this day.  His ideas of strategy and battle theory have even been adapted into business theory.  “Tomorrow is determined today,” he wrote, “the future is created in the present; in that moment that you pine pointlessly for the future, it is already deformed as it leaves your lazy hands. Time is yours, and whatever comes of it depends on you.”