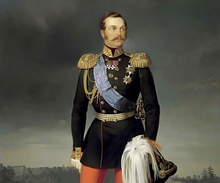 Alexander, the eldest son of Tsar Nicholas I , was born in Moscow on April 29, 1818. From the early age the boy was reared for the throne. Tutored by a poet and literary critic Vasily Zhukovsky, the young heir apparent received a broad and thorough education, from arts and languages to sciences and rigorous military training. To complete his schooling at the age of 19 he embarked on an extensive tour of Russia and Europe. During his European travels Alexander met his future wife, Princess Marie of Hesse. The couple married in 1841 and had 8 children.

Alexander became Tsar on the death of Nicholas I in 1855, aged 36, already a mature and experienced statesman. From his father, Alexander inherited a bloody Crimean War with a coalition of the Turkey-led Ottoman Empire, Britain and France. Russia’s serf-based economy couldn’t support the cost of warfare, the loss of life was tremendous and a year on the Tsar began peace talks. The Treaty of Paris ended the bloodshed but Russia lost its dominance in the Balkans and its warships were banned from the Black Sea.

A painful feeling of failure was widespread. Alexander felt the time was ripe for reforms. Censorship was relaxed, new education programmes drafted, independent press flourished. But the Tsar realised he had to go far beyond that. The war proved Russia was no longer a great military power and couldn’t compete with industrialised European nations.

Alexander now began to think of bringing an end to serfdom – an immense task advocated by many liberal intellectuals but fiercely opposed by landowners. But he pushed ahead with the reform and in 1861 Russia became one of the last countries in Europe to shake off serfdom.

The emancipation law itself was an enormously long document of nearly 400 pages. Trying to balance the interests of both the proprietors and the peasants, it stated that Russia’s 22 million serfs were now free but didn’t make them land owners. Instead, they had to buy or rent the land from their former masters. In the end, few were pleased. For the nobles, the step was unwelcome, for the peasants the long-awaited freedom brought disappointment. The land was often priced higher than its real value and millions found themselves in hopeless poverty and debt.

Still, the change spurred other innovations – education and judicial reforms followed, an elaborate scheme of local self-government in large towns and rural districts was set up. The economy was boosted, railway construction boomed, trade soared, banks and factories sprang up across the country.

But together with political openness the Empire saw the rise of the nationalistic movements. In 1863 the so-called January Uprising flared up in Poland. It was suppressed after eighteen months of fighting, thousands of Poles were executed or deported to Siberia, many estates were confiscated and a much tighter Russian control over Poland was imposed.

Meanwhile, on the international arena Russia’s weight was at an all-time low. Remembering the embarrassment of the Crimean War, Alexander dreamt of restoring his country’s status and influence. Military spending sky-rocketed but the army was restructured and rearmed to fit European standards. And the Tsar soon got the chance to test his brand new military might against the power that dealt him a humiliating defeat two decades earlier. 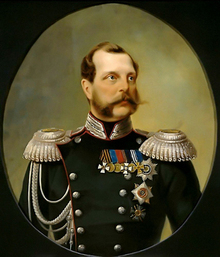 It was Bulgaria, at the time a part of the Ottoman Empire that propelled Russia to war. In 1876 a Bulgarian revolt against the Turks was brutally crushed causing a public outcry in Russia. Alexander was reluctant to fight but saw himself as champion of the oppressed Orthodox Christians and declared the war the next year. It took him another year to win – 200,000 Russian soldiers were killed, but after 500 years of Turkish rule Bulgaria was back on the map. The country still remembers Alexander II as the Liberator Tsar and one of its founding fathers.

But after a military triumph Russia faced a devastating diplomatic defeat. The Tsar initially dictated the terms of the peace settlement. The Ottoman Empire conceded the creation of a large Bulgarian state. But many European powers, most of all England and Austria-Hungary, anxious about Russia’s increasing influence gathered in Berlin calling for another treaty. Not able to afford another war, Alexander could only watch as much of his efforts were erased. He later called it one of the darkest pages of Russian diplomacy.

The war took its toll on Alexander. His interest in politics weakened, he felt exhausted and sought refuge in his private life. By that time he had embarked on the greatest and last love-affair of his life – a passionate romance with Princess Catherine Dolgorukova. Their 14-year-long relationship began in the summer of 1866. The love between a 47-year-old Emperor and an 18-year-old schoolgirl was condemned by the court and the royal family but it didn’t stop Alexander. His wife’s health was failing and in 1880, less than a month after her death, Alexander married his long-time mistress. By that time Catherine had bore him four children. But their morganatic union proved short-lived.

Alexander’s reforms were drawing more and more criticism. For some his extraordinary efforts to change his country were too much while others believed he didn’t go far enough. Alexander became a victim of numerous murder plots – one dramatic assassination attempt followed another.

In February 1880 Alexander announced that he was considering granting the Russian people a constitution. But the plan never went ahead. On March 13, 1881 the Tsar’s carriage was bombed in the streets of St. Petersburg by members of a revolutionary organisation People’s Will. He emerged shaken but unhurt and wanted to see the site of the explosion and check on the wounded Cossacks that accompanied him. As he made his way over, another terrorist threw his bomb. Fatally wounded, Alexander died an hour later.

A reformer, a warrior, a diplomat and a man of tragic fate, Alexander II has gone down into history as the Liberator Tsar.