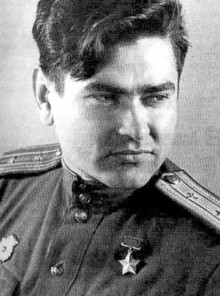 “The Story of a Real Man” is a novel, which was later made into a feature film, about a pilot who returns to the battlefield after having his legs amputated. During the last years of WWII he became a fighter ace and a great threat to the Luftwaffe (the Nazi Air Force). The plot is based on a true story, which is implied in the title of the novel. The word “real” in Russian, however, is also used to describe a person who lives his life in full swing no matter what the circumstances.

Aleksey Petrovich Maresyev was born in 1916 in the city of Kamyshin on the banks of the Volga River. The city was tiny – the main pastimes for teenagers there were walks along the river banks and the occasional movie on display at the local theater. At the time the Soviet government encouraged young people to join amateur aviation and parachute clubs. Young Aleksey was stricken by one of the show reels about aviation – he was determined that one day he would fly as well.

He attended a vocational school and became a professional turner. He wanted to join the army immediately but the Kamyshin Branch of the Communist Party received an order from Moscow to send one of their best students to the Far East to participate in the construction of the new city, Komsomolsk-on-Amur. Aleksey did not want to go but many of his teachers warned him that if he refused, his future career would be ruined. One of the doctors finally convinced Maresyev by telling him: “If you go, your blood circulation will be much better and you will have no problems to try aviation later on.” Aleksey agreed.

In 1937, after the work in the Far East, he joined the Red Army. He served in the border patrol aviation unit as a technician – but all he did, according to Maresyev, “was put the tail of the plane into the proper parking position.” A year and a half later he was sent to a pilot school in the city of Bataisk in the south of Russia. It was there that Aleksey Maresyev earned his wings. He graduated from the Military School of Aviation in 1940 – one year before the USSR entered WWII.

Some military historians call the young Soviet pilots of the time “kamikazes,” the Japanese term meaning “death pilots.” The reason was simple – the Soviet I-16 fighter plane could not compete with the technically superior German warplanes. The I-16 was the plane in which Aleksey Maresyev made his first flight as a fighter pilot in August 1941, in Central Ukraine. He managed to adapt to all the hardships of military service and by the spring of the next year he had already shot down four Luftwaffe aces.

The heroic deed of survival 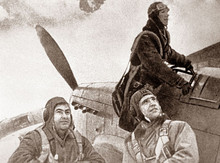 To the extreme left - Aleksey Maresyev

In April 1942 Maresyev got into fight with two Nazi warplanes. They pressed him so hard that he could not get out of the trap - his plane was downed in a forest near the city of Staraya Russa in the northwest of the country – a territory that was occupied by the Nazis at the time.

Aleksey tried to land the plane on the ice of a small lake but failed; still, he miraculously survived. His plane crashed into the snow, which softened the landing. With several bleeding wounds, he crawled through the dense Russian forest for 18 days until he reached safety in the village of Plavni.

The members of the peasant family who first saw him got really scared. Aleksey could not answer any of their questions. They took him in and managed to bring him back to life even though there was no doctor in the village. A week after the tragedy a Soviet plane landed near the village. Aleksey was taken to hospital.

By that time, however, Maresyev’s injuries had deteriorated: the amputation of both legs was the only way to save Aleksey’s life. Right after the amputation, when he was still feeling great pain under his knees, he read a newspaper story about the Russian pilot Prokofyev-Seversky who had lost a foot, but still managed to continue flying. Aleksey decided that he would also fly again.

He spent a year learning how to use his prosthetic devices. Struggling through the pain, he finally learned to walk and even dance. Few people could tell at first that Maresyev had no legs at all. Even the doctors at the military commission did not spot his artificial limbs. They were surprised when they found out about Maresyev’s bravery and gave him a nod on his request to resume flying.

He returned to the 63rd squadron, but the commander there was cautious about Aleksey. For two months Alexey was only allowed to perform test tasks over Central Russia, together with the commander. Finally, he was allowed to “go solo.” During one of his first flights he downed three FW-190 Luftwaffe planes. All together, Maresyev completed 86 combat flights and downed 11 Nazi planes.

On August 24, 1943 Aleksey was decorated with the Golden Star of the “Hero of the Soviet Union,” the highest military award of the USSR. His popularity began to grow and more people wanted to meet him. Among them was a war correspondent for the Pravda newspaper, Boris Polevoy. His meeting with Aleksey inspired him to write his "Story of a real man". Following the war, the story was made into a feature film of the same name. After seeing the film many people had a problem when they saw the real Aleksey Maresyev – they confused him with the actor Pavel Kadochnikov who brilliantly played Maresyev's part. 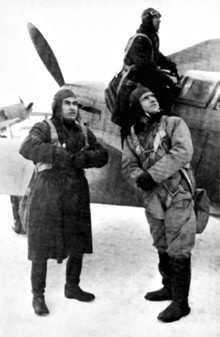 Maresyev is to the left

Both in the novel and in the film Polevoy altered Maresyev’s biography. Aleksey’s surname was slightly changed – it became “Meresyev” – to allow the author to build up tension and suspense to the original plot. The name of Prokofyev-Seversky was replaced too. In real life this pilot left for the United States and became an aviation constructor. The book and the film became an example for several generations of schoolchildren all over the country. One of the key moments in the film was Meresyev’s dance in front of the doctors who couldn’t help asking, “How do you do it?” Meresyev replied, “Well, I m a Soviet man, after all!”

Maresyev himself kept insisting that the fuss around his name was too big. He said in one newspaper interview, “There's nothing extraordinary in what I have done. The fact that I've been turned into a legend irritates me.”

In 1994 he was relieved of flying and became an instructor for the younger pilots. He resigned from military duty in 1946 and spent the rest of his life helping his fellow combat soldiers. In 1956 Aleksey Maresyev was elected Secretary and in 1983 Chairman of the Soviet War Veterans Committee. His job was to provide assistance to all those who participated in combat actions and damaged their health. He was also a member of the USSR Supreme Soviet – the parliament of the country. He is the author of a book about the Battle of Kursk, one of the key episodes of WWII.

On May 19, 2001, on the eve of Aleksey Maresyev's 85th birthday celebration, hundreds of people gathered in the Central Russian Army Theater to congratulate their hero. They never saw Maresyev again – early in the morning he was taken to a Moscow hospital with heart troubles. An hour and a half before the ceremony he died. Elderly veterans wept at the news. The Russian Armed Forces orchestra stood for a moment of silence onstage in the last tribute to “The Real Man.”