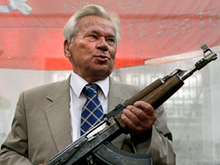 
Few people can enjoy their name being turned into a worldwide brand thanks to one single product. One of them is Mikhail Kalashnikov, designer of the immensely popular assault rifle named after him. African children are given name Kalash after the weapon, and its image is featured on two nation’s flags and as the insignia of countless paramilitary groups.

A popular legend claims that, at the peak of the Cold War, NATO intelligence believed Kalashnikov to be a cover name for a big secret workshop with dozens of engineers rather than a real man.

Such myths and vivid exaggerations surround both Kalashnikov’s bio and the story of his invention. Admirers say the AK-47 was a Wunderwaffe (wonder weapon) and had no equal in its lifetime.

Critics claim Kalashnikov’s contribution to creating the assault rifle was mediocre at best, and his name was given to the weapon as a piece of Soviet propaganda because his family were peasants, while all the real work was done by the more experienced engineers on his team.

Finding his way into weapon mechanics

What is known for sure is that, after Mikhail Kalashnikov was conscripted into the Army in 1938 and became a tank driver, he suggested several improvements both for tank construction and for small arms used by crews. At least one invention was important enough to have him report it to the head of the military command and be sent to a tank factory for education and work on his device. 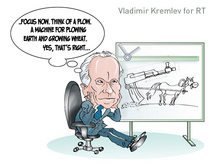 His first original weapon design dates back to 1941. Kalashnikov was wounded in battle and was in hospital. In his spare time he created a sub-machine gun, which was never given the green light, but allowed him to win a position among weapon mechanics working for the Soviet military.

In 1943 the Soviet Union accepted a standard for a so-called intermediate-power 7.62mm cartridge, which was in-between pistol and rifle ammunition in terms of the stopping power and potential range of the weapons, which would use them.

Designers started work on a small arm to replace submachine guns (SMGs) on the battlefield, which would combine automatic mode of fire, a greater range than that of an SMG and a moderate weight. Kalashnikov’s first attempts in this direction lead to the creation of an unsuccessful automatic carbine in 1944, and one year later he started working on what later became the Kalashnikov rifle. 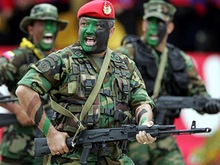 The AK-47, so-named after its constructor and year of creation, is, of course, far from being the ideal weapon - otherwise all armies of the world would be using it. In comparison with contemporary models, it lacked accuracy, had powerful recoil, was noisy and had the notorious tendency to lift its barrel during shooting.

But it was cheap to produce, very reliable in the field and was so simple in construction that it only took a couple of days to teach even the dumbest boy from a backward Siberian village to service and use it.

For a huge country with a largely illiterate population it was the best-available bargain, and became the standard weapon for all branches of the armed forces. This also made the Kalashnikov rifle very popular in the third world among militants, terrorists and rebels of all sorts.

Mikhail Kalashnikov says it was war that made him a constructor of weapons, and that in a peaceful world he would probably have made agricultural machinery. Still, knowing that his creation took countless lives, he sleeps well, because all his life he served his country, and did it well.

More than a gun

His design workshop gave life to a whole family of small arms, ranging from light machine guns to an underwater rifle to a sniper rifle. The total number of models and modifications is over a hundred. Kalashnikov is also a popular brand-name for knives and vodka, among other things.

The veteran weapon-master, who is over 90, is fond of classical music. However his real hobby is designing hunter carbines. He and his team were even given a state award for artistic achievements for the line.