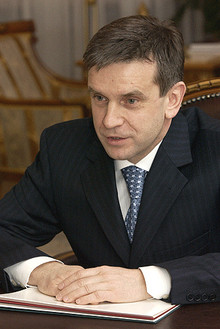 Russian Ambassador to Ukraine, and Russia's former Minister of Health and Social Development. Founder of the MAKS insurance company.

Mikhail Zurabov was born in Leningrad (now St. Petersburg) on October 3, 1953, to a family of civil servants. His father Yury Zurabov was a senior official of the USSR’s Ministry of Marine Fleet. His mother Engelina Zurabova had a PhD in biological sciences.

The future Minister graduated from school in 1970 and enrolled in the Leningrad Institute of Water Transport, but transferred in 1971 to the Faculty of Economic Cybernetics at the Moscow Institute of Management. Zurabov graduated in 1975, and worked at the institute from 1975 to 1978.

In 1982 he successfully defended his doctoral thesis. From 1983 to 1988, Zurabov served as a senior research assistant for mounting technology at the Scientific Research and Design Institute.

His academic record earned him an appointment as deputy chief of the Mospromtehmontazh trust, a major industrial construction company, in 1988, where he served until 1992. The company would become one of the major shareholders of the Moscow Insurance Company MAKS, established in 1992.  Zurabov headed MAKS till 1998.

From November 1998 to May 1999, Zurabov served as an advisor on social issues to President Boris Yeltsin. Zurabov was then appointed chairman of the Pension Fund in 2000, and pension reform was initiated in 2002 under his direct supervision.

The reform was a complete failure. An estimated 98 percent of Russian citizens didn’t buy in to the new pension system. The mistakes made by Mikhail Zurabov’s ministry were evident to everybody, including him. He admitted that strategies for reform must be reconsidered.

Zurabov was reappointed Minister of Health and Social Development on March 9, 2004, in Mikhail Fradkov's government. While holding the post, Zurabov enacted a number of social reforms that sparked national controversy.

Zurabov was one of the prime movers of a reform scheme that consisted of replacing social security benefits with cash payouts. The so-called ‘monetization’ was highly controversial. The sums paid out were not commensurate to the benefits lost in exchange. In the first few months of 2005, a number of rallies took place across the country. It was later admitted by the government that the reform failed, and was left unfinished.

Zurabov was repeatedly accused by the media of lobbying for the interests of different insurance and medical companies.

Policies enacted by Zurabov in 2007 prompted strong criticism from the members of the State Duma. He was accused of improperly implementing the program that replaced social security with cash payments. Zurabov’s main critic in parliament was the Communist Party of the Russian Federation (CPRF), and its leader Gennady Zyuganov.

On April 4, 2007, State Duma members declared Mikhail Zurabov’s performance as a minster unsatisfactory. Some members of Parliament proposed the Ministry be divided into two specialized Ministries: the Ministry of Public Health and the Ministry of Social Development. The proposal failed to pass the State Duma.

On September 12, 2007 Zurabov became acting Minister of Health and Social Development, over the fact that Prime Minister Fradkov asked President Vladimir Putin for a resignation of his cabinet. After Prime Minister Viktor Zubkov was appointed, Zurabov was not re-appointed to his post.

While holding his so-called ‘social minister’ post invoked, Zurabov was roundly criticized by many citizens. He also became an object of fierce ridicule and hatred in many business sectors, including medicine suppliers.

In 2007, Zurabov became an advisor to President Vladimir Putin. The appointment was kept secret for some time, due to Zubarov’s wide unpopularity. In the wake of the election of Russian President Dmitry Medvedev, Zurabov was reappointed to his post of Advisor to the President of Russia.

On June 22, 2009, it was reported in the media that Mikhail Zurabov would be tapped to succeed Viktor Chernomyrdin as Russia’s ambassador to Ukraine. The appointment was confirmed two days later. The following day, the State Duma received documents for Zurabov’s consideration for the post.

Mikhail Zurabov was considered to be a strange choice by the political establishment for ambassador to Ukraine. Political relations with Ukraine were considered to be outside of Zurabov’s expertise, since he lacked any diplomatic experience.

The Communist Party strong criticized and opposed the decision to name him ambassador. Nevertheless, his candidacy was approved on August 5, 2009. On August 11, President Medvedev sent a letter to his Ukrainian counterpart stating that during the years of Viktor Yushchenko’s presidency, relations between the two countries had shifted from their original principles of friendship and partnership. President Medvedev said a decision had been made not to send the ambassador until relations thawed.

Zurabov was put on ice until January 19, 2010, when he received an order from the President to begin his diplomatic duties. It was clear by that time that Yushchenko would not be re-elected for a second term. Zurabov currently holds his ambassadorial post in Kiev.

Zurabov is married to Julia Zurabova, a business executive. She runs her own company: a dealership for medicine and medical equipment. The couple has three children.