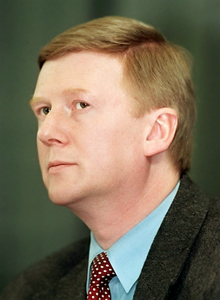 Anatoly Chubais is cursed as much as credited for the rapid and severe privatization of Russian state assets in the early 1990s, part of a “shock therapy” to introduce market capitalism to the former Soviet Union. His efforts earned him an assassination attempt and public contempt, as well as an assured place among the captains of Russian industry.

Anatoly Borisovich Chubais was born on 16 June 1955, in Borisov in the Belorussian Soviet Socialist Republic, now Belarus. His father was a retired colonel and World War Two veteran, who lectured in Philosophy and Marxist Theory. His mother was an economist by profession, though she stayed at home after she had children and never put her training into practice.

Chubais graduated in 1977 from the Leningrad (now St. Petersburg) Institute of Economics and Engineering. After further studies he was awarded a Ph.D. in Economics and began to lecture. He continued to work at his alma mater until 1990.

The 1980s were turbulent years in Russia, as the policy of Glasnost or “Openness and Transparency” introduced by Mikhail Gorbachev brought many new topics of discussion into the open. The future of the Soviet Union’s economy was the focus of hot debate. In St. Petersburg Chubais was part of a circle of liberal reformists who argued that a planned economy like the Soviet one could never reliably satisfy consumer demand. He founded the “Perestroika” Club in 1987 as a meeting place of like-minded reformists.

In 1980 Chubais joined the Communist Party. However Chubais’s views on economics were a long way from those of his father who lectured on Scientific Communism. Chubais became a public figure in the wake of the Soviet system and, like many card-carrying party members at the time, was a communist only in name, and subsequently dropped all connections with the party in his political life.

Chubais’s rise to the highest echelons of government power in the young Russian Federation was meteoric. In 1991 he became the Chief Economic Advisor to the mayor of St. Petersburg, Anatoly Sobchak. Later that year he was appointed chairman of Goskomimushchestvo, the state body charged with privatizing public property. The next year he was made Minister for Privatization in the government of Prime Minister Yegor Gaidar.

Chubais dismissed the idea of selling off state assets to the highest bidder as it was feared foreigners and local crime lords would quickly seize control. He favored a system where each citizen of the Russian Federation was given an individual voucher, which was essentially a share in a company. These vouchers could be sold or transferred. The result was that a small number of well-connected entrepreneurs bought vast numbers of these vouchers for well below their real value. They often advertised their service as an “investment” and promised to pay dividends on the vouchers, but in most cases the dividends never materialized.

When asked to name their most hated countryman, many Russians would indicate Chubais. He is blamed for creating the system of oligarchs, and impoverishing millions as a result of his economic reforms. But foreign advisors have praised his “shock therapy” approach, which assured the creation of a capitalist market economy, however painful it might have been for ordinary people.

From 1994 to 1996, Chubais was an elected member of the State Duma (parliament) and a member of the Russian Choice bloc, which supported Boris Yeltsin. As a deputy he was actively engaged in privatization projects. He ran Yeltsin’s successful presidential campaign in 1996 and became the Chief of Staff after the election.

In the government of Prime Minister Viktor Chernomydrin, Chubais served as Deputy Prime Minster as well as Finance Minister. He led reforms of the tax and pension system. Chubais was dismissed as Finance Minister in November 1997, much to the relief of many victims of “voucher privatization.” When Chernomydrin was unexpectedly dismissed in March 1998, Chubais also lost the post of Deputy Prime Minister. When asked about the failure of privatization, Yeltsin is reported to have exclaimed, “It’s all Chubais’s fault!” The phrase became a popular a slogan on t-shirts and made Chubais the butt of many jokes.

With that, Chubais left executive politics and dedicated himself to business. He served as head of RAO UES, the Russian state electricity company from 1998 until its eventual break-up and privatization in 2008. 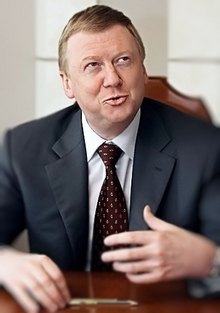 A dramatic blackout in the Russian capital on 25 May 2005, while Chubais headed the electricity conglomerate, did little to help his popularity. The city was paralyzed and underground trains were stalled for several hours. Whenever there is a blackout, Russians now quip, “Chubais paid a visit!” The former Finance Minister has taken his new status as national laughing stock in stride – he maintains a collection of “Chubais jokes” on his own website.

A roadside bomb, followed by a rally of gunfire, was aimed at Chubais’s car in 2005, but the assassination attempt was a failure and he was unharmed. Three individuals, including Vladimir Kvachkov, a colonel in the Russian Foreign Intelligence Service, were tried for the plot, but later acquitted. Kvachkov ran for parliamentary office while in prison and won 44,000 votes, though it was not sufficient for election. The investigation into the assassination attempt is still ongoing.

UES was privatized and broken up into smaller entities in 2008. Russian president Dmitry Medvedev then appointed Chubais as director-general of the state nanotechnology company, Rusnano - part of the Kremlin’s strategy to find alternatives to fossil fuels. He set a target for Russian nanotechnology sales of 1 trillion rubles by 2015. Chubais is also a vocal promoter of hydroelectricity for Russia.

Chubais was honored with a Presidential Commendation in 2008 for his part in drafting the Russian Constitution, and for his contribution to democracy in the country. Since September 2008 he has been a member of the advisory body of financial services giant JPMorgan Chase & Co.

In January 2012, Anatoly Chubais tied the knot with Russian screenwriter and TV presenter Dunya Smirnova. It is Chubais’s third marriage. He has two children – a son, Aleksey, and a daughter, Olga, both from his first marriage.