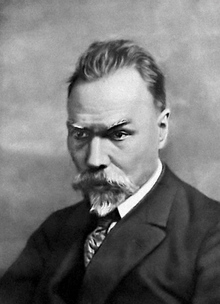 The poet Vladyslav Khodasevich once said about Valery Bryusov: “He believed himself to be the captain of a literary ship.”

Bryusov is considered to be one of the founders of Russian symbolism. He was a poet, a writer, a scholar, a polyglot and a publisher.

Maxim Gorky called Bryusov “the most refined intellectual” of all Russian writers of his time. Bryusov was the leader of Russian symbolism during the cultural revival known as the Silver Age along with such authors as Konstantin Balmont, Aleksandr Blok, Vyacheslav Ivanov, Andrey Bely, Dmitry Merezhkovsky and others. Bryusov's collection of poetry “Venok” (“The Wreath”) is among the highest achievements in Russian literature.

Bryusov was born in Moscow, Russia. His grandfather, Aleksandr Bakulin, was a poet, and his father, Yakov Bryusov, a wealthy merchant who also published his poems and stories. Young Bryusov grew up in a trilingual

environment. He spoke French and German and, of course, Russian. He received an 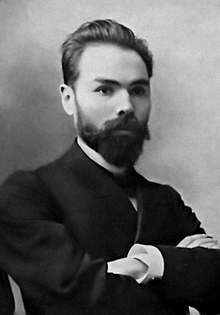 excellent private education. From 1885 to 1893 he studied in private gymnasiums and acted in several school plays. At that time Bryusov was romantically involved with a young and beautiful woman, Elena Kraskova. Her sudden death in 1893 caused him an emotional trauma, and Bryusov tried to find a cure in writing. In 1893 he wrote his first drama, “The Decadents (End of a Century).” At the same time, in a letter to Paul Verlaine, the French representative of symbolism, Bryusov referred to himself as the founder of symbolism in Russia. Symbolism was a late 19th century art movement of French and Belgian origin in poetry and other arts. The label “symbolist” itself comes from the critic Jean Moréas, who coined it in order to distinguish the symbolists from the related decadent movement in literature and art. Symbolists believed that art should aim to capture more absolute truths, which could only be achieved indirectly. Thus, they wrote in a highly metaphorical and suggestive manner, endowing particular images or objects with symbolic meaning.

Bryusov was for years the leader of the symbolist movement. The symbolists saw art as a way to approach a higher reality. The writer was also instrumental in introducing Western works to Russian audiences through his translations of Charles Baudelaire. He also edited the important symbolist 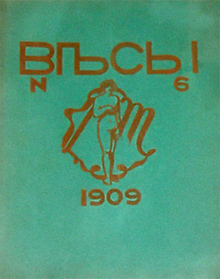 magazine “Vesy” (“The Scales”), which was modeled after a similar French publication and showcased the works of Russian writers alongside European symbolists. In 1892 three collections of verse were published under the title “The Russian Symbolists.” Rejecting positivism and materialism as well as the classic approach to literature, Bryusov followed the example of his Western counterparts. He experimented with literary form and valued suggestion, intuition and musicality in his work.

From 1892-1899 Bryusov studied history and literature at Moscow University. After graduating in 1899, Bryusov joined the Moscow Literary Artistic Society, which was the center of the new styles and trends emerging at the turn of the 20th century. Bryusov himself tried a variety of styles in his numerous poems, but his best achievements belong to symbolism. His poetry ranged from sophisticated eroticism to mythology, legends and epic subjects.

the True Story.” Set in 16th-century Germany, it tells the story of a devil who appears in disguise before a girl and tempts her into committing various sins. The introduction in “Vesy” explained that an old manuscript had been given to the editorial board by a collector and was translated into Russian. The publication evoked great interest and was soon translated into foreign languages. The mystery of the authorship did not take long to unravel. The ambiguity was set up by Valery Bryusov, whose remarkable skills and erudition made it possible for the pubic to grasp the bleak era of the Inquisition. The trick was done so professionally that German literary critics did not believe the author was their contemporary - and a Russian. They wanted the name of the collector and they wanted to study the manuscript. This gloomy, sensual book had its origins in a real-life love triangle between Bryusov, poet Nina Petrovskaya and poet Andrey Bely. It was adapted into an eponymous opera by Sergey Prokofiev in 1927.

After the book of Bryusov's poems called “To the City and World” came out in 1903 poet Aleksandr Blok wrote, “The book teases, lures and embraces. I will be reading it for a long time, and I'm happy I haven't read it all yet, haven't smoothed out all the pages, haven't permeated my heart with all the commas.”

Bryusov found inspiration in the works of Virgil, a Roman epic poet, and Vassily Zhukovsky, a Russian poet of the first half of the 19th century. But his main inspiration was Aleksandr Pushkin. Bryusov was the author of eighty-two articles about Pushkin and edited Pushkin's letters and documents connected with his work. 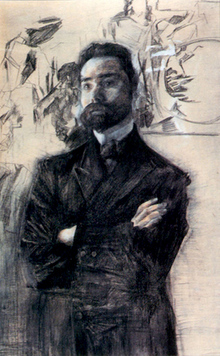 The atmosphere of the first Russian revolution of 1905-1907 had a great impact on Bryusov’s poetry. His books of that period reflect the heightened social activity of the author, who welcomed the tornado of the revolution.

The pleasure of literature

In 1899 Sergey Polyakov invited Bryusov to participate in the founding of the Scorpio Publishing House. In addition to publishing the works of leading symbolists, the Scorpio Publishing House in 1904 sponsored the literary journal “Vesy.” By 1906 Bryusov became increasingly critical of writers and poets who tended to indulge in excessive “mystical anarchism,” among them the second wave of symbolists, especially those involved with the journal “Zolotoye runo” (“The Golden Fleece”).

Bryusov's metaphoric language became even sharper and more passionate. He described himself as a “slave of bourgeois culture” but was still hopelessly addicted to the pleasures of his hedonistic and “classy” lifestyle. In such poems as “Kamenshchik” (“The Mason”), “Umirayushchii Koster” (Dying Fire) and his book of prose “Zemnaya Os” (“The Earth's Axis”), Bryusov pictured various ways out of the traps of civilization, from going back to nature and an organic way of life to steering through the revolutionary changes of decadent society.

In real life Bryusov became a military correspondent during the World War I. After witnessing the cruel realities of war and death he suffered a nervous breakdown. His novel “Gora Zvezdy” (“Star's Mountain”), stories “Vosstanie Mashin” (“Uprising of Machines”) and “Myatezh Mashin” (“Revolt of Machines”) show his departure from the illusionary world of pure symbolism. 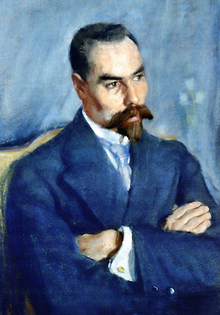 In the 1910s Bryusov continued to work in all aspects of artistic culture, writing plays and a novel and engaging in literary criticism and poetic debates with the Futurists. In 1913 Bryusov wrote a book of poems under the pseudonym Nelli, narrating the ironic life story of a tragic poet in the form of experimental, Futurist-inspired poems. The ironic mystification was met with consternation and derision by the Futurists.

Bryusov was an enthusiastic supporter of the October Revolution of 1917. He believed it to be a transformative historic event. Bryusov became a member of the Communist Party in 1920 and was active in the People's Commissariat for Education, serving as head of its printing and library divisions. He was the head of Moscow Public Libraries under Commissar Anatoly Lunacharsky. In 1919 Bryusov was recommended to join the Communist Party, a recommendation he could not refuse given the current dictatorship. From 1919 till 1921 he was Chairman of the Union of Poets, then in 1921 he became Director of the Moscow Institute of Literature and Arts until he died. Bryusov edited the first edition of the Soviet Encyclopedia. He made definitive translations of works by Edgar Allan Poe, Emile Verhaeren, Maurice Maeterlinck, Paul Verlaine, Romain Rolland, Victor Hugo, Lord George Byron and Oscar Wilde. Bryusov's complete translations of “Dr. Faust” by Johann Wolfgang Goethe and “Aeneid” by Virgil are among the highest achievements in literary translation.

Bryusov also revealed the beauty of Armenian poetry in his numerous translations. He published a comprehensive book “Poetry of Armenia,” a fundamental collection of Armenian poetry. For his Russian translation of the Armenian folk epic “David of Sasuntsi,” depicting the Armenian national hero, Bryusov was designated People's Poet of Armenia in 1923. The Yerevan State Linguistic University is named after Valery Bryusov. Bryusov played a significant role in the popularization of Armenian poetry at the time of the terrible ordeals of 1915 when the Armenians were on the verge of extermination due to the deliberate and systematic destruction (genocide) of the Armenian population of the Ottoman Empire during and just after World War I . It was characterized by massacres, and deportations involving forced marches under conditions designed to lead to the death of the deportees, with the total number of Armenian deaths estimated at one and one a half million.

Soviet reality and a poet-anarchist 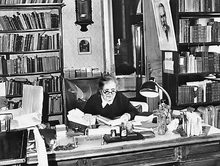 Valery Bryusov eventually came to disillusionment with the Soviet reality after witnessing the rapid degradation of culture under Communist rule. Since the 1900s Bryusov indirectly opposed Lenin and wrote that the October Revolution causes destruction but fails to create a better world; in return Lenin labeled Bryusov a “poet-anarchist.” During 1920-1924, when many of his friends emigrated, Bryusov wrote that he was torn between his naive hopes in the just revolution, and the Russian Revolution that had caused terrible losses and destruction, but did not keep the promise of social justice and freedom. The unfolding drama of totalitarian dictatorship and the grim reality of Communism resulted in Bryusov’s depression and a serious illness. He was found dead of pneumonia at the age of 50 in his Moscow apartment and was laid to rest in Novodevichy Cemetery in Moscow.

His wife Zhanna Bryusova, of Czech origin, preserved his personal belongings, library, pictures and engravings for years in the hope that the old house would be revived. Eventually it was turned into “The Museum of the Silver Age,” which continues to grow, with plans to organize various exhibitions, open a lecture-hall and hold concerts.

Fierce birds, with feathers made of pure fire,
Flew above the entrance into God's Empire.
The inflamed reflections reached the marble whiteness,
And the strangers vanished in the waters' vastness.

But, on the virgin marble of the steps of the entrance,
Somewhat ever reddened by unnatural radiance,
And by gates and arches, everlasting, purest...
Angels drank from goblets of mysterious lures.

"When Curtains Of House Fall..."

When curtains of a house fall down,

And the lamps' mitigating light
Makes peaceful all shadows around,
I hear the song of delight.

I needn't the astonishing glow,
The beauty and greatness of the sky.
A curtain, fall down, fall low!
The world, go out and fly!

I have here my books -- lines and letters,
And here my meter plays...
And I know the sweet of the fetters
In the depths of the prisons-caves!

Don't think of something small or earthly,
If blasts a fateful storm above --
And don't be shameful of your fear,
Just bend your head before your dear.
Your pliant heart is joining, gladly,
The Genesis by means of love.

Your love comes like a cloud, potent.
Pray, when you've caught it in your sights!
Don't let your heart be too persistent,
Don't step aside, but be assistant!
Regardless of who's brought the goblet --
It has a gift of sacred heights.