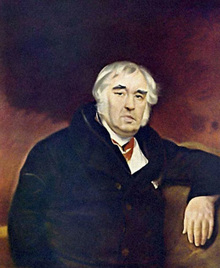 Ivan Andreevich Krylov was a Russian poet, fabulist, translator and writer. He is the author of more than 200 fables.

Krylov was born in Moscow into the family of a poor army captain. He did not receive an exceptional education, but his parents paid great attention to his upbringing, and with time, he became one of the most learned people of his era. When he was six, his father resigned from the army and the family moved to Tver. There, the young fabulist impressed the local landlord Nikolay Lvov with his poetry and the landlord allowed him to study together with his children.

Krylov’s father was assigned to work for a local county court, although it was just a formality, as he almost never appeared in the office and didn’t receive any salary. In 1778 his father died, leaving a chest filled with books as Ivan’s inheritance. Krylov’s mother tried to get a pension, but was turned down and the family ended up in poverty.

Five years later Krylov moved to St. Petersburg to work as a regional secretary, and soon brought his mother and younger brother Lev to the capital. Despite his work, literature was his main occupation at the time. This did not change when his mother died and he was left to take care for his brother alone. At the time, Krylov wrote mainly for the theater. He created the librettos for the comic operas “The Coffee Box” (“Kofeynitsa”) and “The Rabid Family” (“Beshenaya semya”), the tragedies “Cleopatra” and “Philomela” and the comedy “The Composer at the Entrance” (“Sochinitel v prikhozhey”). These works brought neither money nor fame to the young author, but they helped him make a place for himself in the St. Petersburg literary circles. He was patronized by the famous playwright Yakov Knyazhnin, but Krylov broke their ties because of his own pride. After that, he wrote the comedy “The Pranksters,” whose lead characters hinted at Knyazhnin and his wife. “The Pranksters” was a more mature work, but the staging of it was prohibited and Krylov had his relations spoiled not only with the Knyazhnins, but also with the theater directorate, upon whom the fate of any dramatic work depended.

Starting from the end of the 1780s, Krylov’s main work was in the field of journalism. In January 1789, he began publishing a monthly satiric magazine called “The Spirit Mail” (“Pochta dukhov”), which derided noblemen’s vices and bureaucracy. However, eight months later the magazine closed down because it had too few subscribers. The following year Krylov left journalism and decided to dedicate himself fully to literature. He became the owner of a publishing house and together with his friend, the writer Klushin, he started to publish a new magazine, “The Viewer” (“Zritel”), which became more popular than the previous one. A year later, it was renamed the “St. Petersburg Mercury,” but at the end of the year, it ceased publication. Krylov left St. Petersburg for several years. There is no accurate information about his life during this period. In 1797 Krylov appeared at Prince Golitsyn’s estate, where he worked as the prince’s secretary and his children’s teacher. 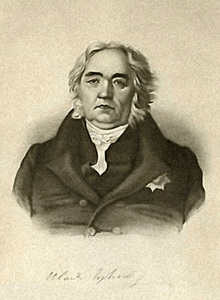 Two years later Krylov wrote the play “Trumf or Podshchipa” for a home performance at the Golitsyns. The pièce ridiculed Emperor Pavel I Romanov and the irony of the play was so pointed that it was only published in 1871. After the Emperor’s death, prince Golitsyn was appointed Governor General of Riga, and Krylov worked as his secretary for two more years before resigning in 1803. The only thing that is known about next two years of his life is that it was the time he started writing fables. Upon arriving in Moscow in 1806, he showed the famous poet and fabulist Ivan Dmitriev his translation of two Jean de La Fontaine fables, “The Oak and the Cane” and “The Picky Bride.” In 1806 Krylov published three fables, before returning to dramaturgy.

In 1807 he wrote three plays that gained major popularity and success on the stage, “The Fashion Shop” (“Modnaya lavka”), “A Lesson For the Daughters” (“Urok dochkam”) and “Ilya the Bogatyr.” The former two were especially successful, as each of them in its own way laughed at the nobility’s attraction to French language, fashion and manners. The plays were staged multiple times, and “The Fashion Shop” was even staged at the royal court. Despite his theatrical success, Krylov quit playwriting and started to devote more and more time to fables.

In a year, he wrote 17 fables, including the famous “Moska and the Elephant” (“Slon i Moska”). In 1809, his first fable collection was published, affording Krylov instant popularity. Krylov worked on his fables until his last days; in 1844 his friends received the last edition of his fables together with the notification of his death.

At first, translations or interpretations of La Fontaine’s fables prevailed in Krylov’s works (“The Dragonfly and the Ant,” “The Wolf and the Lamb”), but he soon started inventing more and more 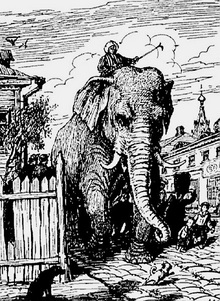 plots of his own, many of which were connected to the burning issues of contemporary Russian life. He reacted to various political events with fables like “The Quartet” (“Kvartet”) and “The Wolf in the Kennels” (“Volk na psarne”). More abstract plots were the basis of “The Curious” (“Lyuboytny”) and “The Hermit and the Bear” (“Pustynnik i medved”). Working in a new genre completely changed Krylov’s reputation. Through the first half of his life he was practically unknown and suffered from money troubles and hardships; now, he was showered with honors and enjoyed universal respect as his books were published in enormous runs.

Together with popular acclaim came official recognition. Starting in 1810, Krylov worked first as assistant librarian, then as librarian in the Imperial Public Library in St. Petersburg. At the same time, he received a growing pension “as respect for exceptional talents in Russia’s language arts.” He was elected a member of the Russian Academy and awarded a gold medal for literary achievements, along with many other awards and honors. Even so, Krylov’s popularity was characterized by a multitude of half-legendary stories about his laziness, gluttony and sharp wit.

Although his fables were translated to the French and Italian languages, Krylov remained hostile to Westernism throughout his life.

Towards the end of his life Krylov suffered two cerebral hemorrhages, but recovered at Empress Mariya Fedorovna’s palace in Pavlovsk. Soon after, however, he died in St. Petersburg. His death was caused, according to various sources, either by over-eating or pneumonia. He is buried in the Necropolis of the Masters of Arts.